To understand Masayoshi Son, the CEO of SoftBank, you have to think of normal ambitions and multiply them by a million or so. That’s why he considers the $100 billion investment fund that he is raising with a Saudi Arabian group only the “beginning” of his future strategy.

Son made this remark alongside Simon Segars, CEO of ARM, in an interview with a small group of press on Tuesday, just before he gave a speech at the ARM TechCon event. Segars said he is happy to have Son as his new boss, as SoftBank just bought ARM for $31 billion. Son said he measures his investment return in decades and thinks about how he can execute on a long-term vision.

And that vision is audacious. He said he wants to make the Singularity happen. That is the day, coined by futurists such as Ray Kurzweil and Vernor Vinge, when machine intelligence will exceed all human intelligence combined. Son said he thinks that will happen in the next 30 years. Son believes that we’ll first see the Internet of Things produce more than a trillion connected devices in the next 20 years. And those devices will lead to the Singularity.

Some notable figures like Bill Gates, Elon Musk, and Stephen Hawking are worried about the creation of artificial intelligence that could turn on humankind. Asked if he thinks the Singularity is a good thing, Son said that it will happen anyway and that it is just like the invention of fire. It can be used as a tool for good or bad.

We also talked about the tough choices he has made, like selling off his stakes in Alibaba and mobile game companies Supercell and GungHo Entertainment in order to buy ARM, which can design the computing technology that we’ll need for the Singularity. 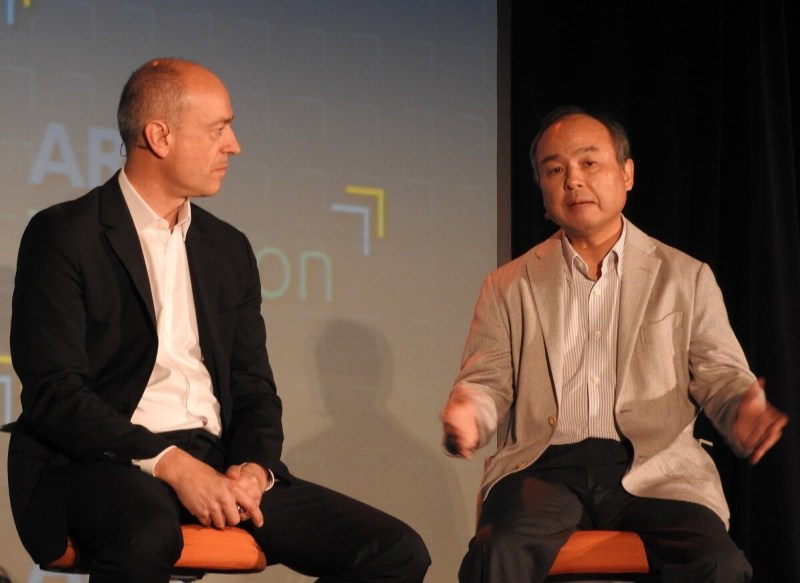 Above: Simon Segars (left), CEO of ARM, and Masayoshi Son, CEO of SoftBank.

There’s always something a bit different at TechCon. This year ARM’s ownership is different. It’s changed in a pretty significant way over the summer, as you all know. But it’s a change that’s going to allow us to move forward with more pace and more scale than we could have done on our own. We’re all excited about this. We know that our developers coming here this week want to understand what, if anything, has changed. How is this going to impact the ARM partnership?

Our mission this week is to explain how the changes people are going to see ahead of us really are for the better. We’ll have the ability to accelerate investment in our road map and bring more technology to market sooner, what we’ve been working on for so many years. Our business model is not changing. We’re just going to do more and do it faster. That’s going to set up a very exciting future for ARM and the ARM partnership.

Masayoshi Son: In my presentation this morning, I explained a little bit more about why I’m excited about ARM. I can explain further if you have any more questions. But I’ll try to give my own expression.

As Simon said, the basic business model isn’t changing. We’re only adding and accelerating. This is something that I want ARM partners to understand. I know there was some concern over the possibility of radical changes to the business model or damage to the ecosystem. We are not going backward, though. It’s the other way. I would rather free up Simon and the team to go more aggressive in developing technologies, deepening their relationship with partners, and investing in other leads. I don’t want them to have to worry about what the next several quarters’ earnings should be and watch the share price every day.

Instead of those financial investment worries, let me worry about financial results. Just believe in the future and direction of the capability that ARM has. Go deep and build a better future, both for the company and for its contribution to the industry. That’s what I want ARM to do, invest more the future.

Question: When you say the same business model, how do you think about pricing?

Son: ARM’s per-chip price has been gradually growing in the past, if that means anything. Not because ARM is trying to raise the price, but because ARM is increasing functionality, adding multiple cores per chip, developing more sophisticated IP, and so on. That’s a natural trend that I won’t touch.

Question: Do you expect further price rises? Anything in the short term?

Segars: What we’ve done is command more on a per-chip basis by offering more value. Multi-cores is a great example, and the move to 64-bit processing. Adding video and graphics. As we bring more value to chips, our revenue per chip has increased. It’s always been our intention to command a higher price by adding more value and that’s what we’re expecting to do. We have a roadmap ahead of us of investments in mobile–

Question: Does the acquisition change the dynamics of your thinking about pricing in any way?

Son: I am not changing the dynamics of anything. It’s just the natural course. 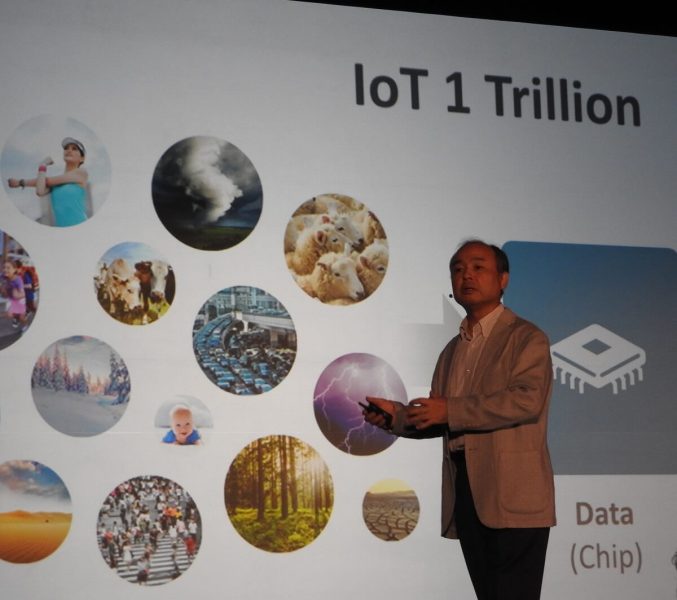 Question: I watched the investment from afar in Supercell and Gung Ho. At the time I thought you would stay in those businesses for quite a long time, but you eventually did sell. I’m curious what was the thinking behind going into games and getting out of it. Do you see any parallel in ARM, since it’s not entirely clear why SoftBank is going into ARM, the same way it was not exactly clear why you went into games and then exited games?

Son: In the last 10 years, I was very impressed and already in love with ARM, quietly. But we did not have enough money. There were not needed synergies to our business that we were already in. We’d just started in PC broadband and migrated into mobile broadband by acquiring Vodafone Japan. Then we had to decide – should we go and acquire ARM at that time, instead of going into Sprint for the same amount of money? Back then it was a more direct synergy for owning mobile business in Japan and expansion to the U.S. But then I came back to the idea of going into ARM.

Now, with the rise of new paradigm shifts into IOT, which I talked about this morning, I said, “The time has come. We can’t wait anymore.” As you know, we have a lot of debt. I’m the king of debt. [laughs] We can’t leverage too much anymore. We had to give up something to go forward with our long-term core strategy. Core to our strategy was ARM. We had to sell something to make the money to invest.

I didn’t want to sell Supercell or Gung Ho. But I had to sell something. It’s not because I don’t believe in their future. It’s because ARM is so critical to our core strategy that we had give up something to maintain balance.