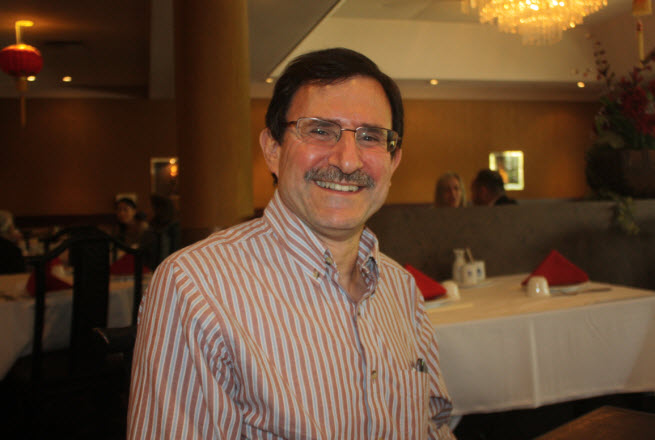 Sol Voltaics is announcing today it has used nanotechnology to build solar cell modules that are up to 25 percent more efficient than the cells currently on the market. If the company can deliver its SolInk material as advertised, then it could make it a lot cheaper to introduce solar cells to a broader set of customers. 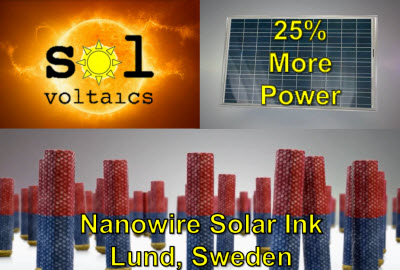 The technology could make solar power in homes and office rooftops much more affordable, which is necessary to increase adoption of solar and help it compete at the same cost as electricity produced from fossil fuel plants. That argument has enabled Sol Voltaics to raise $11 million in funding from public and private Scandinavian investors.

Sol Voltaics’ technology comes from nanotechnology, or the study of materials that are a billionth of a meter in length, and it has been in the works for 15 years at Swedish universities. Now its day has come for adoption in a mainstream business, said Dave Epstein [above], a longtime microprocessor expert (he happened to appear as a cheerful young computer engineer in Tracy Kidder’s Pulitzer-Prize-winning book, “The Soul of a New Machine”) and the chief executive of Sol Voltaics.

“We can increase the efficiency of energy capture, conversion, and storage,” said Epstein. “There’s no smoke and mirrors here.”

Two advances make it possible. The team, led by founder Lars Samuelson (a Lund University professor), created a technology known as Aerotaxy, which makes it cheaper to make nanomaterials. With that, they are creating gallium arsenide nanowires that can serve as solar collectors and that they can integrate directly into solar wafers, known as solar cells. The smarts happens at the atomic level.

The way Epstein figures it, manufacturers don’t have many options for bringing down the costs of solar. Thanks to a worldwide solar glut, economic forces have brought down the costs of installing solar on your roof. And it’s harder and harder to squeeze cost improvements out of everything from the installation process to the modules that hold the cells. The cells themselves must become more efficient to lower costs.

Epstein said about two-thirds of the cost of commercial solar systems involves land, labor costs, and other factors that solar developers can’t directly control. By raising the efficiency of solar modules, Sol Voltaics can give manufacturers a chance to sell more valuable, high-margin products. Solar power utilities will be able to generate more power at a lower price with the same assets.

In other words, a solar company with a big solar panel installation could produce 1.2 megawatts of electricity with the same equipment and land that it currently uses to make 1 megawatt. 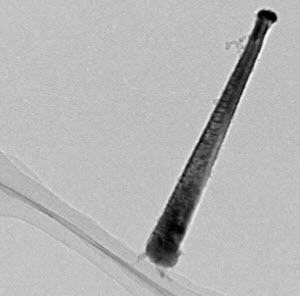 As a material, gallium arsenide has been used in solar for years because of its high reliability and high efficiency at converting light into electricity. Orbiting satellites use solar cells made from gallium arsenide to power their internal systems. But gallium arsenide is expensive to make. SolInk dramatically reduces the cost by minimizing the amount of materials used. A nanowire is just one micron in length and 100 nanometers in diameter.

Less than a gram of nanowires goes into to crystalline silicon panels. Nanowires need only cover a small portion of the surface area of crystalline silicon or thin-film solar cells to benefit from all of the features of gallium arsenide. Right now, rivals such as Innovalight (bought by DuPont) can boost a solar panel’s efficiency from 15 percent to 16.1 percent. But with SolInk, a panel could go from 15 percent efficient to almost 19 percent, or from 20 percent to 25 percent. The theoretical limit in converting sunlight to electricity is around 27 percent to 29 percent.

In a research paper published in the journal Science this year, Lund University and Sol Voltaics researchers demonstrated that indium phosphide nanowires covering just 12 percent of the surface of a solar cell resulted in an efficient of 13.8 percent in converting sunlight energy into electricity. The Fraunhofer Institute, a research center in Munich, certified these results. In another paper published this year in Nature, Samuelson described the process using gallium arsenide nanowires.

With Aerotaxy, the resulting solar cells should be able to concentrate more light in an area. Nanowires are typically made through epitaxy, in machines that grow layers of chemicals on top of wafers. It’s a slow and expensive process. With Aerotaxy, you can build nanomaterials by mixing vapors in the air in just a second. The active materials bond to form larger, uniform structures while in motion.

The upshot: Nanowires are grown in air, literally. And Aerotaxy can help you generate tens of billions of nanowires per second on a continuous basis. It’s like cranking out nanowires with a popcorn popper instead of a craftsman. That’s the makings of an affordable and scalable technology for mass production, Epstein said.

“The results have been far better than we ever expected,” said Samuelson. “We understand how different materials react or bond to one another. With Aerotaxy, we essentially create an atmosphere where we can better harness those physical and chemical properties.”

Sol Voltaics will sell SolInk to solar cell and module manufacturers. A manufacturing process can go into existing solar factories to handle the insertion. The company plans to produce gallium arsenide nanowires for demo purpose by the end of 2013, and pilot commercial production is expected in 2015.

Demand for solar is growing globally, with the total number of gigawatts expected at 29.8 in 2012 to 50.8 gigawatts in 2016, according to Greentech Media. Epstein figures that solar is here to stay, since the sun is the only resource that will surely outlast fossil fuels, wind, and other clean energy sources in the long run.

“In spite of what you might hear, solar is a healthy market,” Epstein said.

Sol Voltaics has raised $11 million from Industrifonden, Foundation Asset Management of Sweden, Teknoinvest, Provider, Nano Future Invest, and Scatec Energy of Norway. It has also raised money from public entities including the European Union, Vinnova, and the Nordic Innovation Center. Epstein hopes to raise $10 million to $20 million more this year. Epstein estimates it will take less than $50 million to get the technology from the lab to commercial production.

The company was founded in 2008 and it has 20 or so people. Epstein, who formerly worked as an investor at Crosslink Capital, has also been a consultant to microprocessor companies such as Transmeta. Samuelson is one of the people who picks the candidates for the Nobel Prize in physics. He is a professor at the Lund University department of physics and founder of the Nanometer Structure Consortium and a worldwide authority on nanowires. Magnus Ryde, the former chief executive of TSMC America and 25-year veteran of chip making, is chairman and an investor.

Over time, Aerotaxy could be used to make nanomaterials for power electronics, light-emitting diodes, batteries and energy storage. The company has applied for 40 international patents. Its research partners include the Nanometer Structure Consortium, Lund University, and Lund Nano Lab.

“The promise of nanotechnology has been held back by complexity, low yields and cost. Aerotaxy paves the way for integrating new materials into products in a streamlined manner. This is nanotechnology made simple,” said Alf Bjorseth, Chairman of Scatec and founder of Rec Solar.