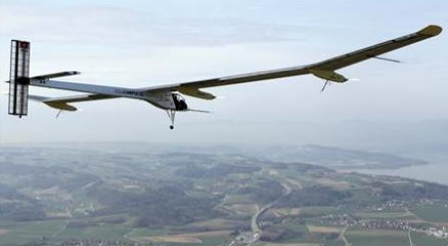 The world’s first solar airplane, the Solar Impulse, passed its first flight test with flying colors — in preparation for a round-the-world trip. The next step will be to see if it’s capable of staying aloft in the dark.

The plane itself is a sight to see, with the same 200-foot wingspan as a Boeing 747, covered in 12,000 solar panels. The cockpit is comparably tiny, and the total machine weighs just 1.7 tons. Its 40-horsepower engine doesn’t take it nearly as fast and far as its fuel-powered peers. During today’s test, lasting just under an hour and a half in the air, it reached a top speed of 44 miles per hour and an altitude of about 4,000 feet.

The Solar Impulse has been lagging behind schedule. The goal is to have it take off on its round-the-world journey by 2012. To hit that deadline, today’s test was supposed to take place in 2009, but the technology wasn’t there. But having successfully taken off and landed — and executed a few turns — running exclusively on the sun’s energy, it should be ready for the next phase this summer: a 36-hour flight that will determine how well it performs at night.

The plane is equipped with lithium polymer batteries that should be able to hold enough energy generated during the day to keep it flying when the sun is no longer shining. Today’s test was actually meant to put these batteries through the paces. While the Solar Impulse will usually rely on the sun’s rays during the day, its maiden voyage ran exclusively off the batteries, which were fully charged beforehand.

It’s way too early to tell what impact solar aviation technology will have on commercial or military flight. But, just like the first planes running on biodiesel fuel, this could be a harbinger of things to come.

The plane, based in Switzerland, has been in development for about seven years. The culmination will be the round-the-world flight, accomplished in five hops and six days. Here’s a video of today’s test, which drew a considerable crowd: