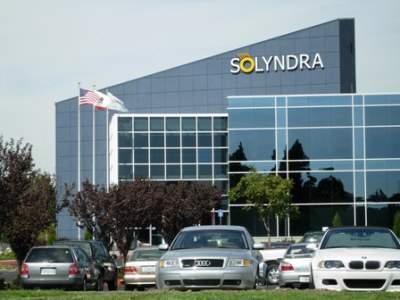 Solyndra, the maker of cylindrical solar cells that filed to go public late last December, has withdrawn that filing from the SEC, choosing instead to raise $175 million by selling convertible promissory notes to some of its existing investors. The news spells trouble for the rapidly growing company, and its thin-film solar peers.

While this amount should be enough to keep the company’s plans on track for now, it’s still falling far short of the $300 million it had hoped to get from its public sale. It has cited the volatility of the public capital markets as its chief reason for canceling the IPO, but things haven’t been looking up for the company itself for a while now.

The Fremont, Calif.-based company was able to secure a $535 million loan guarantee from the U.S. Department of Energy, propelling it to the top of the venture-backed solar flock. But in April, an audit mandated by the DOE determined that Solyndra’s mountain of debt and consistent losses could present a real problem. Even then, analysts predicted that this revelation, stapled to its S-1 filing, could dash the company’s IPO dreams.

On top of Solyndra’s own problems, it’s facing a public market that hasn’t been so hot on cleantech lately. Both biofuel maker Codexis and Chinese solar firm Jinko Solar went public in recent months, with shares selling at the low end of their price estimates. Solyndra would have probably met the same fate if it carried through on its filing.

The $175 million will give the company a much shorter runway toward the construction of its second manufacturing complex in Fremont, but it should still come online by the end of this year, the company says. If it can make its unique cylindrical thin-film solar panels at the ambitious scale its predicting, it might be able to survive. But it’s going to be a squeaker.

Solyndra has been working on this manufacturing plant — the one President Barack Obama visited late last month to raise the company’s profile and stump for climate legislation — since fall of 2009. The DOE loan funds are also going to be used for this purpose, in addition to $198 million in equity raised from Argonaut Ventures. This may be enough to get the plant up and running, and it’s doubtful that the DOE will allow one of its high-profile cleantech selections to fall on its face, but this remains to be seen, and depends heavily on Solyndra’s burn rate.

For now, the company says it is confident that, with 300,000 panels already sold, it will be able to churn out 300 megawatts worth of panels every year by the end of 2011.