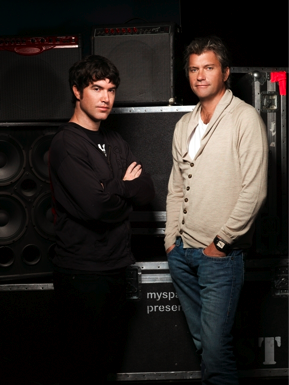 There’s a one-source rumor going around that MySpace co-founders Tom Anderson and Chris DeWolfe may leave the social network and parent company News Corp. when their contracts expire next October. The rumor could be true, it could be just a negotiating tactic to help them bargain for more than the $15 million they’re each reportedly getting, or it could be entirely false.

Looking at MySpace’s present position, I’d be surprised if they left anytime soon. For now, the only comment they or MySpace have offered up is the following canned statement from DeWolfe, MySpace’s current chief executive.

Tom and I are very happy at MySpace—we love the people, the product, and we believe in the future of the company. We are not thinking of leaving—our heads are down and completely focused on building a profitable, scalable business.

DeWolfe is referencing a few pretty strong data points about his and MySpace President Anderson’s performance over the past several years. I’ll spell out what the company has been up to under their leadership.

It has grown from 20 million to 130 million monthly unique visitors since it was bought for $580 million in the fall of 2005. It has focused on making money much more than rival social networks like Facebook — and brought in more than $800 million in revenue last year, the most out of any English-language social network (that I am aware of). It has been busy rolling out a range of new advertising services, like its self-serve MyAds.

On the product side, it has also been busy. It has come out with its MySpace Music site for streaming playlists and other features within the social network, which may have managed to inspire a little envy in Facebook founder Mark Zuckerberg. It is working on creating interesting products like a sophisticated in-site email service — with some new group features introduced for that just last night. It also launched a developer platform, which, although a follow-up to Facebook’s still-larger one, has created new business opportunities for third-party gaming application developers, and others. It has been pushing forward new ways of accessing MySpace data on other sites through its still-young service called MySpaceID. In that effort, it has been working closely with Google, Plaxo, and a range of other companies that promote open standards for sharing social data across the web. The company has a lot more planned for MySpaceID, as I’ve understood from previous conversations with some of its lead engineers.

Most recently, MySpace has been making a hard push into mobile devices, doing things like partnering with carriers and manufacturers to get its applications on more devices. DeWolfe himself gave a keynote about this at the Mobile World Conference last week. VentureBeat contributor Matthaus Kryzkowski did an extensive interview with MySpace mobile executive John Faith at the conference, where Faith discussed the company’s efforts to make its site accessible on mobile browsers and in apps on every phone. Faith said he sees half of all MySpace users accessing the site through mobile devices in the next years. Mobile, in turn, is creating new opportunities for the company to sell ads. This effort also dovetails with its plans to get its user data everywhere it (securely) can. As Faith told us:

What I think is that you see a movement in the industry to more integrated and aggregated address books. So that’s not just complementing or supplementing information from your address book at MySpace, but also integrating all the user’s networks into one single address book.

Among the more intriguing areas that MySpace appears to be headed with its mobile service, one could be streaming playlists on mobile devices — MySpace Music but on your phone.

The more negative spin to MySpace’s story over the last couple of years is that Facebook passed it last year to claim the title of largest English-language social network in the world (as I discussed yesterday, rivals like Qzone are also gunning for the title of largest overall). Facebook has grown across demographics around the world and redesigned itself into more of a feed-based service for sharing information. MySpace has maintained its focus on content, with its music and video services, which has kept it popular with younger users but doesn’t seem to have helped it gain older ones. That’s one reason why a “News Corp. insider” recently told The Business Insider the following:

MySpace CEO Chris Dewolfe’s not to be underestimated, but “the bloom is off the rose.” [News Corp owner Rupert Murdoch] doesn’t like two things: Getting beat and seeing execs in the press. Facebook is beating MySpace and profiles and interviews are everywhere all the time. He went to Davos this year. A bigger role in operations is not in the cards.

Not to be underestimated, plus a bigger role not in the cards? Seems contradictory. But an open question is where MySpace might be placed within News Corp.’s reshuffling management structure. The publicly-traded company’s chief operating officer, Peter Chernin, is planning to depart at the end of June. Executives in News Corp. have considered themselves either Chernin or Murdoch guys, and DeWolfe is the latter.

Given what we know and don’t know, it’s hard to see why DeWolfe and Anderson would leave now. Despite competition from Facebook and other social networking sites, MySpace has proven itself able to make money and develop a wide range of promising products under their leadership. And, more sentimentally, this is the company they helped found and grow. Now their professional reputations are tied to MySpace’s future. Where else would they rather be working?