A fake “Bloomberg” website that claimed Twitter is the target of a $31 billion acquisition has sent Twitter’s shares soaring.

Hosted on a new Bloomberg.market domain that mimics the real Bloomberg site, the article stated: “Twitter is working closely with bankers after receiving an offer to be bought out for $31 billion, people with knowledge of the situation said.”

Though the article looked genuine enough at a glance, and the story was believable given it was based on previous rumors that Twitter could be acquired by Google, Bloomberg spokesperson Ty Trippet confirmed in a tweet (ironically) that this was a fake story, dispelling any lingering notion that Bloomberg may have introduced the .market domain itself.

On closer inspection, the text within the fake story did reveal some clumsy copy — a rogue “it’s” rather than “its,” a double “to,” and they even spelled former Twitter CEO Dick Costolo’s name wrong (“Costello”) — a sign that this wasn’t the work of a professional outfit. 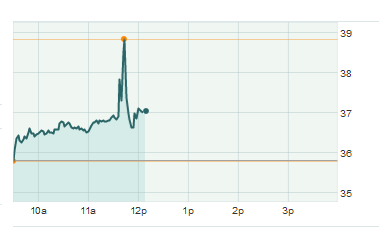 Twitter’s share price has been in decline since April, falling from more than $50 to almost $30 off the back of disappointing Q1 financials.

Following the fake article today, the price rose to a peak of nearly $39, after a day low of under $36. At the time of writing, its price still remains higher than when the markets opened, so it will be interesting to see what the impact this story has when the markets close later today.

This helps highlight the impact that media reports can have on the stock market. But more than that, it also shows how easy it is to copy a renowned publication and have a significant, albeit temporary, impact on a multi-billion dollar company such as Twitter.

Twitter is working closely with bankers after receiving an offer to be bought out for $31 billion, people with knowledge of the situation said.

Shares of Twitter have declined 35% since last reporting earnings and the company has recently become the subject of intense speculation as to its future.

Last month, upon announcement that chairman and co-founder Jack Dorsey would be appointed interim CEO while they searched for a new leader, Twitter stock rose 8%. It was a clear signal from Wall Street that it was happy the company decided to part ways with ex-CEO Richard “Dick” Costello.   Under his leadership the company struggled to add new members and generate more revenue from it’s ad products.

While a deal is expected to to be reached, bankers may rebuff any suitor or work out an eventual sale, the people said asking not to be named as the information is private.

In the past, Google has been named most likely to buy the micro-blogging site, but the people said there was also strong interest from an un-named foreign buyer.