You’ve seen Framestore’s work before. The visual effects studio’s digital fingerprints can be found in some of the most successful films of recent times like Avengers: Age of Ultron, memorable commercials such as Shell’s Shapeshift promo, and even a few VR apps including the upcoming Fantastic Beasts And Where To Find Them experience for Google Daydream.

But what you might not have seen is something Framestore actually made from the ground up. By that I mean something the studio owns, an IP it created to utilize its own storytelling and technical talent for projects that actually mean something to itself beyond a paycheck at the end of a few months’ of work.

That’s where Framestore Ventures comes in. This is an internal group that is building a stable of IP and products that the company has complete creative control over.

“We have some of the best artists and technical folk in the world working here and they’ve all got brilliant ideas and create ideas for clients and they also create ideas in their heads for themselves but have nowhere to put them,” Gaby Darbyshire, Prinicpal of Ventures, tells me. It’s an exciting prospect, the thought of taking the immense talent housed under Framestore’s various offices and switching their focus from the corporate to the creative. What’s even more exciting is that the group is working with the company’s dedicated VR studio.

Quietly announced earlier this month, Somnia is the latest in a growing trend of narrative-driven VR experiences that aren’t necessarily games so much as interactive stories. Like Jon Faveru’s Gnomes and Goblins or the upcoming Darth Vader Star Wars story, it casts the audience as an actual character in the world that they’re free to explore, but they won’t encounter any significant challenges or mechanics to block their path to the end. They’re there to experience a story in an intimate, personalized way, not triumph over evil or rack up high scores.

This story in particular is one of both sci-fi and, based on the first trailer horror. 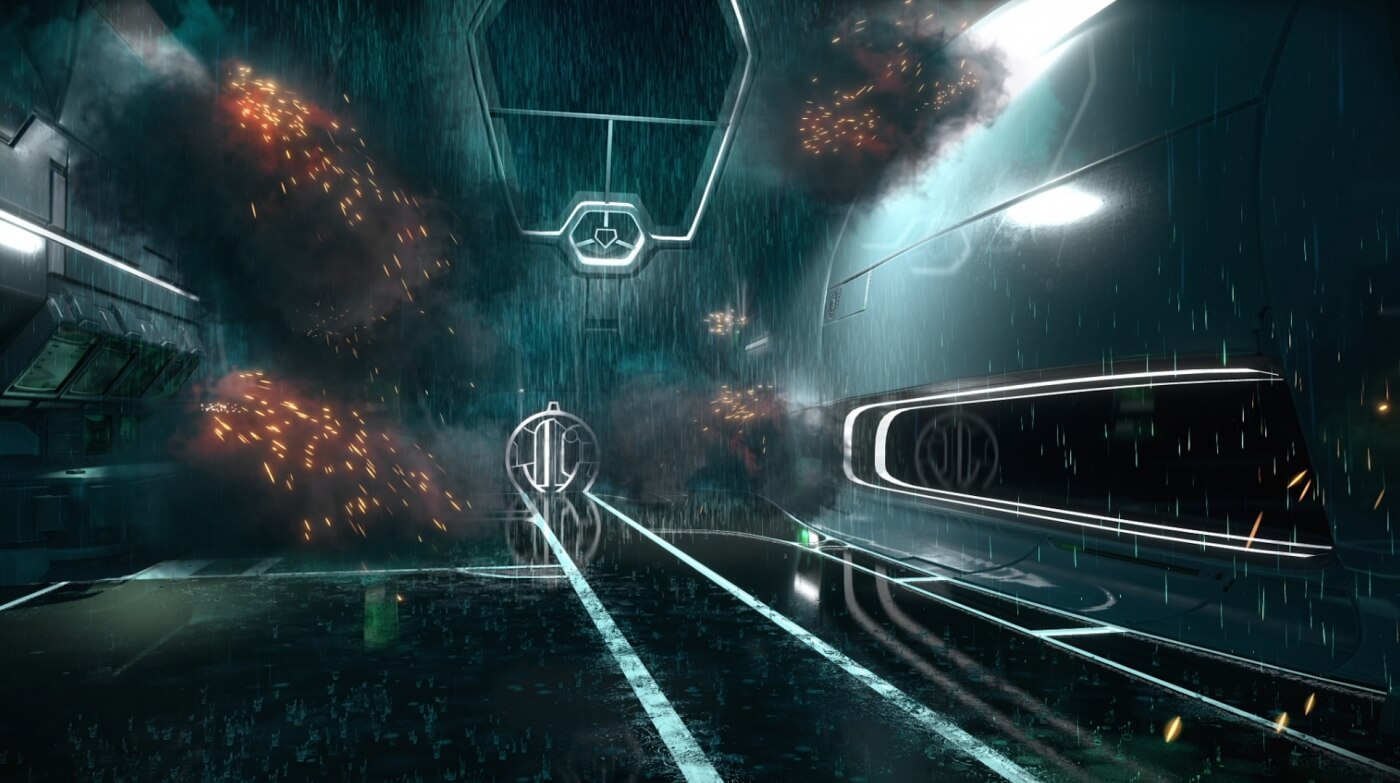 Above: A glimpse at Somnia.

I first heard about Somnia through a tie-in comic book that accompanied the launch of Madefire’s Gear VR app a few weeks back. Framestore itself is an investor in Madefire, and supporting its new venture with a tease of what’s to come made sense for the company. “Our guys can pitch projects internally to be a part of the Madefire slate and we will do the art and script development and everything else to make it happen,” Darbyshire explains of the pair’s relationship. One of those pitches was for an origins story for the upcoming app.

“The comic book tells the backstory of one of the characters and some of the technology involved in the core Somnia story, or the origin of how we came to where we are in the story now,” Michael Cable, Technical Director of the VR group, tells me. In the actual experience, you’ll awaken to find yourself alone on a spaceship in the middle of a journey to save your planet. As you explore, however, you’ll encounter “unusual happenings” including the appearance of ghost-like characters seen in the trailer. “They start off just being glimpses out of the corner of your eye but you getting the feeling that there’s something other-world going on,” Cable says.

From the sounds of it, Somnia could have easily been a survival horror game with full mechanics, but that idea isn’t of interest to its creators. 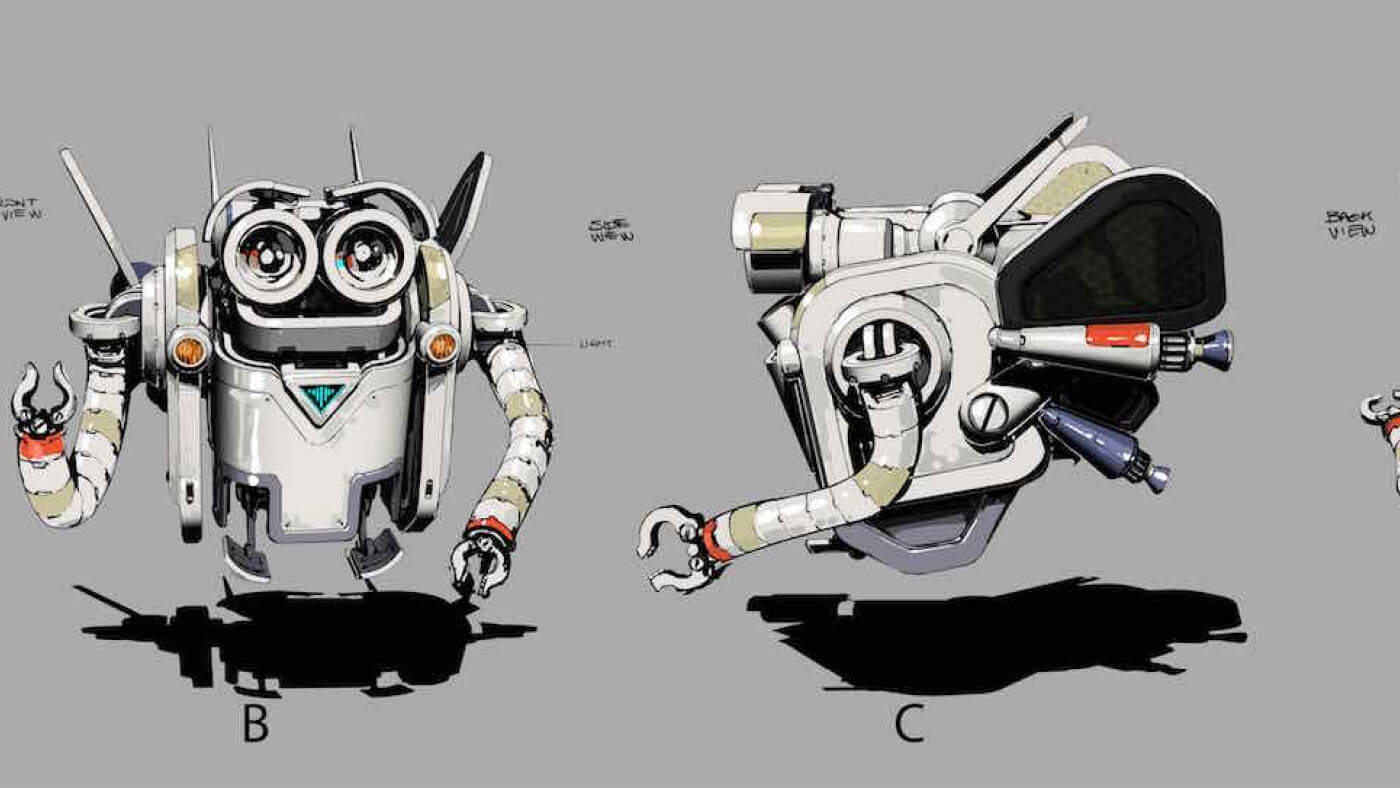 Above: The eyes are what make robots cute.

“If VR is going to be a medium that’s wider than gaming and given the incredibly high costs of making beautiful, high-fidelity games, an easier chance of doing it in the short term until we figure out what the install base is going to be and how popular it’s going to be as a medium is to do something a little less complicated than a game and slightly less narratively complicated than a movie,” Darbyshire states. Framestore describes this as a “sweet spot” while the processes of making full VR movies remains uncharted.

Hitting that point home, Cable talks of early cinema and the struggle to make sure shooting was consistent. “We’re in that sort of point with VR,” he says. And Cable is one to talk; he’s been working on on tech since the days of the Oculus Rift DK1, developing Framestore’s Game of Thrones: Ascend The Wall experience.

It’s still early days for Somnia right now. It’s releasing in 2017, though Framestore wouldn’t confirm any launch platforms. It did state they would like it to be on all headsets eventually.