When John MacFarlane, Craig Shelburne, Tom Cullen, and Trung Mai founded Sonos in 2002 to develop high-end audio hardware for the home, they surely never envisioned a future in which AI-imbued portable speakers would become ubiquitous. After a few false starts, like Amazon’s now-discontinued Echo Tap, stereos like Ultimate Ears’ Megablast (which features Alexa) and JBL’s Link 20 (with Google Assistant) now fly off store shelves at a steady clip. Even Bose, which for years was loath to offer a “smart” portable SKU of its own, earlier this month took the wraps off of a Wi-Fi and Bluetooth speaker designed to be carried around like a knapsack.

The roughly $18 billion home audio market’s shift toward portables threatened to leave in the dust Sonos, which competes both against incumbents like Yamaha, Marshall, Riva, Klipsch, and Bluesound and against tech giants Apple, Google, Amazon, and others. But this week, the Santa Barbara, California-based company finally filled its portfolio’s gap with the Sonos Move, a battery-powered speaker designed for outdoor listening.

“The Sonos Move really builds on the last 17 years of everything that we’ve done … and everything that we learned, but it also breaks from a kind of rigid ideology we had that was holding us back from becoming the world’s leading sound experience company,” Sonos CEO Patrick Spence told reporters during a press conference at New York City’s Milk Studios, adding that a portable speaker has long been one of the most popular wishlist items in Sonos’ customer surveys. “Listening doesn’t stop at the front door, right? People want to listen to their backyard, and they want to listen to the beach.”

The bulk of the Move’s components are housed within a tall, jet black cylindrical cabinet (9.44 x 6.29 x 4.96 inches) encasing a matching shadow black grill. Two Class-D digital amplifiers are tuned to match a downward-firing tweeter (for high-frequency sounds) and a mid-woofer (for mid-range vocals and deep bass), along with a four far-field microphone array for voice recognition and noise cancellation.

The Move weighs in at a hefty 6.61 pounds, and it’s certified IP56 for protection against dust and water ingress (but not water immersion). Spence claims that rating belies its true robustness — Sonos’ durability trials involved not only dropping the Move on concrete, but testing how well it held up against hazards like sunscreen, condiments (like mustard and ketchup), sand, dirt, sweat, extreme temperatures (from 14 degrees Fahrenheit to 131 degrees Fahrenheit), and UV rays. 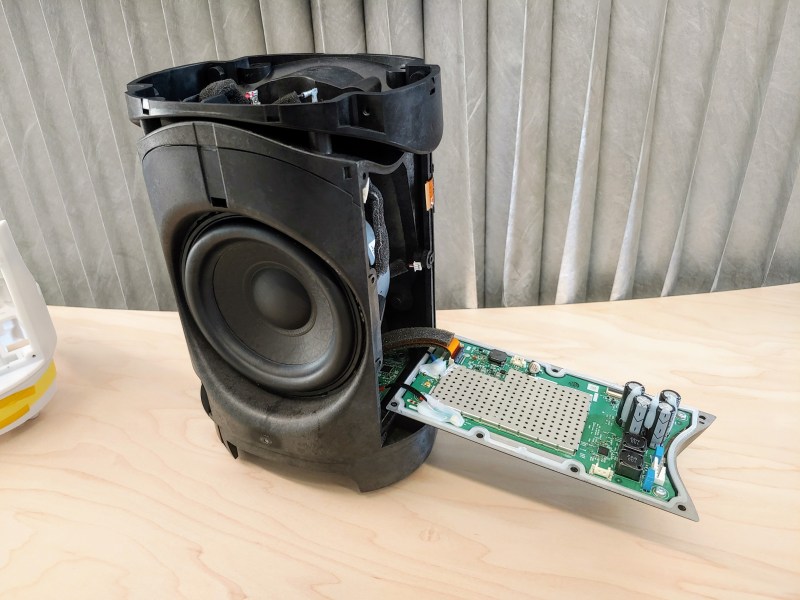 Above: Inside the Sonos Move.

“We think it sets a new bar for durability in the space,” said Spence.

Capacitive playback controls sit atop the Move, adjacent to LEDs that communicate the speaker’s status and indicate when the microphones are active and listening. Flipping the speaker around reveals a power button and a Wi-Fi/Bluetooth toggle centered in an oval-shaped recess.

The USB-C port below the power button can charge the Move, but included in the box is Sonos’ preferred solution: an oval-shaped base with embedded metal pins that make contact with corresponding pads on the Move. Its sides slope inward toward the center, ensuring a painless docking experience every time. 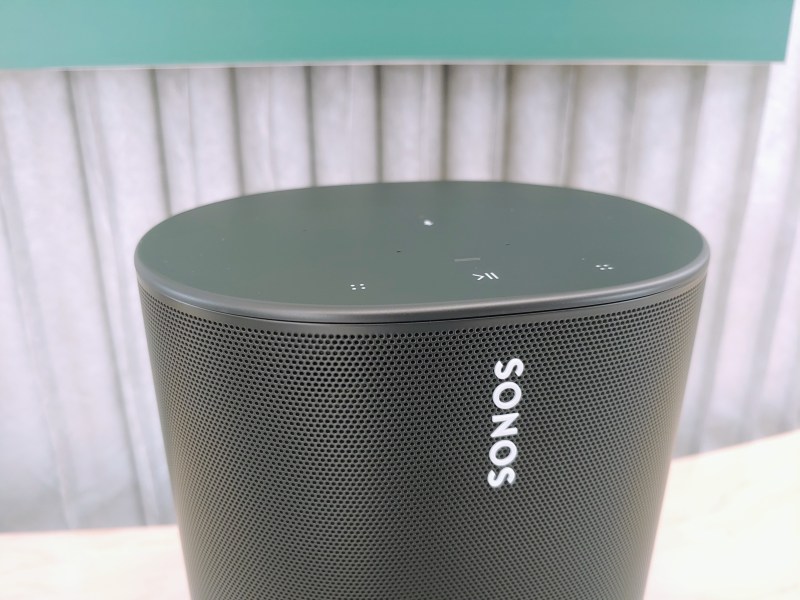 “Just picking up the cord and plugging [it in] becomes another action to take,” Sonos creative director of experience planning Youjin Nam told VentureBeat. “We found out that when there’s a charging base, people take it as a kind of home to bring it back to.”

You won’t have to charge the Move often, in theory. It provides up to 10 hours of continuous playback, or up to 120 hours when in suspend mode.

According to audio technology manager Hilmar Lenhert, each of the Move’s components was carefully engineered to tackle challenges unique to outdoor environments, where the surroundings distort sound in unpredictable ways. “What [we] learned is [that you need] a lot more firepower than you need indoors for a satisfactory experience because the sound just dissipates so fast,” he said. “The second thing that we learned that we [needed] to carefully … control the radiation pattern of the loudspeaker. You want to make sure that everybody who’s in front of the speaker can clearly hear it no matter where you are.”

To this end, the Move boasts Sonos’ Trueplay, which measures how sound reflects off of walls, furnishings, and other surfaces and fine-tunes the tweeter, woofer, and amplifiers accordingly. Previously, Trueplay required the use of an iOS device’s microphone to complete the all-important calibration step, but the Move leverages its built-in array and an on-device algorithm trained on “tens of thousands of data sets” to recognize its surroundings and apply the appropriate correction. 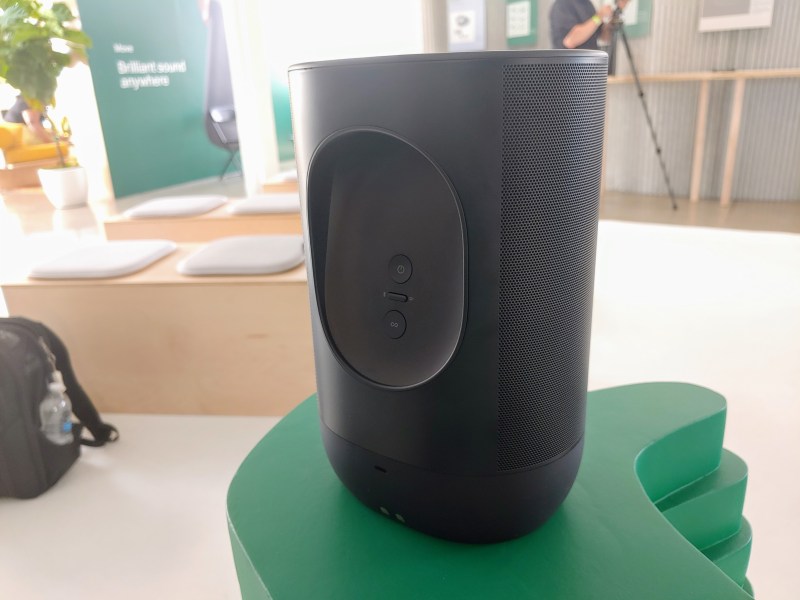 Above: The rear of the Sonos Move.

If that sounds familiar, that’s likely because Apple’s HomePod can similarly recalibrate itself with its built-in microphones, as can the Google Home Max (Google calls it Smart Sound). But Lenhert asserts that the Sonos team accounted for factors most manufacturers don’t, like sound variability in places like campgrounds, patios, and even living rooms and kitchens. Lenhert declined to reveal the Move’s maximum decibel level, but in a brief demo, it managed to project all the way to the back of Milk Studio’s lofty top floor event space.

“Initially, we assumed that all outdoors [have the same sound profile,] but nothing could be further from the truth,” said Lenhert. “[Two] different places … measure and sound completely different. We’re happy with the performance we can achieve indoors, even [in large] rooms.”

The Move connects either via Bluetooth 4.2 (with support for AVRCP and SBC and AAC codecs) or Wi-Fi 802.11 b/g/n (2GHz/5GHz), whichever is available. It works with AirPlay 2 on Apple devices running iOS 11.4 and later, and it integrates with other Sonos speakers when it’s on a local network. 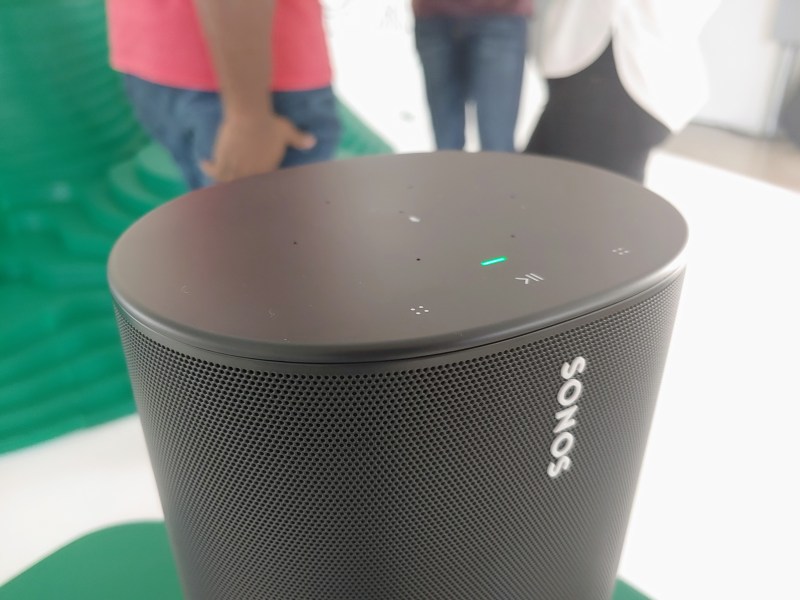 Above: The Sonos Move’s control panel.

Moreover, the Move supports over 100 streaming services via the Sonos companion app for iOS and Android and directly from first-party music streaming apps, including Spotify, Apple Music, Deezer, Tidal, Google Play Music, SoundCloud, and TuneIn. And of course, it features both Amazon’s Alexa and Google’s eponymous Google Assistant, making it one of Sonos’ first products out of the gate with both voice assistants in tow.

A note on the Move’s voice assistant support: You can’t use Alexa and Google Assistant at the same time. That aside, the implementations are relatively fully featured, save the absence of Alexa’s Drop In feature (which lets you use supported Alexa-enabled devices like a two-way intercom) and calling and messaging. You’re able to control music playback and adjust volume, plus set alarms, check the news and weather, get questions answered, configure smart home devices, and more.

If all goes according to plan, the Move will mark the start of a new direction for Sonos, as Spence alluded to in his comments to reporters. In April, the company announced a partnership with Ikea to produce several products, beginning with a $99 bookshelf speaker and $179 table lamp speaker solder under the brand Symfonisk. And soon, Sonos says it’ll begin selling its countries in more countries, addressing critics who assert its limited distribution has held it back.

“We’ll have new form factors [and] new price points we think will bring in millions of new potential listeners into Sonos family,” said Spence. “[And] it doesn’t stop there. We’re going to continue to do new things with interesting partners that we think fit well with the Sonos brand and help complement the kind of products that we build and the experiences we create.” 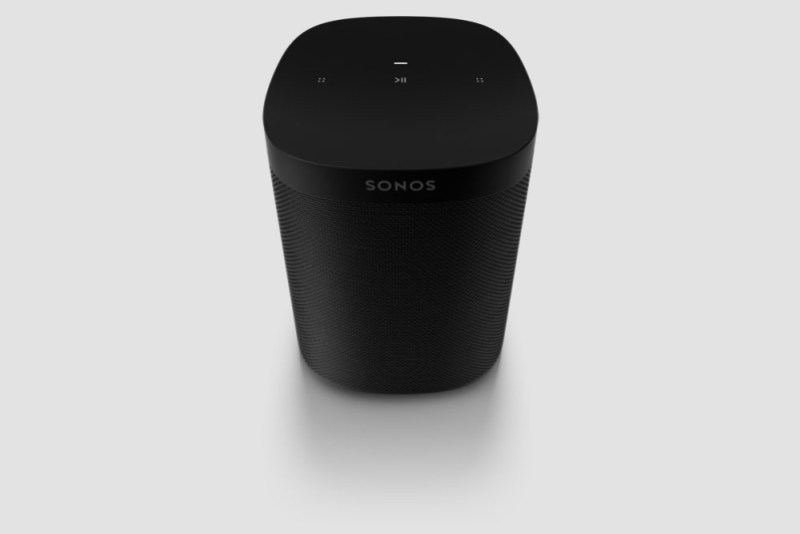 Above: The Sonos One SL.

The Sonos One SL packs dual Class-D amplifiers that self-tune thanks to Trueplay (albeit not automatically, like the Move does), and it can be paired with a second One or One SL speaker in the same room for stereo sound or with Sonos’ Playbar, Playbase, or Beam for rear sound. Like the Move, it supports over 100 streaming services and can be controlled with the Sonos app, AirPlay 2, music service apps, and more. 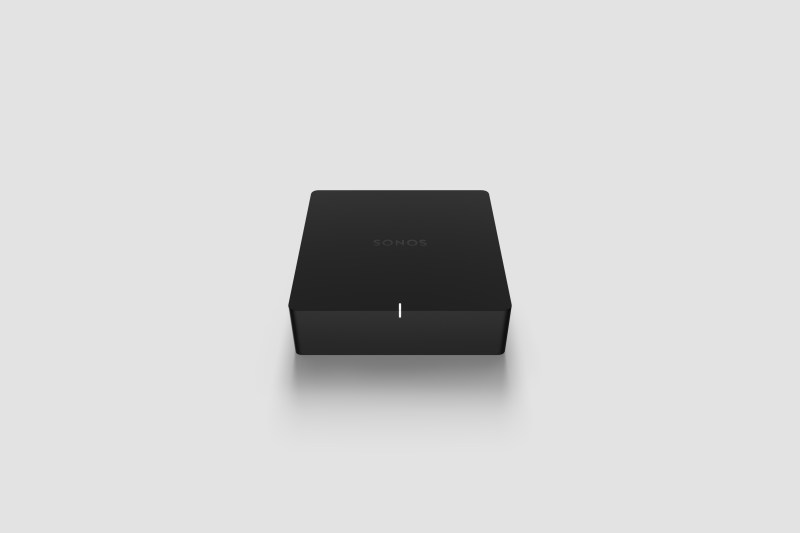 As for the Sonos Port, which was also announced today, it’s a matte black puck with a line-in port and a digital-to-analog converter, as well as a 12V trigger that plugs into an amplifier and imbues it with smart speaker capabilities. It automatically turns on the amplifier when signaled from the Sonos app, and it can be controlled with Alexa or Google Assistant, depending on your preference.

The Sonos Move will be available starting September 24 for $399, while the Sonos One SL will start at $179 and hits store shelves on September 12. The $399 Sonos Port goes on sale beginning January 2020.