LAS VEGAS — Buried within a lengthy CES keynote, Sony pulled out some big media announcements that could change the way we watch TV.

During his opening keynote at the International CES today, Sony president and CEO Kazuo Hirai unveiled a 4K projector that can produce a 147-inch image from an extremely close range.The projector sits right in front of a wall or screen, rather than being several feet away, which should make it far more palatable for consumers who don’t want to deal with a complicated projector setup.

While Hirai didn’t offer up any pricing details, he revealed that the projector will be available during the summer of this year. It’s part of Sony’s new “Life UX” initiative, which aims to make every surface in your home a screen. Sony also showed off an overheard projector that you can interact with, similar to a multitouch screen.

As a movie fan and gamer, I’ve long dreamed about how I would set up a projector inside of my Brooklyn living room. Sony isn’t the first to dive into short-throw projector technology, but it reminds me of the innovative gadgets that Sony used to build. If it’s affordable, and if it works as advertised, it’s a device that could lead many consumer away from television sets, and towards cinematic, wall-filling screens. 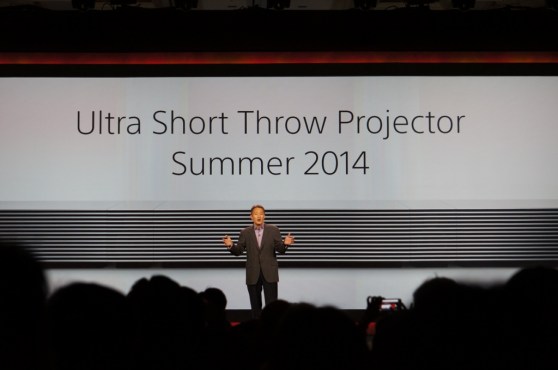 Above: Sony CEO Kaz Hirai in front of its short-range 4K projector

Additionally, Sony Computer Entertainment of America president Andrew House revealed that the company is planning to launch a new streaming television service, which will offer both live TV content and the streaming media you’re used to. Details are sparse, but House says Sony plans to start testing the service in the U.S. later this year.

During the same flurry of announcements, House also revealed that Sony will bring its Gaikai game streaming technology to its Bravia TVs and Vita handheld.

Strangely, failure was a big theme at Sony’s keynote today. Hirai stood in front of several failed Sony products, most prominently a Betamax video player, and noted: “At Sony, failure is not an end — it’s a reason to keep trying.”

The message? Even though Sony missed out on having an incredibly popular smartphone or tablet, the company will keep trying to develop new things.

As he wrapped up his keynote, Hirai made an impassioned claim: “It’s time to move beyond the just good enough era.”

Though he was speaking on behalf of his company, that’s a lesson the entire consumer electronics industry needs to take heed.