A recently published patent from Sony Interactive Entertainment suggests that the company is working on a new VR motion controller, similar to those for the Valve Index. Could this be a new PSVR 2 controller?

The patent for a “Controller Device” outlines an input mechanism for a “home-use game machine” that “detects movement of a user’s hand.” Not only that, but the kit features “a plurality of sensor units that detect the fingers of the user.” These can detect “the proximity or contact of a finger and outputs a finger detection signal indicating the state of proximity or contact of the finger.”

In the image above, you can see a design not too dissimilar to current VR controllers; the user fits their hand into a strap and wraps their fingers around the back of the device to grip.

The sensor units mentioned above are placed where the fingers would rest just like the sensors on the Index controllers or those embedded in an Oculus Touch controller. When the fingers are wrapped around the sensor, the controllers can relay that information to a given VR game and reflect the user’s in-game hands as making a fist or grabbing object. When the sensors can’t find a finger, they’ll assume it’s extended outwards and reflect that in-app.

Again, this has been a feature in PC VR setups for a few years now, but no such feature exists in the PlayStation Move motion controllers for the original PSVR. Given the timing of the patent’s publication, this could indicate that Sony is looking to implement this type of finger tracking into new motion controllers for its rumored PSVR 2 headset, thought to be launching for the upcoming PS5 console. 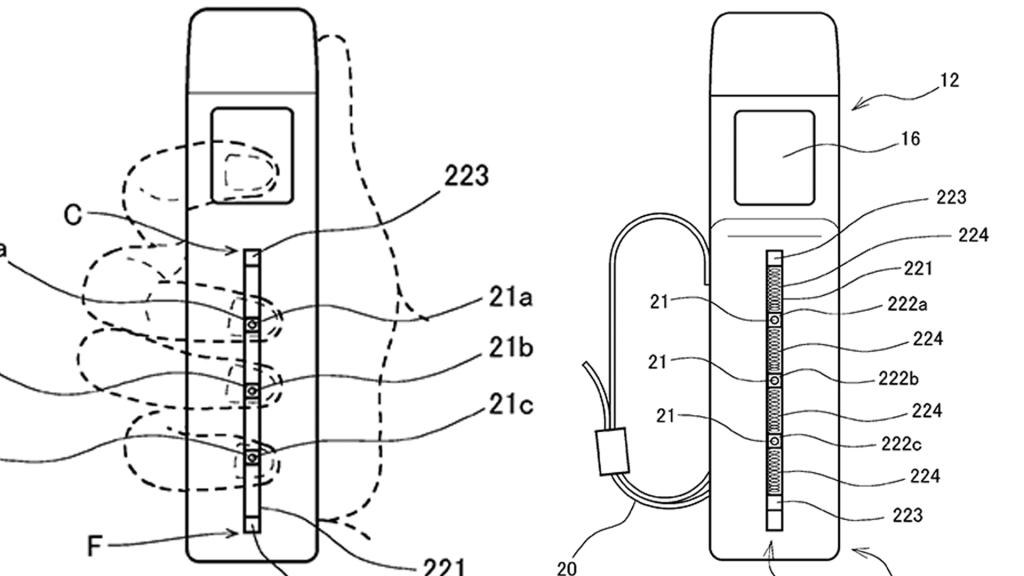 The drawings also show a strap for the user’s hand that could, in theory, allow players to let go of their controller and have it remain in their hand. In this way, the controller may be able to simulate the grabbing of virtual objects, much in the same way Valve’s Index controllers do.

Meanwhile on the front of the device, we can see what looks like four face buttons with what could either be a fifth larger button in the middle or, possibly, an analogue stick, a feature that’s sorely missing in the current Move controllers for PSVR.

However it doesn’t sound as if Sony has settled on a definitive means of tracking fingers, at least according to the patent. At one point the text says the sensor units could be configured by either an “electrostatic sensor or an infrared sensor” as examples.All that said, this is of course just a patent and in no way an indication of the final design of a potential new motion controller for a potential PSVR 2. In fact, we’ve seen other patents from Sony for a similar product sporting an entirely different design.

We do know that Sony is implementing some exciting features into its next DualShock controller for PS5, including triggers that can apply resistance when squeezing and improved haptic feedback. We’re hopeful these features find their way into a new PSVR controller too. But we’re not expecting PSVR 2 to launch alongside PS5, which hits this holiday season, so we’re likely in for a long wait before these features are confirmed.