Volumetric 3D displays are neither easy to produce nor common, as holographic imagery generally requires a mix of stereoscopic screen technology and unique optics, sometimes backed by high-speed eye tracking. Today, the display experts at Sony are throwing their hat into the ring with a new option called the ELF-SR1 — also known as the Spatial Reality Display — which is initially being targeted at professional users in content creation businesses, but with an eye towards future use in consumer-facing applications.

Resembling a traditional computer monitor fixed on a 45-degree recline with a triangular frame, the Spatial Reality Display combines a 15.6-inch screen with a micro optical lens coating and an eye-tracking camera. While the display packs a conventional 4K resolution, the pixels are effectively split into twin 2K arrays for your left and right eyes, using live pupil tracking data and precision alignment of the micro-lenses atop pixels to deliver sharp, realistic 3D imagery. The results are digital 3D objects that appear to be floating right in front of the screen, and switch perspectives smoothly as your head and eyes move.

In other words, if you can imagine computer-generated holograms coming to life and being viewable from whatever angle you prefer relative to the display, that’s what Sony is promising here. Apart from the laptop-like screen size, the only catch is that the volumetric imagery only looks optimized for an audience of one person at a time.

Similar technology appeared in consumer form within Nintendo’s 3DS, but it was obviously far lower in resolution and initially suffered from major headache-inducing issues due to the absence of eye tracking. Beyond using over 40 times as many pixels, Sony’s implementation independently tracks the viewer’s pupil positions on three axes — up-down, left-right, and forward-back — on a millisecond level, enabling the screen to dynamically adjust and render what the viewer needs to see in real time. A “powerful” Windows PC running either Unity or Unreal Engine is required to actually create the 3D content; Mac support is expected in the future. 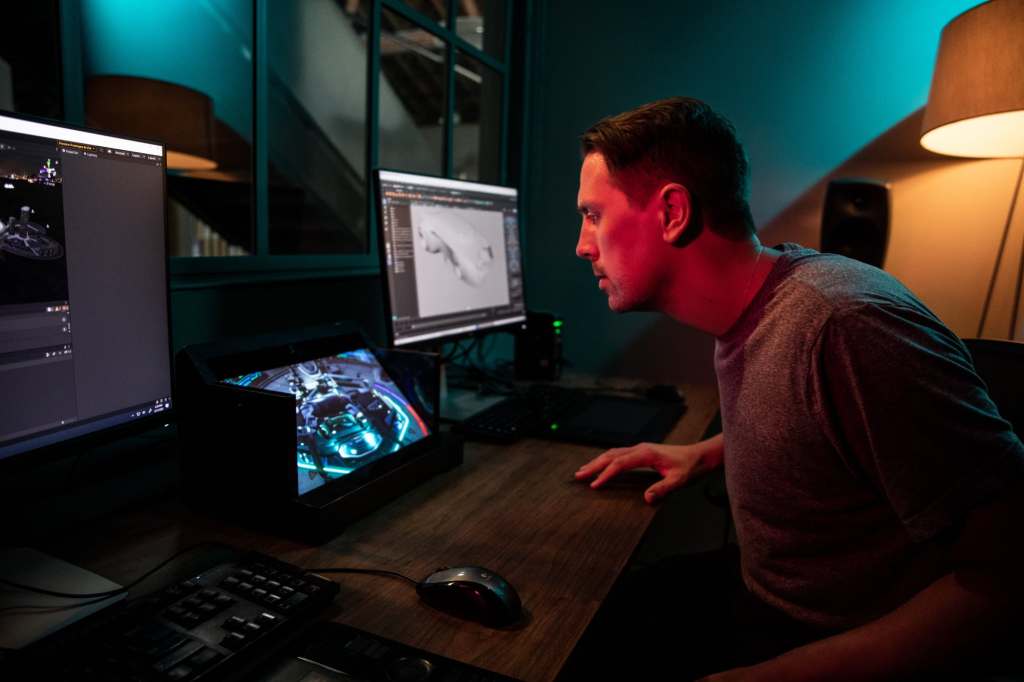 For the time being, Sony is targeting content creators in the 3D computer graphics field, including filmmakers and animators (such as the Ghostbusters: Afterlife team at Sony Pictures), automotive product designers, architects, and VR/AR content creators. 3D models and environments can be previewed in volumetric and realistic ways, enabling creators to adjust lighting, test object positioning, and check camera blocking ahead of finalizing scenes.

Sony expects that film previsualization will be a major use of the technology in the future. Another suggested use of the Spatial Reality Display will be in car dealerships, enabling customers to examine realistic customized car models without needing to actually see the vehicles in person. Judged against 2D displays, ELF-SR1’s raw specs aren’t exactly mind-blowing — 500 nits of brightness, a contrast ratio of 1,400:1, and approximately 100% of Adobe RGB in color gamut, with an undisclosed refresh ratio — but Sony is confident that users will be wowed when they see the 3D effects for themselves. The unit has 2.1-channel speakers built in and can be paired with optional accessories such as a Leap Motion gesture controller for input or a Sony-crafted stage-like box to contain content and block ambient light.

The ELF-SR1 Spatial Reality Display will sell for $5,000, within the same general price range as rival products from companies such as Looking Glass. It will start shipping in November 2020 and can be ordered directly from Sony’s website.