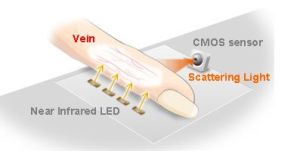 Biometric identification technology is taking a step toward the weird: Sony has unveiled a way to authenticate your identity based on the patterns of your veins.

The technology, dubbed Mofiria, could show up on mobile phones within a year. It uses a complementary metal oxide semiconductor (CMOS) sensor to capture light scattered inside the veins of your finger. The data can be compressed and stored in gadgets with authentication built into them. That makes it much easier to store and retrieve on a mobile device.

So, instead of swiping your finger across a reader on your laptop, you can have the reader scan your veins. Sony claims this is a lot more accurate and faster than fingerprint or retinal scans. The authentication can happen a lot faster than you can type in a password as well.

Sony says it takes 0.015 seconds to identify someone using a typical computer and about a quarter of a second with a mobile phone. It is accurate about 999 times of out 1,000. Rivals such as Hitachi and Fujitsu have been working on similar technology. You can imagine it being used on steering wheels to identify drivers, or with ATM machines.

This is pretty clever. It reminds me of the Admit One system for identifying people by recognizing the patterns of their keystrokes.