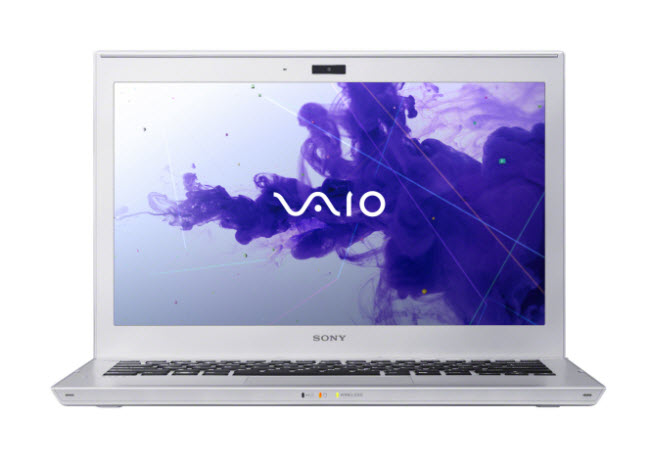 Like many other PC makers, Sony is launching its back-to-school line-up of new laptop computers based on Intel’s Ivy Bridge processors. These new machines include the Vaio T series Ultrabook (pictured above) and a bunch of other new models.

Now 15 years old, the Vaio line-up is usually one of the closest contenders on the Windows side of the computer market that is a match for Apple in terms of design elegance. This new line-up is no different and continues the Vaio focus on top-notch audio, video, imaging, and software technology.

The Vaio T series Ultrabook uses the Ultra Low Voltage Intel Core processors (or the older Sandy Bridge Intel processors) to offer high performance and responsiveness in a slim magnesium and brushed aluminum chassis. The T series has a 13.3-inch display, an optional solid state or hybrid drive, and a bunch of ports for adding media. It’s a little chubby at 3.5 pounds, but it packs a lot of performance, said product manager David Ng. The screen isn’t backlit, but the typing experience is pretty good. (That extra backlit keyboard would have added too much thickness to qualify it as an Ultrabook under Intel’s specifications). It has 7.5 hours of battery life.

Sony has also made enhancements in the E, S, Z series laptops and in the L All-in-One series desktops.

“Thin and light is nothing new to Sony — we built the T Series Ultrabook from many of the same features as our amazingly thin and powerful ultra-premium Vaio Z Series, which has long exceeded Ultrabook specifications,” said Mike Abary, senior vice president of Networked Technology and Services Division of Sony Electronics. “Our entire new Vaio portfolio incorporates the best technology from our innovative digital imaging, sound, and TV divisions and unique features across all the models such as backlit keyboard and Sony’s Rapid Wake technology.”

The Vaio E series is targeted at students. It has 11.6-inch, 14-inch, and 15.5-inch versions. It has an aluminum case and a diamond-cut Vaio logo. The larger ones include backlit keyboards and AMD Radeon graphics. The 11-inch model has an AMD Brazos processor, while the 14-inch has a second-generation Intel Core processor, and the 15-inch has an option for the Intel Ivy Bridge processor (third-generation Intel Core), which combines a microprocessor and graphics on the same chip.

The Vaio S series uses a combination of magnesium, aluminum, and carbon fiber materials to save weight. It has 13.3-inch and 15.5-inch display versions, Nvidia graphics, backlit keyboards, and options for solid state or hard drive storage. It uses Ivy Bridge processors up to the new Core i7 quad-core processor. The S series has a docking station with extra storage and a sheet battery available as options. That gives the 15-inch model up to 12 hours of battery life and 14 hours for the 13-inch model. It has a backlit keyboard and an ambient light sensor that dims the display as needed based on the lighting in a room. One of the S series models comes in pink. It weighs around 3.7 pounds.

The Vaio Z series is a premium business laptop with a glossy carbon fiber case. It weighs just 2.6 pounds and has a full high-definition display. It comes with a third-generation Intel quad-core processor.

Meanwhile, the L series All-in-One computers have HD monitors with the computer built into them. They use the Sony Bravia Engine with the X-Reality chip for high-quality video. It has a 24-inch screen with a multi-touch interface. You can use the interface to browse the web, play Blu-ray movies, or access music and photos. It has a TV tuner with picture-in-picture capability. It uses Ivy Bridge processors, up to an i7 quad-core processor. The L series has multiple hard disk options and Nvidia graphics. A glasses-free 3D option will be ready in the late summer.The viewing angle is pretty wide for the screen.

One of the cool capabilities for the L series is gesture control. You can wave your hand to start music playback, sort of like Microsoft’s Kinect gesture-control system for the Xbox 360. You can use a wave of your hand to advance a slide in a Powerpoint presentation. The control technology taps the webcam to recognize gestures.

The new Vaios will be available at Sony retail stores and other retailers in June.

Pricing and availability is as follows:

L Series All-in-One
L Series will start at approximately $1299.99 in Black and White.

Check out our image gallery below.