Shawn Layden took over as president and CEO of Sony Computer Entertainment America seven months ago. Replacing longtime head Jack Tretton, Layden has been responsible for the sales of the PlayStation 4, which recently celebrated its one-year anniversary.

Sony said Friday that it has sold 13.5 million units of the PS4 in the past year, significantly more than the 10 million Xbox Ones claimed by Microsoft during the past year. Sony also released other interesting stats: PlayStation Plus, the subscription-based online program, now has 7.9 million paying members; Sony has more than 56 million unique active users; they’ve played a billion hours on the PS4 online; and they have pushed the Share button on the PS4 more than 530 million times.

These numbers suggest that the console war is Sony’s to lose at this point, and that it is faring much better than it did in the PlayStation 3 generation. Layden’s job is to keep it going. He met with us at Sony’s U.S. PlayStation headquarters on Friday for a wide-ranging interview on everything from price cuts to the upcoming PlayStation Experience fan event (where Sony plans new game announcements) and the controversy around #GamerGate, which has included a range of issues from sexual harassment to game journalism ethics. 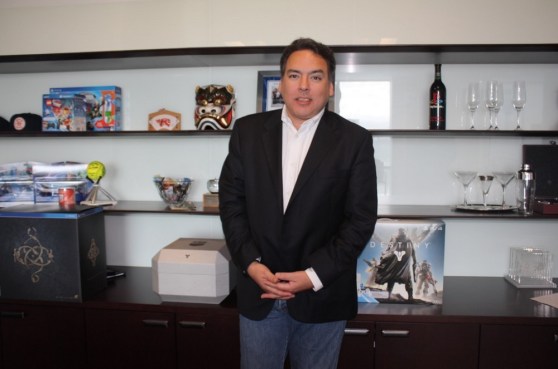 GamesBeat: Please tell us about your background at Sony.

Shawn Layden: I joined SCEA in April. What’s that, seven months now? I joined Sony in 1987, of course. I’ve been the Sony group for 27 years. I’ve been with PlayStation since 1996.

GamesBeat: What was the transfer into this job like?

Layden: As far as distance goes, it was cool. I was working in that building, because that building is the headquarters for Sony Network Entertainment. I came back from Tokyo to America about four years ago when we started that company here in the bay area. I joined as its COO. We pulled that together. It was crazy. The first day I started, we had 800 people as a startup company. That’s a different experience.

But then in April I was asked to take over the leadership role here at SCEA. That transition was just a walk across the park to come in here. Since I’ve been with the PlayStation group before, virtually everyone here is someone I’ve worked with before and known a long time. That transition was pretty smooth.

Layden: Sure. I’ve been working with Andy for more than 20 years. I’ve known Kaz my entire PlayStation career. We all grew up in the company at the same time. Kaz has gone on to great things, of course.

GamesBeat: You have this new data out today. That was interesting: the numbers on the year after PlayStation 4. 13.5 million sold and 530 million share button presses. Some of this data is pretty interesting. You haven’t released this kind of stuff before.

Layden: The share button press, people thought, “Wow, that’s pretty micro.” But it’s more an indication of a trend in what people are doing. That’s half a billion presses from people wanting to show their gameplay and share with their friends.

Making a physical button on the controller, as you can imagine, is not an easy decision to take at the time. Otherwise everyone would want a button on it to do something or other. But we felt sharing was the perfect thing to make physical on the controller. In that moment, you don’t want to start pulling down menus and finding out how to capture this or that. You just hit the button and pull it out. That was a definite win for us. 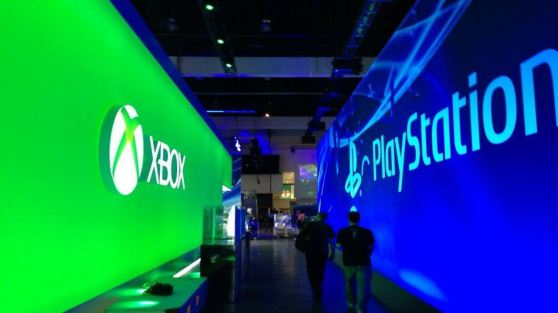 Above: Sony and Microsoft head-to-head at last year’s E3.

GamesBeat: Is there a way you could put the 56 million unique active users in context? Activision talks about having 40 million monthly active users for Call of Duty. In some ways that number will seem small compared to some other big properties out there.

Layden: We used to talk about PlayStation accounts, PlayStation Network. That number got north of 100 million very quickly. It’s much further now. But we felt that it wasn’t a meaningful metric. I have five PlayStation Network accounts myself. I’m not the average user, but a lot of people will have two or more accounts.

Our metric for active is that it has had activity on the network in the last 30 days. These aren’t sleeping accounts: someone making an account and then putting their Vita in a closet.

GamesBeat: The time associated with those players is probably something worth talking about as well. Other people who have that kind of number might have them for a lot less time.

Layden: Certainly. These people are spending hours on a regular basis across the service.

GamesBeat: What would you say you’re still working on? These are impressive numbers, but what do you really want to boost?

Layden: We’re working on everything. But we’re really happy with, in the PlayStation 4 era, the high percentage of network attachment we’re getting against the units. Some crazy number, like 95 percent of PlayStation 4s, has attached to the network. We could only dream of that with PlayStation 2 or PlayStation 3. Keeping that high attachment rate is something we’re pushing on. PlayStation Plus takeup has been very high with the advent of PlayStation 4. We want to continue to work on that to show value and benefit to our members who’ve joined that club, if you will.

Certainly the continued rollout of the platform—13.5 million is a pretty good achievement for us. As anyone else would say, the first 13.5 million is the easy 13.5 million. We need to continue to push that installed base. We’re in a strong position now. Black Friday is just around the corner. In my neighborhood we heard “Jingle Bells” in the department stores in September, but Black Friday is the real kickoff.

GamesBeat: Does it seem accurate to say that you have about a two-to-one advantage over Xbox One?

GamesBeat: I see the bags under your eyes. The sweat rolling down your face. [Author’s note: I was joking here] Do you feel pressure from the $50 price cut that Microsoft has made (Haha)?

Layden: That’s from too much celebrating.