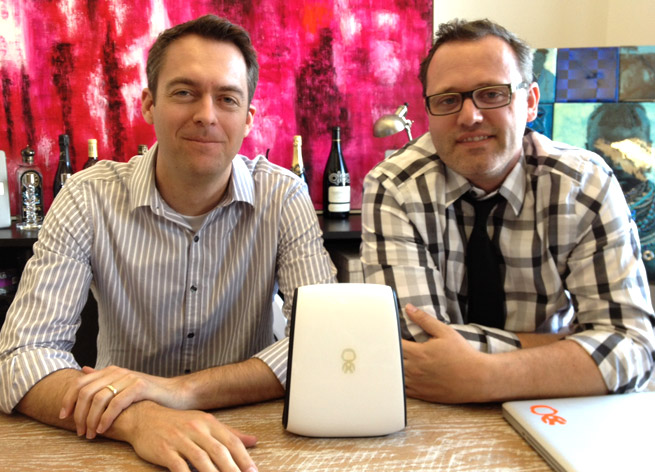 Consumers are hungry for cloud storage and backup services like Dropbox, Google Drive, and Microsoft SkyDrive. But if you’re trying to backup all of your movies and music in the cloud via these services, your bill can be pricey. 200GB of Dropbox storage, for example, runs $20 a month.

Enter Space Monkey, a young startup that wants to put a “mini data center” in your home that costs you $10 a month and gives you a massive 1TB of backup storage.

Salt Lake City-based Space Monkey debuted its product to the world a year ago at the Launch conference, but it has been hard at work getting things ready for today. Co-founders Alen Peacock and Clint Gordon-Carroll (pictured) were previously long-time employees of early cloud storage provider Mozy, so they know a lot about the challenges of maintaining data centers and delivering cloud storage.

“This was born out of seeing inefficiencies at Mozy,” Gordon-Carroll said. “Operating expenses are huge in the data center.”

Gordon-Carroll told me that the cost of maintaining data centers is simply too expensive, with extensive power consumption, cooling, and monitoring all causing headaches for the biggest and smallest companies. So they’ve designed their company to be based on people subscribing monthly or yearly for hardware and service that is more affordable and of a higher capacity than most other cloud services. At one point in a conversation with Gordon-Carroll, he described the service as “anti-cloud.”

Space Monkey’s setup is so different from Dropbox and other traditional cloud storage providers because it uses all the devices in people’s homes to create a powerful backup network rather than using data centers. With enough Space Monkey devices placed around the company, the users’ devices become the data center. The network also allows your files to be accessed from virtually anywhere, including web, Windows, Mac, Linux, iPhone, and Android apps.

The only downside to the product is that because these devices are talking to each other all the time and distributing data between them, users will see some extra bandwidth allocated towards their Space Monkey devices.

The 12-employee company has raised $2.25 million to date from investors including Google Ventures and Polaris Partners. That said, building hardware is an expensive endeavor, one that would require more funding.

Instead of seeking more cash, the Space Monkey team is instead looking to fund the project and building of units via Kickstarter. The campaign starts today and the team has set a goal of raising $100,000 in 30 days. Early-bird backers are able to sign up for a device and one year of service for $99, and anyone who gets in later can get the device and a year of service for $119.

Check out the video below for more about Space Monkey: