Six weeks ago, I wrote about skyrocketing VC funding in space tech companies. But according to brand new data from CB Insights, 2016 has actually seen a drop in investments following the 2015 surge I outlined.

Moreover, some areas that VCs considered highly promising a year or two ago are now considered overhyped (for example, smallsat launchers and earth observation microsatellites). 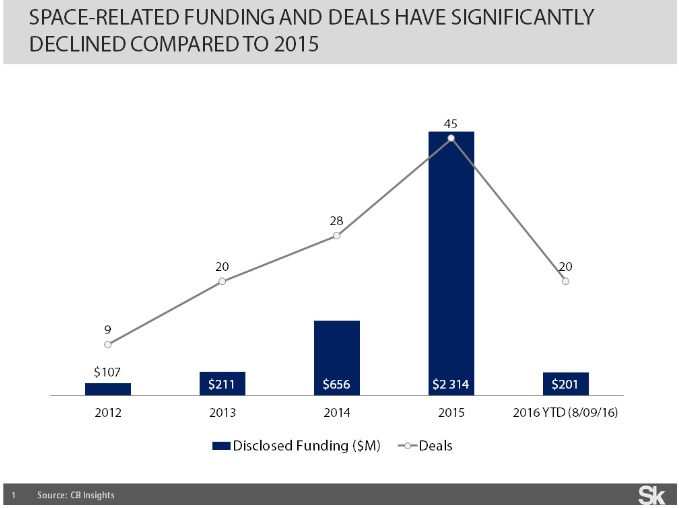 However, despite the drop in funding, there are some areas of space tech that remain promising and that have remained largely under investors’ radars so far.

Historically, advances in materials and manufacturing were critical to enabling space exploration. For instance, a number of discoveries in thermal coating materials in the 1950s made it possible to design reentry vehicles and enabled manned spaceflight in 1961 by Yuri Gagarin.

We may see something similar play out again really soon in the current space industry. Lux Capital partner Shahin Farshchi, an investor in hot space tech startups Planet and Orbital Insight, told me: “In the near term, I expect the adoption of existing metal alloy printing methods to improve the economics of traditional space businesses. In the long term, I expect metal alloy printing processes to get faster, cheaper, and combined with robotics and automation. These capabilities will make the benefits of space accessible to everyone as we have previously witnessed in semiconductors and electronics.”

One example of this is New Zealand-based startup Rocket Lab, which is working on a launch vehicle for small satellites. The company has developed a first of its kind 3D-printed rocket engine that is cheaper and lighter than anything comparable.

In the slightly longer term, there are some truly science-fictional technologies being made possible. A vast amount of the mass of any spacecraft is dedicated to hauling the fuel it needs to escape the Earth’s gravitational pull. If sea vessels are built at port, then why shouldn’t spacecraft be manufactured and fueled in orbit?

As Farshchi said, “We’re expecting additive manufacturing systems to be small, flexible, and durable enough to operate in space. Combined with robotic mining for water and minterals on the moon and asteroids, spacecraft can be built and gassed up in orbit!”

Speaking of asteroid and moon mining technologies, companies that could detect useful recources via remote sensing methods would do very well. “Companies like Planetary Resources who aim to source fuel and building materials from asteroids would enable much more possibilities for in-space manufacturing,” Joe Landon, chairman of Space Angels Network, told me.

Sunil Nagaraj, VP at Bessemer Venture Partners, an investor in Spire and Rocket Lab, is also very positive on these “long-term” space technologies: “The upcoming smallsat imaging constellations and launch vehicles are just the beginning. From there, I believe we’ll see microgravity production, in-space manufacturing, and other segments become more viable.”

Companies working to enable that kind of in-space manufacturing include Made In Space and SpacePharma (more details here).

Since the Earth observation microsatellite field is mostly overdone and investors are not buying into the idea of launching large satellite constellations, startups are moving further downstream and trying to “generate signals, not just pixels,” as Farshchi puts it.

Combining this market pull with one of the biggest technology trends at the moment — artificial intelligence — startups like Orbital Insight and Descartes Labs are applying object recognition algorithms and data science to satellite imagery.

However, these companies will need to integrate their products into customers’ decision making processes. Farshchi points out: “The fancy images from space enthrall customers in agriculture, insurance, finance, marketing, and mapping; however, those mesmerizing photos need to feed signals [into] those customers’ existing tools and workflows. Founders must walk their customers through the various use cases and make the concrete case as to how the space-based technology will help them make better decisions and boost their bottom lines.”

Nevertheless, these “AI + satellite imagery” companies have truly global potential and can change the way we measure global-scale processes, which is a huge opportunity across a variety of markets.

While investors are pretty familiar with Earth observation (EO) microsatellites and the amount of EO data is growing exponentially as hundreds of EO satellites are launched every year, there is a bottleneck in how this imagery is sent back to Earth. Ground station networks that receive satellite data are geographically scattered (sometimes a satellite has to wait an extra orbit before sending the data, which causes time losses) and run by slow-moving incumbents, making these networks unsuitable for a new breed of space startups launching 100+ satellite constellations.

So there are companies (RBC Signals and Atlas Space Operations to name just a couple) that are applying software business models and a Silicon Valley mentality to this problem: They merge existing ground station infrastructure with a revenue-share approach (no CAPEX) and take advantage of unused capacity, commercializing it via subscription-based models.

Such global ground station networks would enable real-time access to satellite imagery that would significantly increase the value of both EO data and services/products on top of this data.

As Michael Dempsey of Frontier Tech investor puts it: “There is an increasing need [for] real-time data from space, whether for humanitarian or capitalistic use-cases, and thus companies that are working so that startups don’t have to build massive ground infrastructure (to acheive this real-time access to data) are definitely very promising.”

However, ground stations aren’t the end-all answer to the problem of real-time access to space data. Space Angels Network’s Landon points out that “The problem of getting data from space to customers won’t be solved by more ground stations alone. I expect to see in-space data relays to take more of the burden of downlinking data from already highly constrained remote sensing satellites.”

An interesting example of a company tackling this challenge is Audacy, which is developing a space-based relay system that provides continuous connectivity for spacecraft and launch operators.

Summing up, despite the significant drop this year in VC investments in space tech, I and my colleagues at Skolkovo Foundation remain positive on space-realted startups, and there are still some very interesting opportunities. So stay tuned!