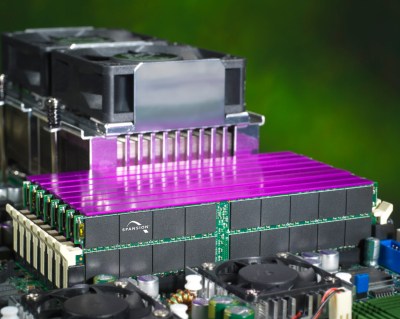 Spansion is announcing today that its EcoRAM flash memory can speed up the performance of some server applications by 50 to 100 times compared to traditional memory chips. It will be interesting to see if this innovation can help pull Spansion out of bankruptcy proceedings.

EcoRAM, developed by startup Virident and built by Spansion, uses flash memory chips to replace dynamic random access memory and hard disks in data center servers. Server vendors have put EcoRAM through testing and have come up with results for read-intensive workloads. That means server operations where data is fed to someone, like when a server sends a web page to someone’s home computer.

EcoRAM can fetch data in hundreds of nanoseconds, while hard drives are 10,000 times slower and standard flash memory is 100 times slower.

With EcoRAM, the amount of system memory available is eight to 16 times more than the capacity of typical Intel-based servers. EcoRAM can dispense with the need to continually shuffle data back and forth between hard disk drives (which store data permanently) and DRAM chips (which store data at any given moment).

Virident Systems, based in Milpitas, Calif., is building GreenCloud servers using the Spansion EcoRAM memory chips. Virident reported that its servers can run MySQL, a popular open-source database, as much as 50 times faster than a system with DRAM and hard drives. Other operations known as database caching, where data is stored temporarily in a distributed fashion, cost 50 – 70 percent less with EcoRAM and can have access to eight times more memory capacity.

Sunnyvale, Calif.-based Spansion, which filed for bankruptcy protection in March, has begun selling EcoRAM in configurations as high as 512 gigabytes per server. Virident and Appro are offering servers with EcoRAM now. Target applications are read-intensive areas such as data analytics, bioninformatics, business intelligence, government, Internet web page serving, and oil and gas exploration.

One customer is the Stanford Exploration Project, which is trying to create a visual representation of the earth for oil and gas exploration. The project says the EcoRAM solution delivers eight times the typical memory capacity per server and overall performance is 60 times faster.

Robert Clapp, senior research engineer of geophysics at Stanford University, says some tasks can be done in 22 minutes instead of 22 hours. Rivals include Schooner Information Technology, which launched its products last week.