(Editor’s note: Serial entrepreneur Steve Blank is the author of Four Steps to the Epiphany. This column originally appeared on his blog.)

I was catching up over breakfast with a friend who’s now CEO of his own startup. One of the things he mentioned was that when it came to decision-making he still tended to think and act like an engineer. Each and every decision he made was carefully thought through and weighed. And he recognized it was making his startup feel and act like a big ponderous company. 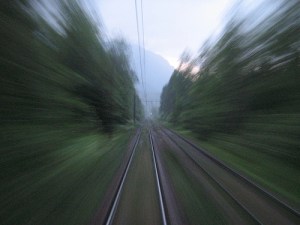 General George Patton once said, “A good plan violently executed now is better than a perfect plan next week.” The same is true in start-ups.

Most decisions entrepreneurs handle must be made in the face of uncertainty. Since every situation is unique, there is no perfect solution to any engineering, customer or competitor problem – and you shouldn’t agonize over trying to find one.

This doesn’t mean gambling the company’s fortunes on a whim. It means adopting plans with an acceptable degree of risk, and doing it quickly. (Make sure these are fact-based, not faith-based decisions.) In general, the company that consistently makes and implements decisions rapidly gains a tremendous, often decisive, competitive advantage.

The heuristic I gave my friend was to think of decisions of having two states: those that are reversible and those that are irreversible. An example of a reversible decision could be adding a product feature, a new algorithm in the code, targeting a specific set of customers, etc. If the decision was a bad call you can unwind it in a reasonable period of time.

An irreversible decision is firing an employee, launching your product, a five-year lease for an expensive new building, etc. These are usually difficult or impossible to alter.

My advice was to start a policy of making reversible decisions before anyone left his office or before a meeting ended. In a startup, it doesn’t matter if you’re 100 percent right 100 percent of the time. What matters is having forward momentum and a tight fact-based feedback loop (i.e. Customer Development) to help you quickly recognize and reverse any incorrect decisions.

That’s why startups are agile. By the time a big company gets the committee to organize the subcommittee to pick a meeting date, your startup could have made 20 decisions, reversed five of them and implemented the fifteen that worked.

Once you learn how to make decisions quickly, you’re not done.  Startups that are agile have mastered one other trick – and that’s Tempo – the ability to make quick decisions consistently over extended periods of time.  Not just for the CEO or the exec staff, but for the entire company.  For a startup Speed and Tempo need to be an integral part of your corporate DNA.

Great startups have a tempo of 10x a large company.