True wireless charging at a distance has arrived — you just can’t buy it yet. But companies like Ossia are making progress, buoyed by manufacturers and enterprises. In September 2018, the Bellevue, Washington startup announced it would team up with Walmart to help the retailer cut costs in its thousands of stores, Ossia’s fourth such partnership last year. And today at CES 2019 in Las Vegas, it revealed a collaboration with phone accessory maker Spigen to develop a wirelessly charging smartphone case.

A phone accessory has always been in the cards, Mario Obeidat, Ossia’s CEO, told VentureBeat in an interview, but it wasn’t until recently that the firm perfected a receiver capable of squeezing into slimmer, narrower form factors like cases.

“The idea is that consumers in an office or in a conference room will be able to set their phones down for one, two, or three hours, and when they pick them up again, they’ll be fully charged,” he said. “Our goal from the beginning is that every smartphone will be wireless power.” 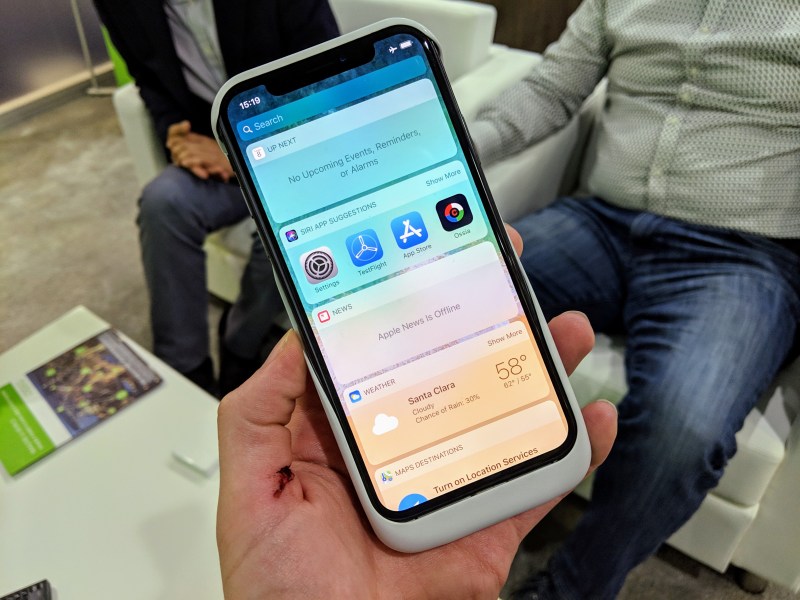 If you aren’t familiar with Ossia’s Cota platform, here’s a quick primer: Unlike most “wireless” charging tech on the market, Cota doesn’t require line-of-sight access, plugs, or charging pads. Instead, it uses thousands of antennas embedded in transmitters that communicate with compatible transceivers. When a device starts running low on power, those antennas emit microseconds-long beacon signals that reflect off of walls, furniture, and other obstacles until they reach a transmitter, which triangulates the beams to pinpoint the transceiver’s location and sends power along those paths.

Cota’s first-generation transmitter could send about 1 watt to a smartphone sitting 3 to 6 feet away, while its Cota Tile product could charge devices up to 30 feet away (or 50 feet, with two transmitters working in tandem). Cota 5.8GHz, which it announced at CES 2019, is much improved; it’s able to deliver roughly four times greater power with a same-sized transmitter and receiver antenna. And because it operates in the 5.8GHz spectrum, as the name implies, it’s less susceptible to interference from surrounding wireless signals.

The collab between Ossia and Spigen is in its infancy — Spigen didn’t have a mockup or prototype on hand — but when the Cota-compatible case does see the light of day, it’ll probably look something like Ossia’s proof-of-concept Forever Sleeve, which was announced late last year. It packs a battery that receives power from a nearby Cota transmitter, which in turn recharges a plugged-in smartphone. 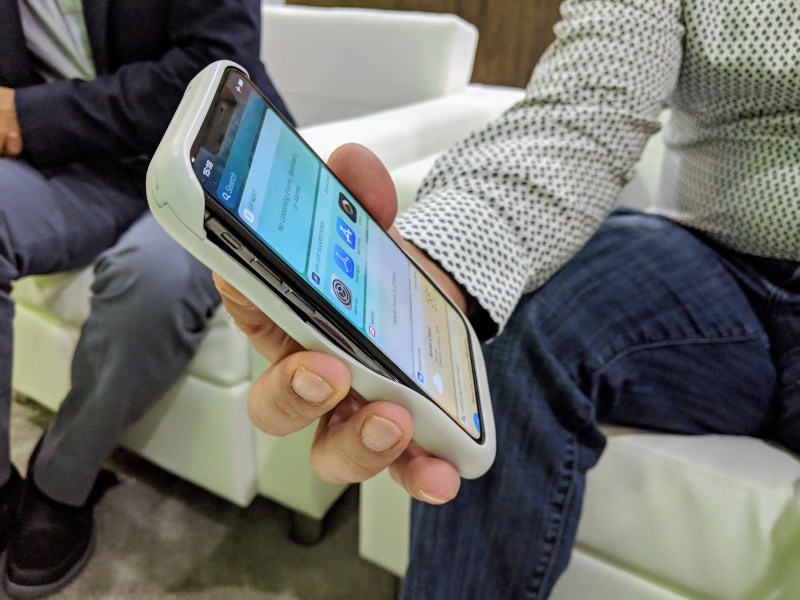 Spigen CEO Daeyoung Kim, who spoke to VentureBeat through a translator, said that a price point hadn’t been decided upon yet, but that it would be “sensible.” And he said that it would support Apple’s iPhone first.

Ossia has raised more than $35 million to date, but it’s got plenty of competition. Powercast, a startup founded in 2003, has an at-a-distance wireless power system that’s available in the form of a development kit. And Energous is commercializing transmitters that can send power through the air to devices up to 15 feet away.

Ossia is no newcomer to at-a-distance charging, though. Roughly a decade ago, Ossia developed its first wire-free, over-the-air transceiver that could beam electricity to devices anywhere within range. In the years that followed, it’s referenced kits including a wirelessly powered AA battery replacement (the Forever Battery), licensed designs to antenna companies, built out a cloud-hosted management platform, and recruited ecosystem partners like Displaydata, Molex, and Motherson.