Just weeks after Sports Illustrated partnered with GameOn to make a bot for the final days of the Rio 2016 Olympic Games, SI announced the launch of new bots to help NFL fans stay up to date, follow their favorite teams, and, oh yes, talk trash to friends and family.

The Sports Illustrated NFL bot by GameOn is now live on Telegram, Slack, Facebook Messenger, and Skype. A Kik bot and iMessage app are also in the works, said CEO Alex Beckman. 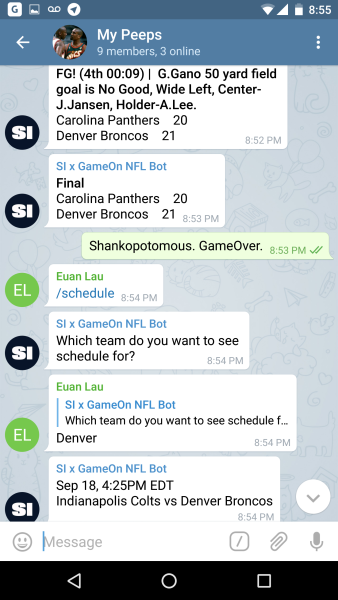 SI bots will send daily updates twice a day with top news from favorite teams. The bot also shares team schedules, live scores, and stats on demand, and it can tell you what games are happening right now.

Unlike the Olympics bot that shared no rich media, in part due to strict licensing, the NFL bot will have video highlights, images, GIFs, and other media directly inside the chat window.

This is the beginning of a larger strategy that will eventually let fans follow their favorite athletes — so that you get a push notification every time Serena Williams does something awesome — or let fantasy football fanatics create alerts for their fantasy team.

“It would be very safe to say that over the next six months we can expect to see more sports start to make their way into this bot infrastructure — and features like the ability to follow players, in addition to teams or hot trending topics, like free agency or draft coverage etc,” Beckman told VentureBeat in a phone interview. “Basically, if it’s in the first 25 minutes of ESPN, you’ll be able to follow that story in GameOn and in our bots.”

One of the most exciting parts of the Olympic bot was how well it worked in groups. In fact, adoption and interaction were highest among groups, Beckman said: “Of the 500 Skype users that added in the first hour, over 90 percent had multiple teams…so there was a vitality coefficient that was very exciting.”

In a group setting, quick media-rich updates from the bot help you talk trash to friends, Beckman said, adding that it was something he experienced during the Broncos-Panthers game earlier this week. The best part? “It not only gave me information I needed to talk trash, I was able to do it all inside of the bot.”

He explained that the reason he started the company is because “Typically, in the past, I’d get a push notification from ESPN or some app, then I’d go to Twitter or Facebook; I’d be going from app to app trying to find where my friends are that are watching the game.” With the bot, the experience is seamless: “There is a big difference between reading and typing where everyone is in the same window versus having to go and find different apps,” he concluded.