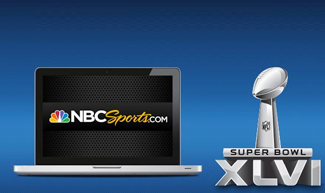 Updated: Official statement from the U.S. Immigration and Customs office has been added at the bottom of the post.

The U.S. Department of Justice has issued a new round of domain seizures today targeted at websites that provide access to illegal live sports streaming video.

The DOJ’s timing is likely related to this Sunday’s NFL Super Bowl championship football game, which has routinely become the most watched televised event of the year with over 100 million viewers. In December, television affiliate NBC and the NFL announced that the big game would stream for free online for the first time — meaning illegal sports streaming sites could hypothetically steal traffic away from NBC.

The seized domains, which aren’t limited to any particular sport, include Firstrowsports.tv, Firstrowsports.com, and Soccertvlive.net. However, more sites may be added over the course of the day. Visitors who navigate to any of the seized sites are met with the official takedown notice from the DOJ. The Justice Department has yet to issue a formal statement regarding the Super Bowl Sting operation.

This isn’t the first time the DOJ has seized domains on the basis of copyright violations. In November, the Justice Department shut down over 130 domains that were involved with streaming content illegally. Yet, this is the first time the government has managed to seize domains that feature the .tv extension. As TorrentFreak points out, the .tv extension belongs to the islands of Tuvalu, but it’s operated by U.S. security company Verisign. So apparently, the federal government has assumed the authority to not only shut down domains with extensions intended for the U.S. but also any domain extension that’s operated by a company within the U.S.

While I can appreciate the Justice Department’s desire to thwart websites that are making money illegally off of U.S. sports, I’m not sure this particular round of domain seizures will have any meaningful impact. First of all, NBC is streaming the Super Bowl live on its website for free, which easily makes it the most visible venue. Also, NBC is offering an experience that’s actually better than its television broadcast — by offering game highlights, multiple video angles, and more. None of the illegally streaming sites can compete with that.

It’s also worth mentioning that the head of digital for NBC Sports, Rick Cordella, has publicly commented that NBC isn’t worried that live streaming the Super Bowl will take viewership away from people who watch it on TV. So basically, streaming the game (anywhere) won’t even affect the regular business it’ll generate for the NFL and NBC.

We’ve contacted the DOJ about the domain seizures and will update this post with any new information.

Updated (2:13 p.m. PT): Below is the official statement from the U.S. Immigration and Customs office regarding “Operation Fake Sweep” — the oh so clever name given to the DOJ/ICE domain seizure initiative, which commenced Oct. 1, 2011 and will continue through Super Bowl weekend.

The website seizures during Operation Fake Sweep represent the 10th phase of Operation In Our Sites, a sustained law enforcement initiative targeting counterfeiting and piracy on the Internet. The 307 websites are in the process of being seized by law enforcement, and will soon be in the custody of the federal government. Visitors to these websites will then find a seizure banner that notifies them that the domain name has been seized by federal authorities and educates them that willful copyright infringement is a federal crime.

American business is threatened by those who pirate copyrighted material and produce counterfeit trademarked goods. Criminals are attempting to steal American ideas and products and sell them over the Internet, in flea markets, in legitimate retail outlets and elsewhere. Intellectual property (IP) thieves undermine the U.S. economy and jeopardize public safety. American jobs are being lost, American innovation is being diluted and organized criminal enterprises are profiting from their increasing involvement in IP theft.

Since the launch of Operation In Our Sites in June 2010, the HSI-led National Intellectual Property Rights Coordination Center (IPR Center) has seized a total of 669 domain names.