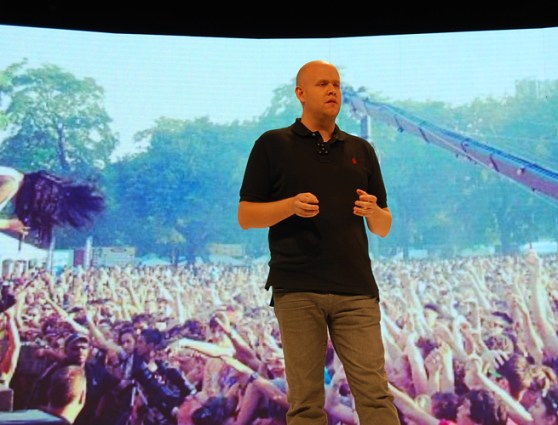 NEW YORK CITY — Popular streaming music service Spotify announced that it has reached the 5 million paid subscriber milestone, with 1 million paid users in the U.S., the company said today at a private event. It also said a web-based player would arrive early next year.

Spotify pulled out all the stops to celebrate its progress at a classy event at New York’s Cedar Lake Contemporary Ballet on the west side of Manhattan. On top of a smoke machine, the company had nine different large screens flashing different images of musicians and concerts.

“We’re punks because we’re restless and we tell it like it really is,” Spotify founder and CEO Daniel Ek said on stage. Ek said unlike other disruptors, Ek said he didn’t want to “kill” what came before, but to reshape it for the better, speaking of the music industry.

Ek said Spotify has 20 million total active users and more than 1 billion playlists. The one million paid users in the U.S. matches Rhapsody’s subscriber count. With the subscriber numbers in mind, Ek said if Spotify was not the largest, it was at least the fastest growing music service in the U.S.

On the contentious topic of royalty payments, Ek said Spotify has paid out “half a billion dollars in royalties” to artists and labels. 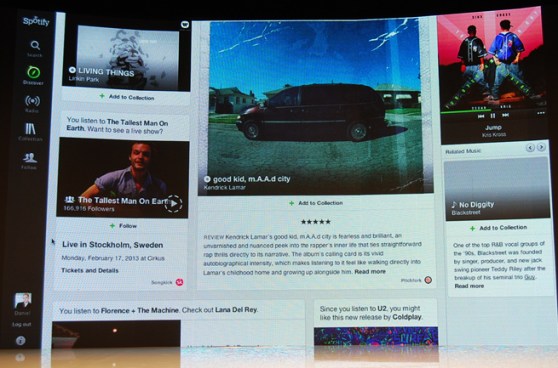 Ek also used the event to show off the features of the new Spotify web-based player. The player lets you browse through similar artists to one you like all on the same page. You can click the image of different artists and songs will start playing. Ek said the player’s” Discover” page is personalized so everyone’s page looks different and recommends different artists to check out. “If you really like metal, you’ll have a metal page,” Ek said.

The new web player will also include the ability to “follow” influential people, which will also help with discoverability. Ek followed Pres. Barack Obama’s account on stage as an example.

He also followed Bruno Mars as an example of following an artist’s music picks. This way you can listen to what your favorite artist is listening to while he or she is writing a new record, Ek said. Other people you can follow, for example, include Justin Bieber and Paul McCartney.

The event was capped with a performance by Grammy-nominated artist Frank Ocean. He performed the song “Pyramids.”