Spotify may be one of the leading music-streaming services for consumers, but it has also been setting out its stall to infiltrate the business realm.

Soundtrack Your Brand — founded out of Sweden in 2013 by Andreas Liffgarden, former global head of business development at Spotify, and Ola Sars, who lays claim to being one of the very early cofounders of Beats Music — has received around $20 million in funding to date. It has the backing of Spotify itself, alongside TeliaSonera, Wellington Partners, Northzone, and Creandum.

In a nutshell, Soundtrack Your Brand offers two core products, Spotify Business and Spotify Enterprise, which are basically B2B versions of the streaming service that offer additional features — such as the ability to manage playlists in multiple locations from a central hub. This means managers can control the sounds playing in different locations from anywhere. If you’ve never heard of Soundtrack Your Band before, it’s because it has only been available in the Nordics, where it claims big-name clients including Nike, Tag Heuer, and Starbucks.

Today, however, Soundtrack Your Brand is opening for business in the U.S. for the first time, with a rollout that could prove pivotal to the product’s growth. The U.S. launch (and any subsequent new market launches) will be slightly different than that of the Nordics, insofar as the product itself won’t be called “Spotify Business” — it will be called Soundtrack Business. For launch, Soundtrack Business will be available on Windows (PCs and point-of-sale systems) and iOS. 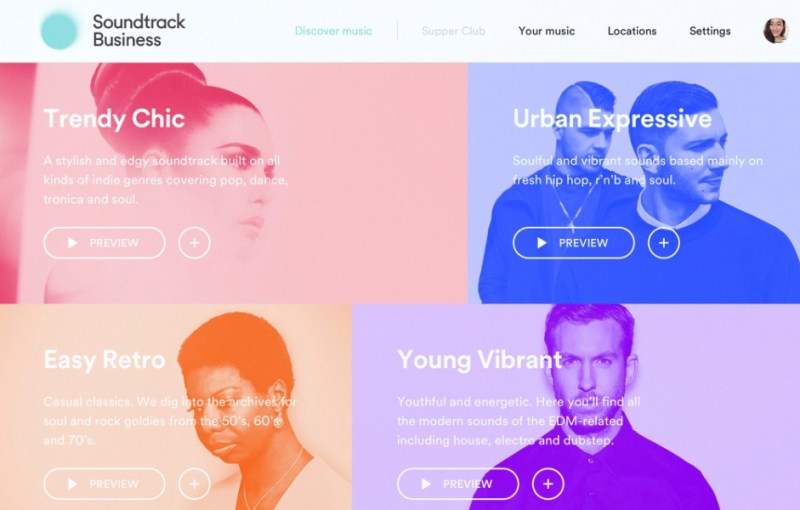 While Spotify has provided licensing for Soundtrack Your Brand to operate, moving forward the startup will use “multiple licensing solutions” under its brand, meaning that it won’t necessarily be limited to Spotify, though the company hasn’t elaborated on what additional services will be available. It won’t be services that directly compete with Spotify, however — so we’re talking white-label platforms such as 7Digital, MediaNet, or Omnifone.

“Our success in Scandinavia is a testament to the product we’re building and illustrates the growing importance of real-time technology in physical commercial environments,” said Sars, CEO of Soundtrack Your Brand. “Today’s launch represents a huge milestone for our company as we extend our services to businesses across the United States and globally.”

It has long been known that background music influences consumer behavior, and this is why Spotify and the Soundtrack Your Brand offshoot are aiming for what is a potentially lucrative market. While consumers have embraced the streaming revolution, many businesses still use “antiquated” technology — two-thirds of businesses still use CDs, according to Soundtrack Your Brand. But streaming opens the doors to more personalized and adaptive in-store music, with algorithms helping humans decide what to play; this could be influenced by time of day, environment, and location, among other shifting trends. It’s also worth noting here that Spotify itself is only available in noncommercial environments (read the T&Cs), so any business using Spotify to broadcast to their customers is being naughty.

For the U.S. launch, Soundtrack Your Brand has good company in the form of McDonald’s, which has given the Swedish company a “global framework agreement” that opens the door for the business to reach fast food franchisees (and fully owned McDonald’s restaurants) globally on preapproved terms. This doesn’t mean that McDonald’s in the U.S. will sign up, but the contract that’s in place smoothes the path and makes it easier. It’s similar to what’s already in place in Sweden, where the company claims more than 60 percent of McDonald’s now use its service.

The fact that the new McDonald’s deal is global, rather than restricted to Sweden, also hints that Soundtrack Your Brand will be launching more widely soon. We’re told that the company is already in discussions with McDonald’s franchisees in “major markets on several continents” and is running pilots elsewhere. In short, Spotify could soon be powering retail outlets globally, and its deal with McDonald’s makes it easy to scale.

This leaves me with one lingering question: Why doesn’t Spotify itself simply offer a business product, given it quite clearly holds lucrative potential? Well, it seems to all come down to priorities. If Spotify is to win the consumer market, it has to be laser-focused on that — the B2B realm comes with its own complications and licensing restrictions. So by investing in Soundtrack Your Brand, Spotify is acknowledging it knows where it needs to have a presence, and it’s a business that is on the verge of scaling big-time.

Another facet of the business that’s particularly interesting is the history of Sars’ involvement with Beats Music. While Dr. Dre and Jimmy Iovine are the main names generally credited with the Beats brand (now owned by Apple), Sars says his cofounder status in Beats Music stems from when he created indie music-streaming service Let’s Mix in 2010, which he says later became Beats Music. He says he served as chief operating officer at Beats Music until the end of 2012, gave up all rights to the brand, and then came up with a plan to target streaming services at businesses instead.

“We’ve spent the past two years building the best music streaming service for businesses bar none, and I’m intent on building a world-leading company,” Sars told VentureBeat. “Now, this is the year when we are taking our product internationally and scaling on a global level. In a year from now you will see us across all the continents in the world, bringing the best music to the most progressive brands and companies out there.”

The product’s U.S. expansion will be led by the managing director of North America, Jody McKinley, and the vice president of sales for North America, Brian Hirsh, who will lead the team’s growth with new offices in Seattle.