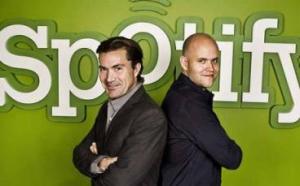 Silicon Valley’s top venture capitalists are reportedly making a big bet on streaming music service Spotify. There have been reports for months that Spotify was raising a big round of funding, and now it has closed a $100 million round, according to a report in AllThingsD, which GigaOm says it has independently confirmed.

The reported funding values Spotify at $1 billion. It comes from DST (the Russian firm that has made growth investments in most of the big consumer names in the startup world, including Facebook and Zynga), as well as top-tier venture firms Kleiner Perkisn Caufield & Byers and Accel Partners.

The big story with the Spotify has been its long-promised, long-delayed launch in the United States. (It’s already available in Europe.) Reports have been leaking out about Spotify setting the stage for a US launch by sealing deals with the major music labels, and Spotify’s general manager recently hinted that the launch may come in July.

Previous investors include The Founders Fund and Li Ka-Shing. Founders Fund partner Sean Parker, who was a co-founder at Napster, has called Spotify the company that will finish the job that Napster started.