Spotify is launching a new feature for iOS called Touch Preview, which makes it a lot easier to check out new songs on mobile.

Designed during a Spotify hack week, Touch Preview lets users press on a song title to hear a sample of a song. Rather than previewing the beginning of a song, Touch Preview plays a selection from somewhere in the middle of the track — an area Spotify product manager Miles Lennon calls “the meat of the song.” Jumping in at the chorus makes it easier to figure out whether you like a song, meaning you can more quickly move onto something else if you’re not feeling the groove.

The new tool works whether you’re searching by artist, album, or even in a playlist. Plus, you can sample songs while you’re listening to something else. When you hold down the song title, the music you were listening to will automatically pause and the song you’re previewing will kick in. When you lift your finger from the song title, the music you had on before the song you previewed will pick back up from where it left off.

Spotify also gives users a way to save previewed songs or add them to a queue. Swipe left on a song title to put it to your current playlist or swipe right to save it for future reference. 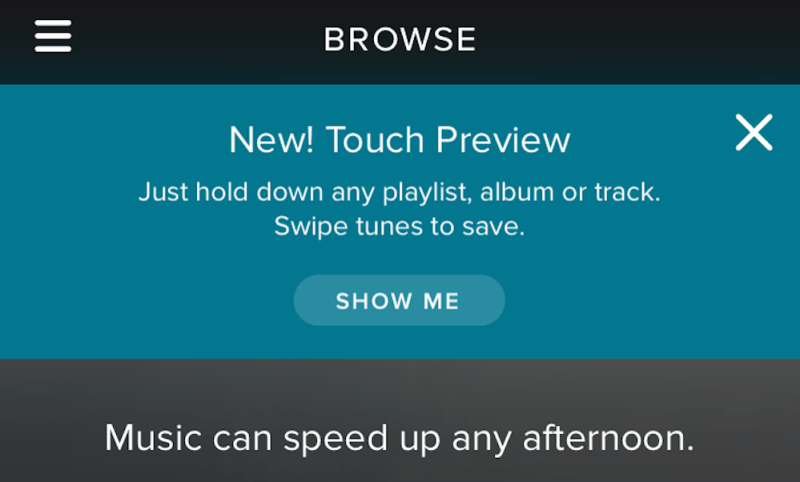 Touch Preview will be available to all users — not just paid subscribers. Lennon says that’s because this tool is all about getting users to be more active on the app throughout the day.

“People who stay with Spotify the longest build up a collection that they love. Frictionless discovery leads to more collection building,” says Lennon.

Last week the company revealed that it has 60 million monthly active users, only 25 percent of which are paying for the premium service. While Touch Preview itself might not be the catalyst for converting free users to paid subscribers, it could help drive engagement.

Touch Preview is only coming to iOS today, but Android users need not despair. The new features will be rolling out to them in the coming weeks. In the meantime, check out a video of the new feature here.