Spotify announced its Q1 2020 financial and user metrics today. While the company’s quarterly numbers looked healthy, for the most part, listening habits have evolved during the COVID-19 crisis. Specifically, games console and connected device consumption is up and morning listening routines have transformed as millions of people hunker down behind closed doors. As Spotify put it, “every day now looks like the weekend.”

The company revealed that it grew its total monthly active users (MAUs) to 286 million — up 31% and 5% on the previous year and quarter, respectively. Paid premium subscribers hit 130 million, a year-on-year (YoY) increase of 31% and quarter-on-quarter (QoQ) increase of 5%, meaning the company has maintained its roughly 45% ratio of paid to ad-supported users. 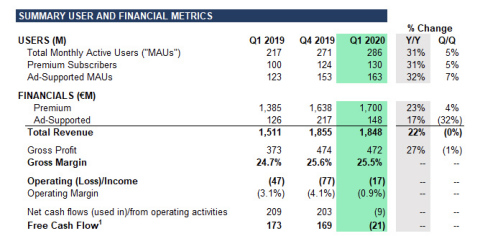 In some of its markets worst hit by the pandemic, including Italy and Spain, Spotify said overall daily active users and consumption declined — however, the company said listening habits have started to bounce back, while “consumption has meaningfully recovered” in many markets.

Moreover, where consumption was declining, it might seem reasonable to assume MAUs and paid subscribers would decline too, but the opposite was true. “Both new and reactivated MAUs grew substantially, even during lockdown periods in major markets,” the company wrote in its earnings report.

While there were no major surprises in Spotify’s Q1 2020 financials, with users and subscribers sitting roughly in line with forecasts, digging down into the numbers reveals some interesting trends. For example, listening via wearables, cars, and web-based platforms dropped by “double digits” in some cases, while consumption through TV and games consoles grew by more than 50% over the same period. For ad-supported “free” users in the U.S. specifically, Spotify said games consoles represented a “top 2 or 3” platform for consumption for the past month. More generally, connected device usage grew by more than 40% among ad-supported users in all Spotify markets.

This is what Spotify means when it says “every day now looks like the weekend”: Instead of commuting to work, people are sitting at home in their bedrooms and living rooms due to lockdown. Spotify said this trend was more pronounced in podcasts than music, which the company attributes to “car and commute” habits that have changed significantly over the past two months. The company said that 19% of its monthly users now “engage with podcast content,” up from 16% in the previous quarter. Separately, Spotify said it has seen a spike in podcast consumption related to meditation and well-being, while searches for relaxing music — covering “chill” and “instrumental” — have also increased.

Elsewhere in the digital media realm, Netflix more than doubled its own Q1 2020 subscriber expectations, gaining 15.8 million new paying customers compared to the 7 million it had projected.