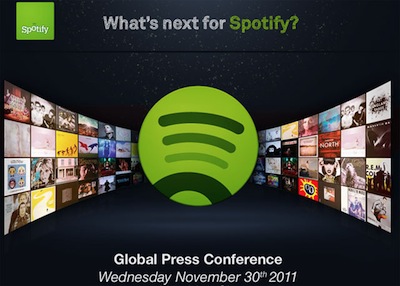 Spotify is sending out press invitations for a November 30 event in New York, where it will announce a new direction for the streaming music startup, the company has indicated.

The streaming music company is obviously staying vague about what it’s planning to say at the event and have given us very few details. What we do know is that it’ll have global implications and feature Spotify CEO Daniel Ek along with some “special guests”.

I may be reading into this too much, but “new direction for the company” would pretty much rule out things like additional social features for its streaming service (like the ability to search for playlists). Spotify may announce this feature, but it’s hardly a new direction for the company — especially since the company already forged a major partnership with Facebook, and is at its core a socially driven music streaming service.

It’s also unlikely that the announcement will simply be that Spotify is finally getting a dedicated iPad application. Previously, Spotify has announced support for a handful of new platforms, such as Boxee and BlackBerry. While an iPad app would be a bigger deal, it’s doubtful the company would hold a press conference to announce it.

My guess is the announcement will have something to do with a Spotify MP3 store launching in the near future, with plenty of integration with Facebook (including Facebook Credits). The special guests could turn out to be high profile music artists who have agreed to release exclusive tracks through Spotify and Facebook. It’s worth noting that 200 independent music labels terminated their streaming agreement with Spotify because it allegedly started hurting sales. A new store would be a good first step in turning that trend around.

The move would put Spotify into direct competition with Apple’s iTunes and new kid on the block Google, which recently announced a streaming music service (cleverly named Google Music) with its own MP3 music store.