Spotify saw strong growth in both paid subscribers and monthly active users during the second quarter, but a 13% increase in revenue fell short of Wall Street’s expectations.

In its latest earnings report, the company said it had 138 million paid subscribers, up from 130 million in Q1 and 108 million in Q2 2019. That 13% subscriber increase year-over-year topped analysts’ expectations of 136.4 million. The company also said MAUs rose 29% to 299 million, which beat estimates of 298.3 million. 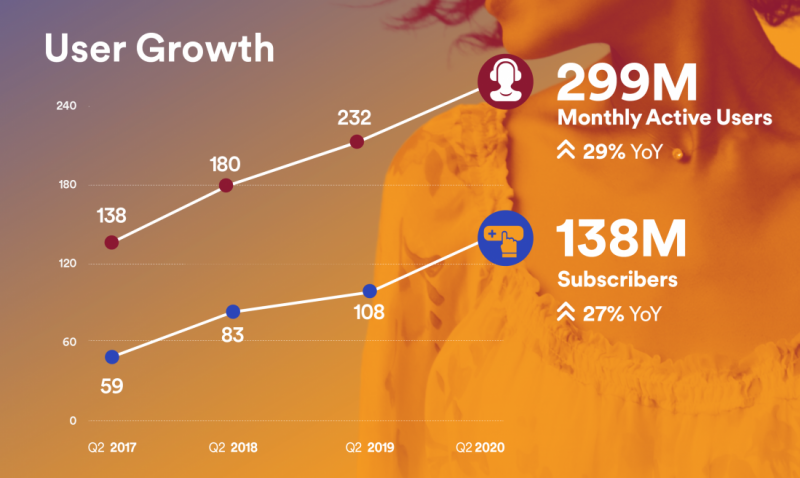 As a result, Spotify reported revenue of $2.22 billion for the quarter, up 2% from Q1 and 13% from one year ago. That was slightly below analysts’ expectations of $2.26 billion.

The biggest concern seemed to be the increase in Spotify’s loss to $418.4 million, up from an $89.2 million loss in the same quarter one year ago.

The company noted that it “recognized a reduction to revenue of €14 million ($16.42 million) due to a change in prior-period estimates that accounted for an additional 1% headwind.” (It did not offer additional details.) In addition, ad revenue dropped 21% from the same period last year, something the company attributed to COVID-19.

Prior to the pandemic, Spotify had posted a string of strong quarters as paid subscribers grew quickly. The company’s momentum seemed to calm any fears that Apple Music would pose a long-term threat. Apple last reported having 60 million paid subscribers in 2019, a number Counterpoint Research now estimates to be about 68 million.

Spotify also said it had seen some weakness in a handful of regions at the start of the quarter but that most of these territories had rebounded. The company said overall results were buoyed by strength in the North American market.

The company also said its bets on podcasting have been paying off, with podcast advertising “outperforming.” The company continues to experiment with podcasting advertising, including its In-App-Offers that allow listeners to purchase products mentioned during a podcast through the Spotify app.

Another encouraging sign is that consumption trends like in-car listening have begun to recover. The company reported that in-car listening had fallen 50% following the onset of the pandemic but is now only about 10% below typical levels.