Spotify’s Q4 2019 financial and user metrics reveal that it grew its total monthly active users (MAUs) to 271 million — up 31% on the 207 million it reported for the same period last year and 9% on the 248 million from the previous quarter.

Additionally, the music streaming giant reported that paid premium subscribers hit 124 million, a year-on-year (YoY) increase of 29% and quarter-on-quarter (QoQ) increase of 10%. This means the Swedish company is maintaining a roughly 45% ratio of paid to ad-supported users.

In terms of financials, Spotify reported revenue of €1.86 billion ($2 billion), up 24% year-on-year (YoY) and 7% quarter-on-quarter (QoQ). The company also returned an operating loss of €77 million ($84 million), compared to operating profits of €94 million ($103 million) last year and €54 million ($60 million) for the previous quarter. Spotify attributed the recent drop in part to an 80% YoY increase in operating expenses, largely due to a “higher than expected” increase in social charges (payroll taxes). 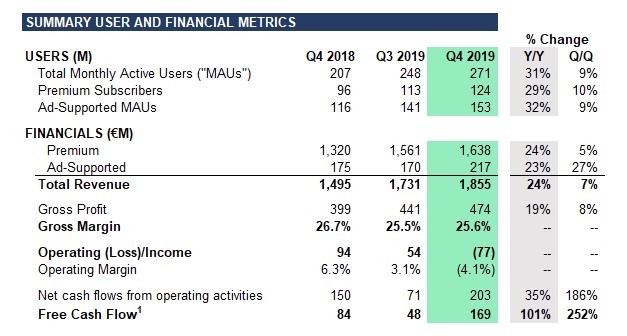 Perhaps most notably, this was Spotify’s biggest ever net addition of premium subscribers in a single quarter, and also the most quickly it has added 10 million paying users.

Podcasts have played an increasingly big part in Spotify’s growth strategy, which has involved acquiring podcast studios to create exclusive content. For Q3 2019, Spotify said 14% of its users had listened to a podcast during the quarter, a figure that grew to 16% for the final quarter of the year. Moreover, overall podcast consumption hours increased 200% YoY, though this is likely the result of Spotify’s huge bet on the podcasting medium, including creating a clearer divide between podcasts and music inside the app.

Spotify previously said podcasts are likely a major driver in terms of converting ad-supported users to premium subscribers, though it’s not entirely clear why — possibly people who listen to podcasts are simply more averse to intrusive advertisements.

“We have a growing body of evidence showing that there are significant benefits to engagement, retention, and conversion of users from ad-supported to premium, stemming from consumption of podcast content,” Spotify said. “We have seen benefits to retention on the order of several hundred basis points, which is a material change on a retention curve, for users that engage with spoken word content relative to those that haven’t, and early data indicates that these users are more likely to convert to premium over time.”

Make no mistake — Spotify will be investing a lot more in podcasting in the next 12 months and beyond. In fact, the company today announced another notable acquisition, snapping up Bill Simmons’ The Ringer sports podcast network for an undisclosed amount.

“Any decision to accelerate our investment in podcast and technology spend should be viewed as an indication of our belief that our strategy is having tangible results,” the company said. “We have gained even more confidence in the data, particularly around the benefits from podcasts, and as a result 2020 will be an investment year.”