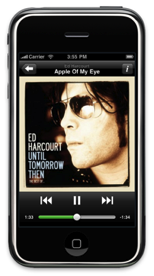 Spotify, the European music-streaming startup valued at a reported $250 million, released mobile apps on the iPhone and Android platforms today.

The mobile apps are only available to premium subscribers, who pay about 10 British pounds a month for access to a library of more than six million songs. The app lets you stream any of Spotify’s songs on a Wi-Fi or 3G connection on your phone, and it saves playlists for when you can’t reach a connection.

Founded in Sweden by 26-year-old Daniel Ek and Martin Lorentzon, Spotify’s user interface is like Apple’s iTunes except all the songs are available to stream. The company has three models: free with ads for PC users, a day pass for 99 pence to avoid ads, and 9.99 pounds a month for streaming with no ads, plus the mobile apps.

If Spotify is successful, the company would represent a new paradigm in the music business. Instead of pushing music ownership as the ultimate goal, Spotify would push streaming. The idea would be to encourage as many users as possible to paying $10 to 15 a month for an all-you-can-stream deal, or at least develop a large enough user base that advertising could sustain the royalty rates the company has to pay to record labels. As the company has said to us in the past, it wants to be “better than piracy.”

Other start-ups have tried variations on the streaming model in the past, but royalties were so high that they jeopardized projects such as Pandora and Imeem. (Pandora also doesn’t let you select which track you want to listen to like Spotify.) Another older competitor, Rhapsody, also has an all-you-can-stream model for roughly the same price and is planning to launch on the iPhone soon, but it doesn’t support offline playing.

Spotify has secured deals with record labels like Universal Music Group, Sony BMG, EMI Music and Warner Music Group and uses a peer-to-peer streaming technology that makes its speed a lot faster compared to other rivals. Spotify is available in Sweden, Norway, Finland, the U.K., France and Spain. The company has racked up more than six million users across the continent and plans to expand to the U.S. by the end of the year. Hong Kong billionaire Li Ka-Shing’s charitable foundation recently took a stake in the company, valuing it at a reported $250 million as it seeks to expand internationally.