Spotify is planning to enter the video-streaming space, according to a Wall Street Journal report, but it’s a move that would see it go up against a number of big players.

So could Spotify really enter such a competitive space, dominated by the likes of YouTube and powered by incumbents such as Vevo?

This isn’t the first time the music-streaming giant has been touted to enter the video fray, and the latest rumor comes as Spotify reveals it has “some news” to announce at an event in New York on May 20.

Reports suggest that Apple is pressuring music labels into cutting access to their music on Spotify’s free tier, ahead of Apple’s own Beats Music relaunch which is expected this year. Moreover, big-name artists such as Taylor Swift have voiced their disapproval of Spotify’s ad-supported tier and pulled their music from it, while Jay Z’s competing Tidal promises to put artists back in control of their music.

Whether Spotify is forced to ditch its free tier or not, it’s clear there is a growing push to bring “value” back to music after dwindling music sales around the world. But more importantly for Spotify, it has to find more sources of revenue beyond subscriptions and audio ads.

Spotify has 60 million active users, but only 15 million of them pay. Advertising is how Spotify has hitherto helped monetize its free users, but there is only so much revenue it can generate from audio adverts.

Spotify has dabbled in the video realm before. It has its own “Live Sessions” where artists perform their hits for the cameras, often in a quirky location. But then last year Spotify introduced video ads for those on the free tier, which was a curious move given that Spotify is largely an audio-centric platform.

The branded videos, which included the likes of Coca-Cola, McDonald’s, and Ford at launch, only play when the Spotify mobile or desktop client is open (rather than minimized). But even then, there is no guarantee that a user would actively be staring at the screen when the ad plays. This is clearly a problem for the company.

Back in February, Spotify revealed a tie-up with lyrics database company Musixmatch, so that users could sing along to their favorite songs without getting the words wrong. While the move offers a value-added service in itself for both its free and paid users, it also encourages music fans to “watch” their computer screens — and therefore view ads. Whether this was an intentional move or not, it’s clear that Spotify wants its users eyes as well as its ears, and it’s keen to explore “visuals” as a new way to monetize. 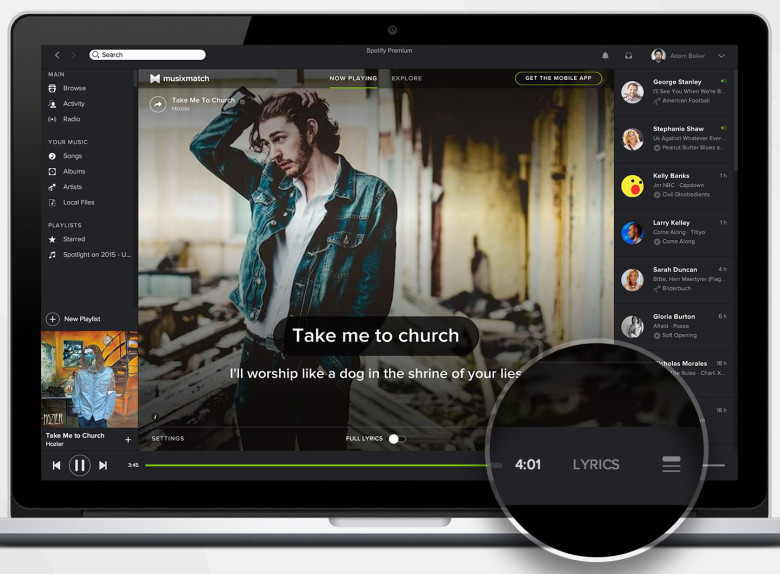 Given the clear limitations of its existing video ads, Spotify’s best bet as it struggles to turn its free users into paying subscribers is to properly embrace video as a medium. Tacking moving images onto the listening experience simply won’t work.

To monetize video ads, Spotify must provide compelling content to sell the ads against. This is why reports suggest that Spotify is looking to not only acquire video content, but also produce its own — and this is key here. There is significant value in original, exclusive content that no other provider offers, which is why we’re seeing a huge rise in companies heading down this route.

Netflix has done a stellar job of differentiating itself from the pack with its own slate of original content, scooping up seven Emmy awards last year before winning its first Oscar in January. In November 2014, BitTorrent announced its first foray into original content, while Vimeo announced last May that it was funding six new episodes of the Web series High Maintenance, which eventually aired online back in November. Even Reddit is creating its own video content.

YouTube has experimented with original content in the past through its $200 million Original Channel Initiative, but having recently hired a top content acquisition executive away from Netflix, plans are now afoot to invest more in YouTube’s top creators.

Then there’s Vevo, a joint venture involving Google, Universal Music Group (UMG), Sony Music Entertainment, and Abu Dhabi Media, which has been producing its own music-themed content for years. Vevo is perhaps what Spotify could be like if it was to morph into a video platform too.

Despite finding it hard to turn a profit, Spotify still has a strong brand in music and a hell of a lot of funding to its name. It’s far from down and out, but with investors to please and a rising tide of competitors and criticism, it has to move fast and stop the rot before it’s irreversible.

In the long term, it’s inevitable that Spotify will have to rethink its ad-supported freemium subscription model. Whether that involves ditching the free tier altogether or eroding the value of the gratis service — perhaps by making some content exclusive to the premium tier — to shoehorn users onto the $9.99 monthly plan remains to be seen. But whatever it does on this front won’t change the company’s fortunes hugely, which is why video-powered advertising dollars is its best bet moving forward.