Virtual reality firm Survios created a fine game with its Raw Data VR shooter. It made me tense and paranoid as I was surrounded by mechanical robots that I had to dispatch with high-tech weapons. Survios’ new game is Sprint Vector, a VR game where you have to swing your arms to race. This one is trying to do for motion in VR what Raw Data did for shooting.

On the HTC Vive VR headset, Sprint Vector simulates a running race, and it pits you in a multiplayer match against someone else in VR. It certainly makes you sweaty as I found in a couple of hands-on demos, where I raced against other people. I didn’t get motion sickness, and that was a good accomplishment. I could run forward pretty easily by swinging my arms back and forth. But for the life of me, I couldn’t figure out how to climb the walls in the game. And that made the whole thing very disappointing. I brought this up with the company’s CEO, and he had a surprisingly long explanation for this that made me think about the challenge of motion in VR.

I thought there should have been a much easier way to build the game controls. This was an example of a game design flaw. It actually made the process of climbing a wall much more complicated in a virtual life than it was in real life. I don’t think this game should ship in its current form.

But Survios has put a lot of thought into the design:

“There’s a motion paradigm that’s been followed for a long time, but no one has coined a name for it,” said Nathan Burba, the CEO of Survios, in an interview with GamesBeat. “The way I describe it, it’s crude, usually two-dimensional motion, plus a digital input for on or off. It’s an analog input, but we effectively use it in a digital way. A mouse is a good example. You move a mouse in two dimensions, and you can click on or off. If you had to use a mouse for gestures – the Opera browser tried to do this awhile back – it kinda sucks. It doesn’t really know what you’re trying to do.”

He added, “The [failed Microsoft motion-sensing] Kinect is the same way. Kinect would have been a massive success if they gave people a simple button to hold in their hand and use for on or off, combined with the basic motions. The reason why VR is successful is because of this paradigm. Everything we do naturally follows it – crude motion plus a digital input. That’s how you’re able to get really solid control over something.”

Survios will have more to show in the coming months. In the game, you are effectively racing downhill at 300 miles per hour, scaling up skyscraper-high walls, and diving headfirst off a 1,000-foot tower. You can eventually earn built-in weapons and power-ups and learn new movement systems such as drifting and wall-running. You can drop a “slow mine” and slow down your opponent if they hit it.

Most other games didn’t even try to do movement, because it tended to make players sick. 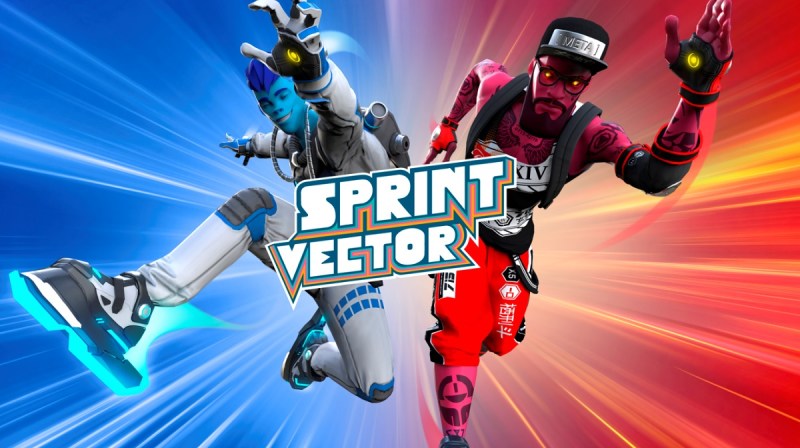 “We took that and decided to solve locomotion and really make it awesome,” Burba said. “That’s what turned into fluid locomotion and developed into the Sprint Vector prototype. We built on that, polished it, built out the art pipeline, and that’s what you see now as we’re building it into the full title.”

I think that Survios can afford to go back and design something easier. The company raised an additional $50 million in funding across two financing rounds. Metro-Goldwyn-Mayer (MGM) led one strategic financing round, with chairman and CEO Gary Barber joining Survios’ board. In addition, a prior financing round was led by Lux Capital with participation from Shasta Ventures, Danhua Capital, Shanda Holdings, Felicis Ventures, and Dentsu Ventures.

The game will be on display at the Electronic Entertainment Expo (E3) in Los Angeles next week. It will ship for Early Access on Steam later this year.

I do think that someone will solve this problem in VR soon. Survios has the running part right, where you swing your arms. But the climbing isn’t intuitive enough.

Not to get into too many technical details, but you know the concept of plyo-perception and muscle tension? Your brain has the ability to sense the tension in any of your joints at any given time through your ligaments. My finger, because it’s connected by joints — I can feel the tension in this ligament. In an inverse kinematics process, you can feel the collection of different tensions going all along the finger. YEI motion-capture suits use the same basic concept. When I feel my thumb like this, I can tell you what angle some of my joints are at, because I feel the tension in them. When I rotate my wrist I know where that tension is at. When you point a gun or steer something in VR, you can use your wrist pretty easily, because when you’re blindfolded you still always remember where that is. You feel it without having to look at it. That’s the important part.

In VR, you have to focus on things if you want to manipulate them. You don’t know where your hand is physically in space, because there are too many links between your hand and your arm, from a plyo-perceptive kinematics standpoint. If I follow this motion with this motion, it’s very hard for me to tell if my hand ends up in the same physical space as before, because it’s too far removed from a plyo-perceptive response standpoint. But you can do that with motions of your wrist.

What that means is you won’t be able to make many precise movements without paying attention to your arms. I can make a precise movement in VR if I look at my arm while it’s happening, but if I’m looking away — if I have to look out at the horizon, which is an important element of not feeling motion sick – then I’m not going to be able to control my arms in a super precise way. Because of that, you have to give someone some precise control. That’s where your controller finger inputs come in, with that precise control. Then you have to develop visual elements in the environment that help tell you how you’re controlling something as well. It’s adding all those things up.

Running in Sprint Vector specifically is kind of like skiing. I just learned to ski about six months ago. That ability to feel the tension in the snow and know how much you’re pushing off or not pushing off—there are subtle indicators that we have to develop into the game, including rumble, to give you that feeling. Once you get that sense and feel the rhythm of it, you can become very good at it. Going through fluid locomotion in VR and playing Sprint Vector is similar to the feeling of when you initially learn how to ski. That’s how I describe it.

Right. I hate to say it this way, but if you’ve gone through the mental process of climbing in your brain – if you fantasize about climbing – you’ll be a better climber in VR. Maybe you should have climbed more in real life, is what I’m saying. [Laughs] Or you should have imagined it more.

Originally. you used the side button to climb. We had three buttons. We reduced that because it was too much process for your brain to remember. With a lot of it, we’re working around the design of the Vive controller. The Vive controller is in some ways well-designed and in some ways poorly designed. It’s a first version of what a VR controller can do. We’re making do with what we have. For example, we used the touch pad as a giant button because it’s much easier to interface with if you consider it that way.

There are two elements to climbing. Or it’s the same element, but — it’s your brain’s expectation of what climbing feels like and how you imagine climbing to be in your mind’s eye. That’s what we designed climbing to feel like ideally in the game. Then we take an average of the mind’s eye from the customer — you take 100 people and say, “Describe climbing to me. What does it feel like? How does it work?” You try to design for that. That’s the process of making something intuitive. How do you imagine it to be?

Sometimes what’s funny is that most of those people have imagined climbing, but not many of them have done it. Sometimes people will come in and tell us we’ve designed a weapon in Raw Data incorrectly because it doesn’t work like that weapon in real life. But in reality, we’re designing it based on what people think a weapon works like.

Climbing is the same thing. I’m terrible at climbing. I’ve done rock climbing once or twice, and I’m awful at it. But I’ve seen Cliffhanger and Mission: Impossible and all these movies. My mind’s eye view of climbing is pretty — I’ve got a lot of information there. That’s what we’re designing for. That’s where it starts. Then you use the grab button, the analog button on the trigger. We’re using that on the Vive as an analogous input for your hand gripping. Your brain is able to make the leap that your index finger is similar enough to all of your fingers grabbing. Your brain does this all the time. You’ll grab a coffee cup completely differently from grabbing another object. Your brain is always slotting in different variations on the motion. So it’s easy to slot that in as a “grab.”