Square ($SQ) has released the results of its third quarter financial earnings, revealing that it generated $439 million in net revenue, up 32 percent annually, but had a net income loss of $32 million. Its Gross Payment Volume (GPV) now stands at $13.2 billion, an increase of 39 percent yearly.

Wall Street analysts had estimated that the commerce company would bring in $430.09 million in revenue with an earnings per share loss of $0.11.

The company’s stock closed the day down 1.25 percent at $11.06 and is currently up more than 2.25 percent in after-hours trading, following a revision in its fiscal year 2016 guidance and better-than-expected results. It’s notable that when the market closed, Square was trading below where it began trading when it went public last November.

Much of Square’s revenue came from transactions powered by its card readers. For the third quarter, it brought in $388 million, an increase of 38 percent from the same time last year, and made up 2.93 percent of GPV. In a bit of a downside for Square, transaction revenue’s share of GPV dropped 0.02 percentage points from the prior year period. 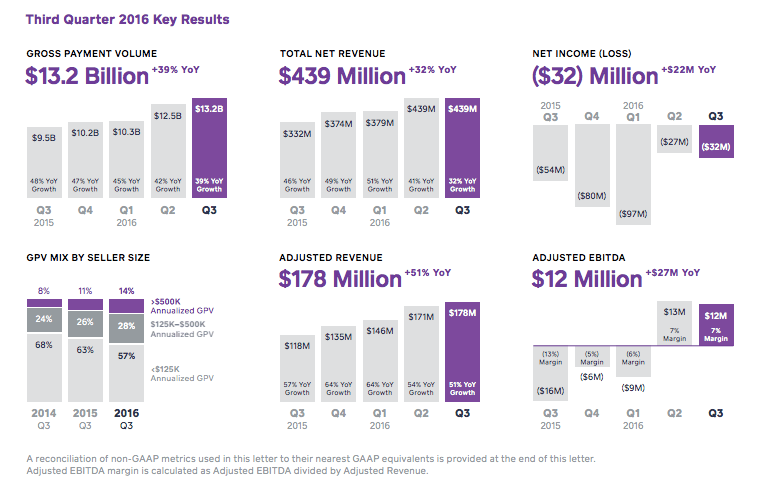 Square is still losing money each quarter, and if you look at its early history as a public company, the loses were pretty massive, including, most recently, a loss in Q1 2016 of $97 million. But in the past two quarters, the amount of loss has been decreasing to its current $32 million in the third quarter.

Software and data product revenue was $35 million, with an annual growth of 140 percent driven by Square Capital, Caviar, and Instant Deposits. The company claimed that weekly order volume has “grown more than 11x” since Square acquired Caviar in 2014, and the “average annualized GPV of a seller that uses both Square and Caviar is greater than $500,000.” While the company didn’t break out specific figures for its programs, one must wonder about the performance of respective services, especially in light of reports suggesting that Square was looking to sell Caviar for $100 million.

As for its long-term business bet with Square Capital, the company shared that it has passed $1 billion in total originations since the program’s launch two years ago. In the third quarter, more than 35,000 business loans have been processed, totaling $208 million, for an increase of 70 percent annually. It claims a low loss rate of 4 percent.

Last quarter, Square stated that it would continue to handle Starbucks’ payment processing for a bit longer. When the commerce company announced that it intended to go public, it also disclosed that its partnership with the coffee retail giant wasn’t working out and said that the relationship would terminate. Today, Square said “Starbucks’ transition off of our infrastructure is nearly complete” and added that it expects that it’ll see “nominal” revenue and transaction profit from Starbucks next quarter.

Some may wonder whether Square has suffered from its chief executive holding two jobs, running two companies that could both be doing much better. Jack Dorsey has since fired back against such speculation. He defended his leadership roles on stage at the Money 20/20 event last week, saying “I want to work on things that people interact with every single day, and that empower them in particular ways, and finance and commerce is one such [way] and communication is another.”