Tech company media events broadly divide into two categories: Apple-style events where completed new products are revealed just before they hit stores, and Qualcomm-style events where new technologies are revealed well ahead of actual availability — sometimes without even naming the first products that will include the innovations. Rather than proclaiming one type of event better than the other, I view both as valuable. Apple reveals “what is now,” while Qualcomm shows off “what will be.”

Qualcomm’s problem — and by extension, everyone else’s — was that it didn’t have an actual product to announce with its super chip. Pokémon Go developer Niantic said it was planning XR2-powered AR glasses but didn’t offer a timeline or imagery, and Qualcomm suggested that OEM announcements would follow on its partners’ schedules. Two months later, French startup Lynx promised a summer 2020 release for the first XR2-based headset, the $1,500 Lynx R-1. As of mid-September, however, the R-1 hasn’t shipped, and Lynx is still guaranteeing “products from the first batch” to people who preorder today. 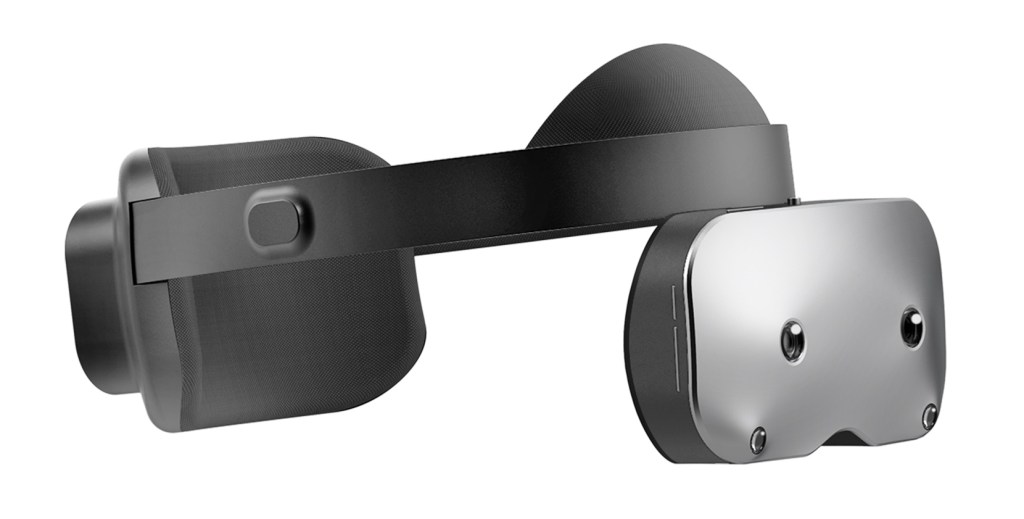 Though Qualcomm didn’t respond to an inquiry on this point, there are signs R-1 won’t be the first Snapdragon XR2 headset to market. This week, supposed Geekbench 5 results popped up for an unannounced HTC Vive Focus model with the XR2, and the specs matched up with what’s known about the new chipset’s likely configuration: an 8-core CPU running at 1.8GHz, paired with Android 10. The results include single- and multi-core scores of 924 and 3415, multiple times faster than numbers seen in Snapdragon 835-powered headsets like the Oculus Quest (267/746). Memory details added credence to the results, matching up with expectations that the XR2 will generally be paired with 6GB of RAM, up from 4GB in prior-generation solutions.

Enterprise users may be interested in the new Focus — the Focus Plus costs roughly half what Lynx plans to charge for R-1 — but I don’t think these will be the only Snapdragon XR2 headsets available in the foreseeable future. In fact, I believe XR2 is on the cusp of being adopted by consumer VR and AR headset makers, just as Qualcomm foreshadowed to VentureBeat last year. This means we’re finally ready for standalone mixed reality to take its long-awaited big leap forward.

Bear in mind that while Qualcomm provides both the chipset and reference platforms to developers, finished XR2-powered headsets will vary from company to company. For example, the fact that the chipset can theoretically power displays with 6 times the resolution of prior VR screens does not mean a Focus sequel will in fact deliver 6 times a given headset’s prior resolution. Historically, Qualcomm provides the chip-level capability, but it’s up to each OEM to pick the parts that make sense for a particular audience, a set of applications, and a price point. 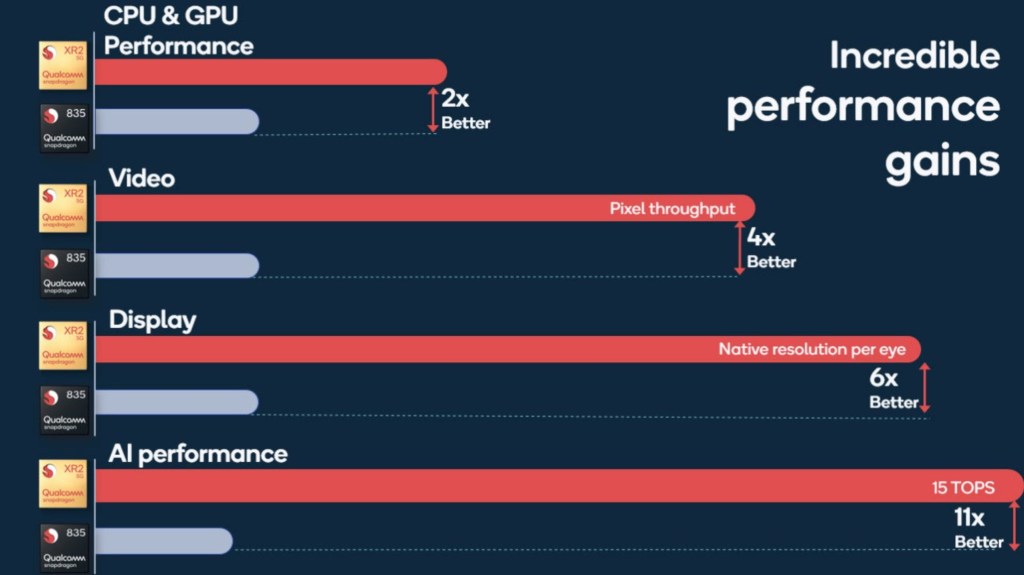 I strongly believe the general trend will be toward higher-resolution VR displays, but with multiples in the 1.5-2X range, rather than 6X. Several months ago, I discussed the noticeable difference in visual clarity offered by Pico’s Neo 2, which offers 1,920×2,160 resolution per eye, nearly twice the detail delivered by Oculus Quest’s dual 1,440×1,600 screens. Under the right circumstances, screens at that resolution can be largely free of the “screen door effect” that let users see individual pixels within black grids, putting the onus on GPUs to deliver enough polygon and texture detail to wow users.

Since the Neo 2 is powered by a Snapdragon 845 — a chip that’s roughly halfway between the 835 and XR2 in performance — I’d expect XR2 headsets to surpass Pico’s offering. As I noted in June, the Neo 2’s graphics look like higher-resolution versions of Quest visuals, at an imperceptibly faster refresh rate (75Hz versus Quest’s 72Hz). Based on what Qualcomm has said about XR2 and what Lynx has shown for the Lynx-R1, it’s fair to assume the new crop of headsets will typically if not universally use 90Hz refresh rates. That means PC-class display speeds, with a lower likelihood of nausea. 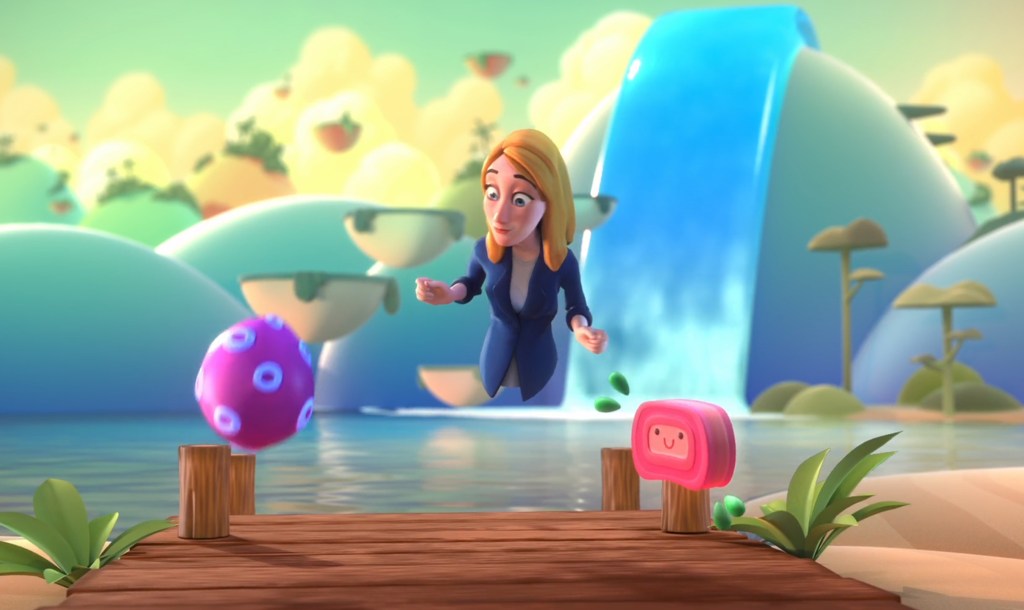 Above: Facebook Horizon is a virtual social space for shared interactions and entertainment experiences.

Facebook surprised everyone with the Quest’s performance this generation, wringing more complex visuals out of the Snapdragon 835 than anyone (save perhaps a 3D graphics wizard of John Carmack’s caliber) could have imagined. Qualcomm suggested the XR2 has twice as much CPU and GPU power as the 835, but if the early benchmarks can be believed, that’s underselling the new chipset’s abilities. Since the Quest was able to approximate — not match — the graphics in PlayStation VR titles, it’s fair to expect that XR2-powered titles will rival current-generation console VR, if not entry-level PC VR. Beyond games, this means social applications such as Facebook Horizon and productivity/streaming apps like Virtual Desktop could look roughly as detailed, complex, and smooth on an XR2-powered headset as on the Oculus Rift.

One caveat: “Current-generation” and “entry-level” are moving targets. Today, we’re only two months away from a console generation transition, and even basic PCs continue to improve in graphics performance every day. There’s no way in the world mobile-class XR2 headsets will fully eliminate the need for high-spec dedicated machines, but if the Quest’s trend continues, the visual delta between tethered and tetherless headsets will matter to fewer people.

What about XR2 AI?

While the raw numbers were revealed last December, Snapdragon XR2’s AI processing capabilities are underappreciated and could be a major factor in improving mixed reality headset performance. Here, the gap between Snapdragon 835 and XR2 is an 11X improvement — 15 trillion operations per second (TOPS) versus roughly 1.3 TOPS in the 835. That’s two-thirds more than Qualcomm includes in the laptop-class Snapdragon 8cx Gen 2 and, on paper, equivalent to what’s in the flagship-class Snapdragon 865 smartphone chipset.

I say “on paper” because the raw number of instructions doesn’t necessarily tell the whole AI performance story. Quantity matters, but so do quality and system-level engineering and software considerations that make use of the capabilities. That said, if you think back to the early days of the Oculus Quest, the limited computer vision system magically delivered room-scale SLAM scanning and 6DoF controller tracking, which Facebook subsequently software-updated to add impressively smooth hand tracking. Imagine what a headset with 10 extra times the AI horsepower could do with tracking and cameras — then assume that offloading some AI-related tasks from the CPU will also free it up for better general purpose performance. 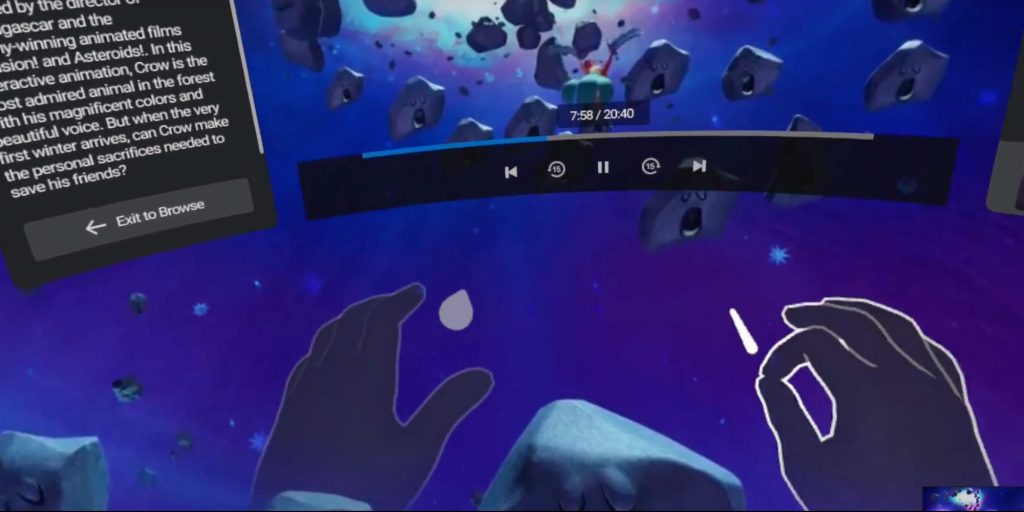 There are other ways AI capabilities can impact the performance of mixed reality headsets, including empowering smarter computer opponents and generating solutions for semi-novel problems. They’ll also enable richer voice controls and — for augmented reality headsets — help with segmenting live visuals so they can be seamlessly blended with digital content.

Thanks to the COVID-19 pandemic and general economic uncertainty, many XR developers’ plans changed in 2020. Magic Leap imploded; HTC’s CEO resigned; Facebook renamed Oculus Connect and moved it entirely online; and multiple VR developers pivoted, sold themselves off, and/or shut down. To the extent Lynx might have believed in February that it would hit its promised summer date for R-1, it’s not exactly surprising that it didn’t.

Nothing’s certain at this point, but I’m pretty confident we’re close to seeing Snapdragon XR2 headsets in stores — notably, early ones without 5G connectivity, rather than more deluxe models that will combine robust CPU/GPU/AI horsepower with the freedom of a cellular connection. I wouldn’t expect those until next year, at the earliest, and even then only in territories with more robust 5G infrastructure than we currently have in the United States. When that happens — and it’s when, not if — we’ll start to see VR and AR everywhere, and that will be another huge step forward for this already exciting and rapidly evolving collection of technologies.