Jedi Knights aren’t known for simple brute force. And that’s one reason why the combat in Star Wars Jedi: Fallen Order — which Electronic Arts and Respawn Entertainment showed off yesterday in Hollywood — is slower paced and more thoughtful than your average shooter.

The action-adventure game debuts on November 15 on PC, PlayStation 4 and Xbox One. But I had a chance to see an extended demo of the game and then sit down with two technical developers — Jiesang Song and Brandon Kelch of Respawn — at the EA Play event in Hollywood ahead of the Electronic Entertainment Expo (E3) in Los Angeles.

In the game, you play as Padawan Cal Kestis, one of the only surviving Jedi in the wake of the rise of the Galactic Empire. You find yourself on Kashyyyk, the Wookiee planet, on a mission to set free a bunch of imprisoned Wookiees.

As you can see in the trailer, Cal can use The Force to throw enemies against walls or hit them with big objects. He can even slow down time and evade blaster bolts. But the Force is on a cooldown meter and Cal can’t use it all the time. This keeps the combat interesting and more thoughtful, as you have to figure out exactly how much Force and fighting skill to use.

I talked with Song and Kelch about the challenges of creating the game in an interview at EA Play on Saturday. Here’s an edited transcript of our interview. 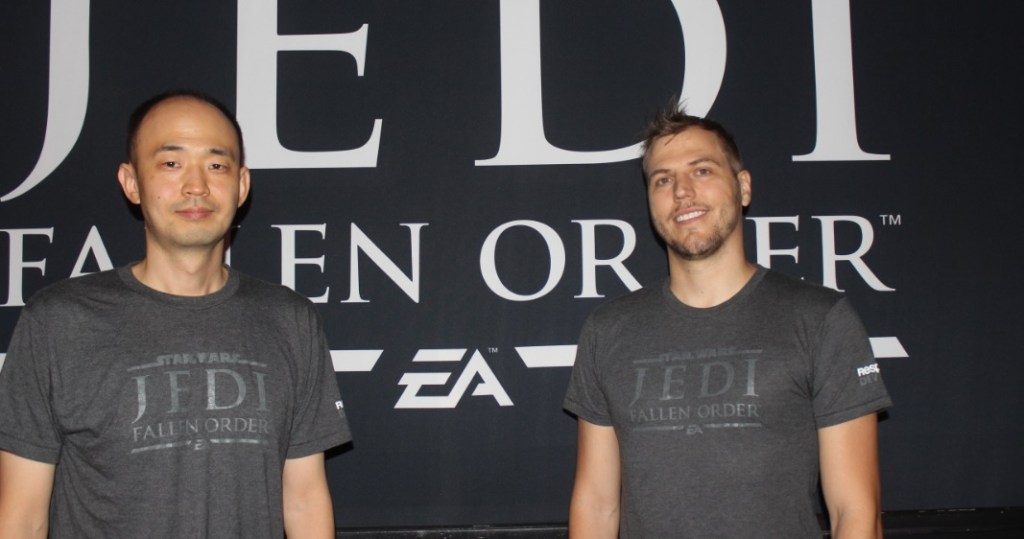 Above: Jiesang Song (left) and Brandon Kelch of Respawn at EA Play.

GamesBeat: Can you summarize what you wanted to show in the presentation?

Jiesang Song: We wanted to show a game with lightsaber combat, navigation challenges, and a narrative driving it.

GamesBeat: Since we weren’t playing it, what are some nuances we might have missed just from watching it?

Brandon Kelch: Respawn games have to feel really good. That’s on our logo. The Respawn logo is the braille “R.” They feel good. That’s what you didn’t get from just watching. Unfortunately, you’ll have to get that when you play the real game. But there’s been a focus from day one on everything feeling good. The combat, all the stuff you see is real gameplay. It’s not canned, scripted moments or anything like that. Everything flows really well together. It’ll all feel great.

GamesBeat: I assume the Jedi powers must be on some kind of cooldown? You’re not using them all the time.

Song: There’s a meter. Every Jedi power uses some of that, and there’s a limit to the meter. But as you progress in the game, you can increase that meter as you discover new stuff. 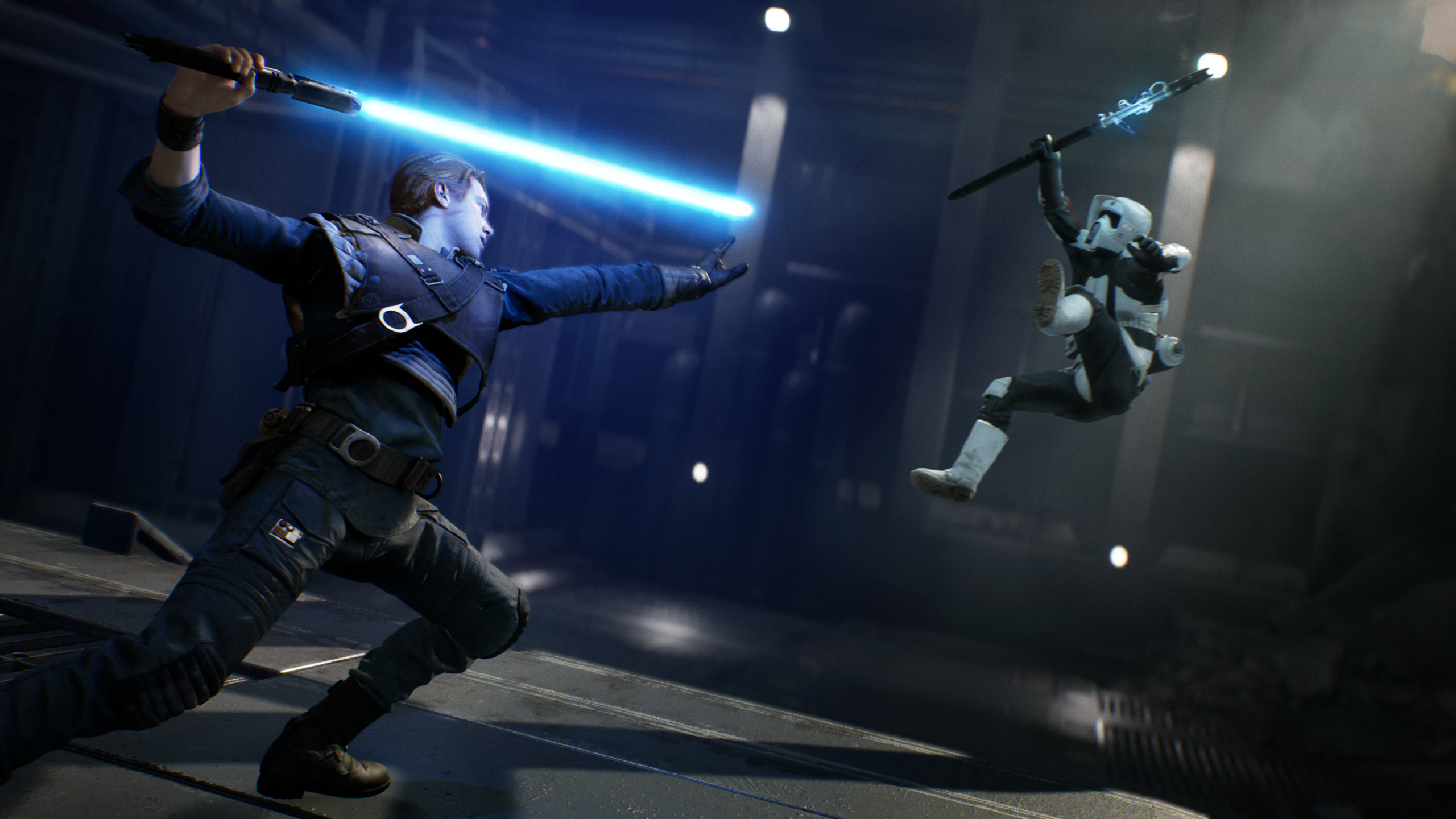 Above: Scout troopers can be a little pushy.

GamesBeat: The Force push: You might use that on one enemy, but then two other guys would come up, and you have to take them out some other way.

Kelch: Exactly. There’s a Force meter. That was something that we worked on throughout the project, playing with different ideas. But essentially, yeah, the Force powers are extremely powerful. They’re Jedi-specific. We limit how much you can use. It takes Force concentration to use it, and so you have that meter and it drains as you use your powers. You’ll have to think about how you’re going to use them and strategize around that.

GamesBeat: The bad guys with the electrostaves: Can you describe them? Are they using the Force against you?

GamesBeat: And then you’re progressively going up to meet more difficult enemies, then. Is this about the middle of the game?

Kelch: Yeah, this is — I’d say this is maybe a third of the way through the game. You saw in the demo that you gain skill points. Your character does level up and progress throughout the game. The difficulty of the enemies you’re facing, the challenge will rise to meet that.

Song: It’s also one possible scenario, where you could have arrived there with a different set of powers.

Kelch: That’s true. You might be a different kind of Jedi. 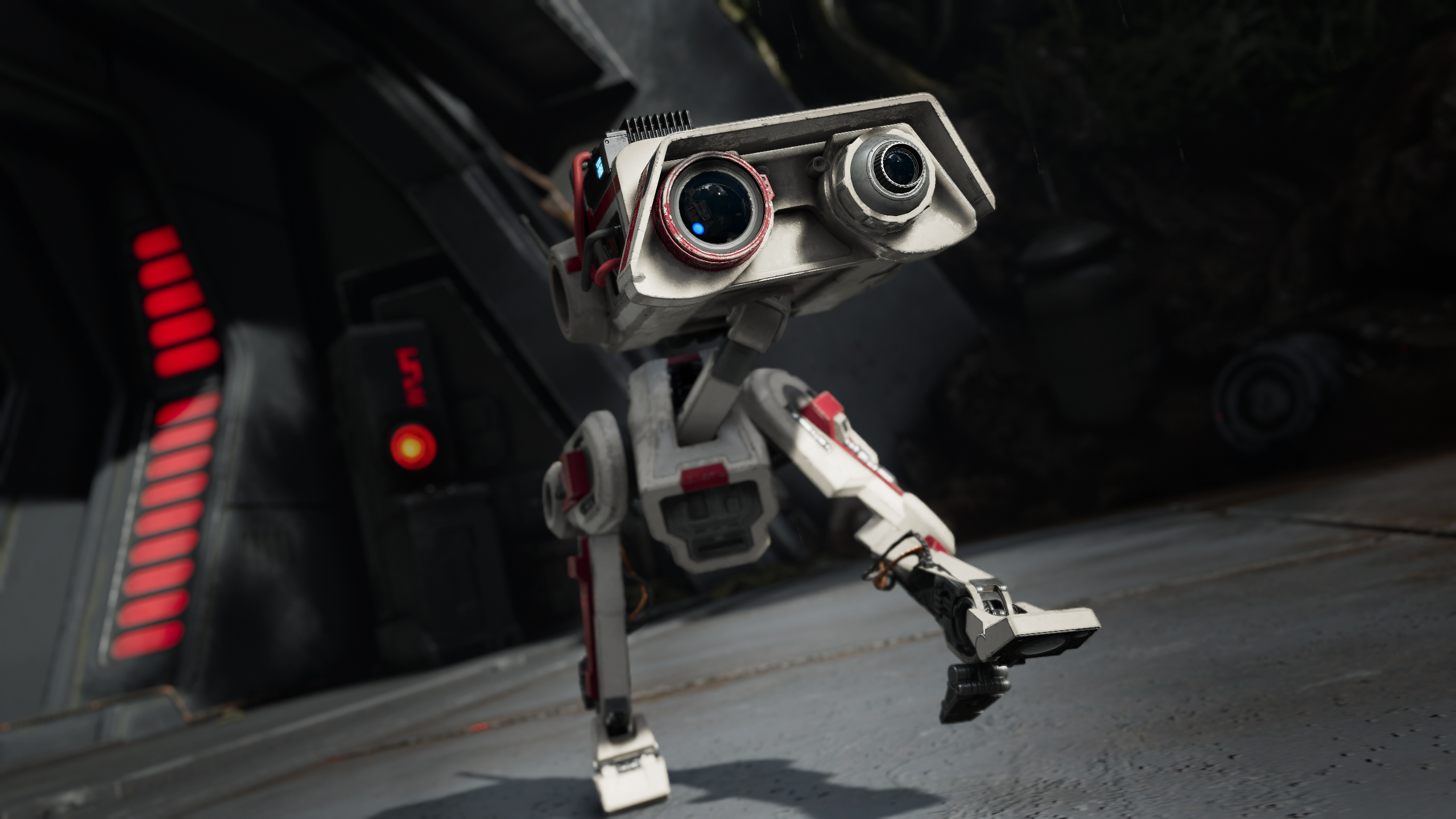 Above: BD-1 is your best friend.

GamesBeat: There’s an RPG element there, then, leveling up and choosing things?

Song: Not in terms of numbers, but the skills you have, and also depending on which areas you’ve gone to before. You might have unlocked different things. In the demo, you saw one playthrough, but there are many different branches you can follow, both within the demo and at the end of the demo as well.

Kelch: Once people play this, it’s not going to be what they expected. It’s a new, refreshing experience in the Star Wars universe.

GamesBeat: It looks like there are some things that are borrowed from the Titanfall universe. The wall-running is an obvious one. Are there some other things that you could apply to being a Jedi?

Song: That’s the only one I can think of?

GamesBeat: I’m not sure if the time-freezing to get out of the way of the laser bolt, and then grabbing the guy to put him in front of it — is that something from Titanfall?

Kelch: Oh, I get you. That originally–the freeze is more like a slowing effect, Force slow. It makes things go really, really slowly, instead of a full freeze. I think that came from–we all watched Force Awakens, obviously. Kylo Ren had that scene where he freezes the blaster bolt. We all saw that and thought, “Whoa, that’s awesome. We have to do something like that.” 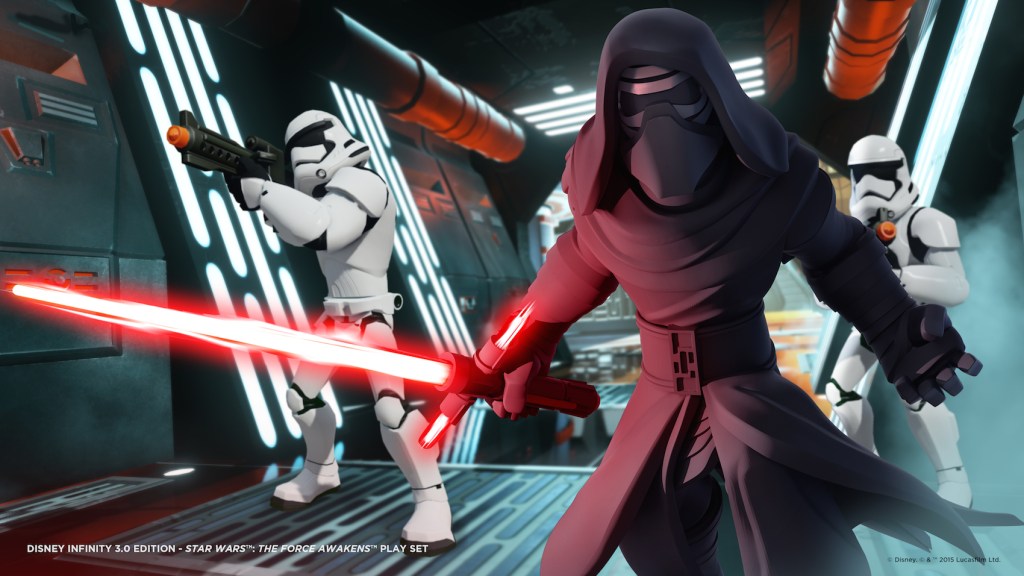 Above: From an old game: Kylo Ren and the First Order stormtroopers in Disney Infinity 3.0.

GamesBeat: On the technical side, what would you say is the most challenging for you in making sure that this game runs smoothly? It looks a little slower-paced than the average shooter.

Kelch: It’s slower-paced because we wanted to build thoughtful combat. We didn’t just want to build a button-masher where you charge in and spam one button and everything dies. We wanted something that was more methodical and thoughtful.

As far as technical challenges, you saw in the demo–we tried to create a completely seamless experience. We don’t have loading screens or full cutscenes. We don’t play cutscene movies. There was a lot of challenge in getting everything to be seamless — climbing up the AT-AT, getting inside, piloting it, crashing it, and seeing the Stinger Mantis land. That was very challenging, getting all of that to flow and feel good and run in the frame.

GamesBeat: It doesn’t necessarily seem like you can really get into a lot of trouble on the current generation of consoles. The performance demands don’t seem like they’re stressing out the systems.

Song: It’s the same for every game right now. The consoles have been out for a long time. There’s still a challenge in making it work on the high end and still look good on the low end.

GamesBeat: I had trouble with Days Gone because there were so many cinematics, but it would also just load for a long time. 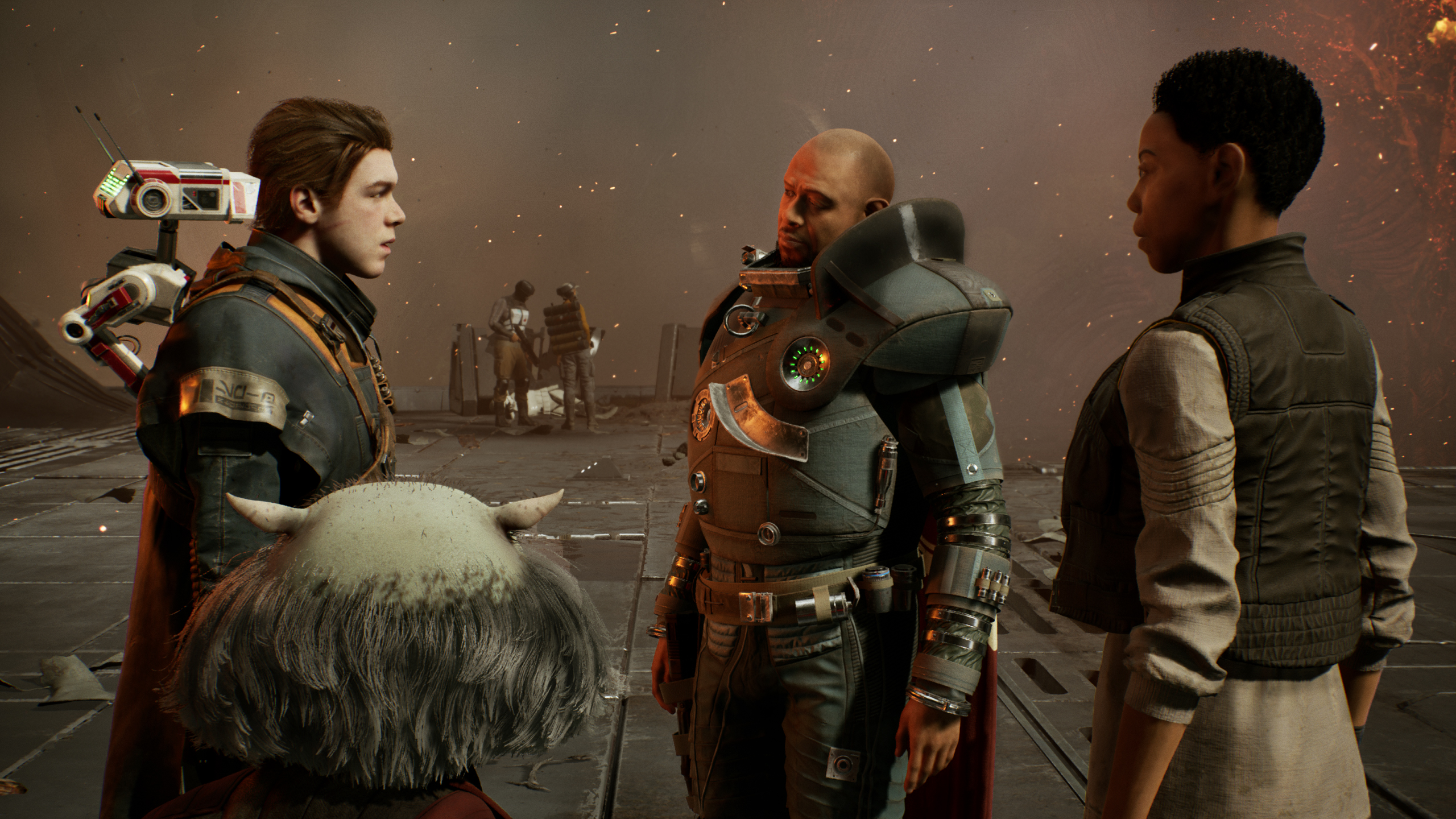 Above: Saw Gerrera (middle) — is a friend, or a problem?

GamesBeat: Making it invisible is the challenge.

Kelch: Yeah, yeah. We do our loading in the background. It’s hidden. We’re constantly loading while you play the game. That’s going to give the player a much better experience, not having to look at a loading screen. That takes a lot of work.

GamesBeat: As far as what you’re showing here, you have Kashyyyk. Is that the only planet we’re seeing right now?

Kelch: There are other planets. We can’t speak to a number right now, but there are others. I know we’ve talked about Bracca, the one you saw in the previous trailer at Star Wars Celebration. That’s the planet where Cal starts out. We have planets that are like Kashyyyk, where we’ve already seen it in the Star Wars universe, and then there are new planets we’ve added that will become part of the canon in the Star Wars universe.

GamesBeat: Why is the walker all covered with the jungle brush? Did it get stuck in the jungle somewhere? It’s pretty convenient to climb on, at least.

Song: It’s coming out of muddy, log-infested water, so–

GamesBeat: It’s been around Kashyyyk a lot.

Kelch: Yeah, it’s been on Kashyyyk a while. [Laughs] It still moves, but it’s getting a little bit run down. Cal’s a Jedi, anyway. He would have found a way in regardless.

GamesBeat: The droid seems to add a tech element to the Jedi gameplay. It helps him get around, get across things. I thought it was cute that it perches on his shoulder.

Kelch: He’s your companion, your buddy droid. We wanted to create a game where–you have your crew. You saw Cere, and obviously, you met up with Saw Gerrera. But for the majority of the game, it’s kind of an isolated experience. Cal is on this journey to find himself and find the Jedi and rediscover the Force. It’s cool to be on these alien planets, all alone, exploring and fighting for your survival, but in order to add some levity and some fun, we added the buddy droid. BD-1 is great for having little moments with Cal and telling stories to the player. 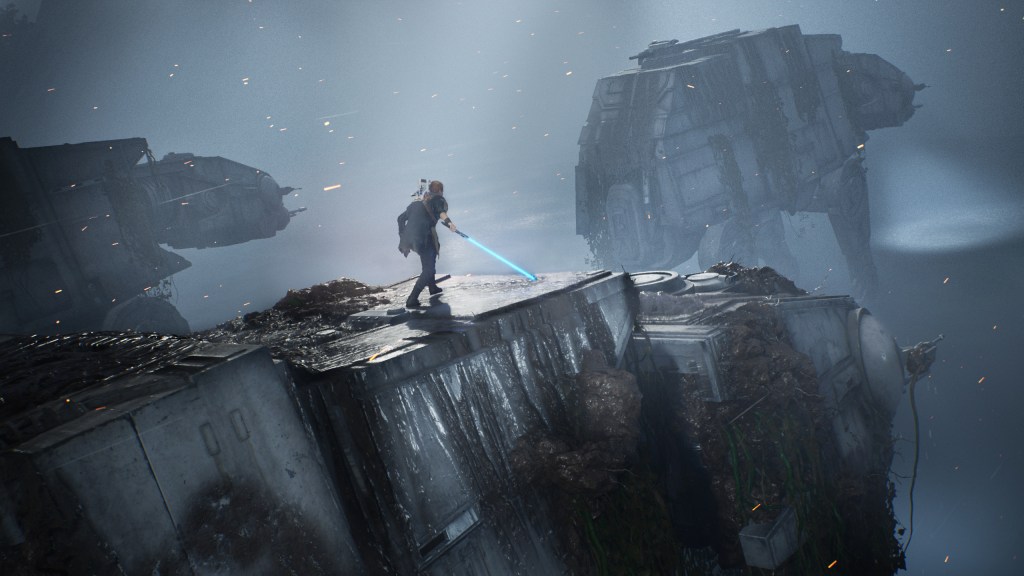 Kelch: Yeah, he adds a lot of fun and Star Wars flair to the whole thing.

GamesBeat: What’s the development process been like, how you guys got here?

Kelch: It’s been a long road. Stig [Asmussen] joined Respawn in 2014 and started building a team from scratch. Obviously, Respawn was working on Titanfall and Apex, and then we built another team, a full-fledged new team to work on Star Wars at the same time. It’s really impressive that, as a studio — it’s been awesome to see two entirely separate triple-A teams running at the same time and producing quality content.

GamesBeat: Did you personally have to choose between Titanfall and Star Wars.

Song: I moved from the Titanfall team to the Star Wars team. The Titanfall team has been working together for a very long time. The Star Wars team is a very diverse team. The way someone on the team put it, at this point we have someone from almost every major triple-A studio working on the team. There are a lot of experts in different areas, and a lot of different points of view. It’s been good.

GamesBeat: Was it difficult for you to leave Titanfall behind, at least for now?

Song: I’m still in the same company with them, and we still share information. It’s been exciting to work on Star Wars.