Among the toys on display at Lucasfilm in San Francisco is an app-controlled Hasbro’s Ultimate D-O Interactive Droid, who is the new droid character being introduce in The Rise of Skywalker (coming December 20). Made by Hasbro, D-O is a robot toy that zooms around on a unicycle and maneuvers in interesting ways. You control it with a tablet or smartphone app. 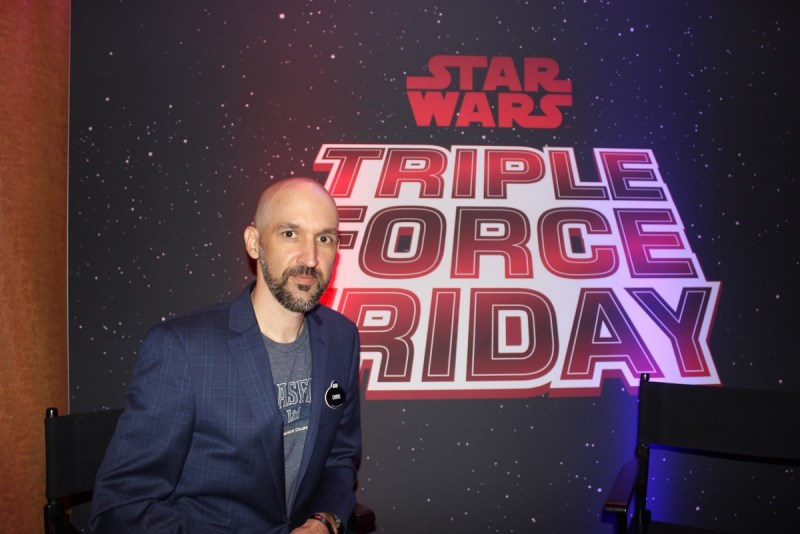 Above: Chris Dern of Lucasfilm

Hasbro is a traditional toy maker, of course, and it made a lot of the non-tech toys. But it has its own robotics lab and stepped up to create the sophisticated electronics for D-O, who is like BB-8 droid the previous two films, said Chris Dern, senior product development manager at Lucasfilm, in an interview with GamesBeat.

But D-O has a bit more personality, expressed through lighting colors, movements of its head, and the antennae on the back of its head. You can use the app to express different emotions like happiness or sadness, as well as send D-O zooming around the room within the 30-feet range of Bluetooth. 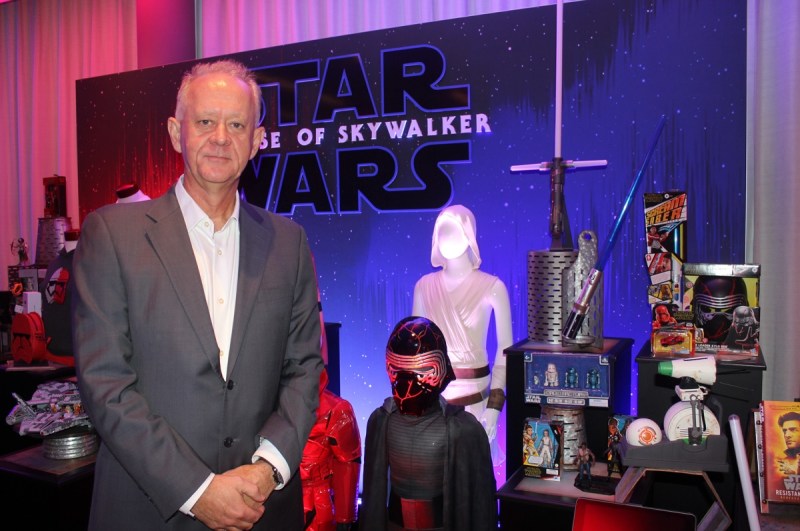 Above: Paul Southern, senior vice president of licensing at Lucasfilm.

D-O has been in the works for no more than 18 months, as everything has to be done on a faster timetable now that the films have been coming so fast, said Lucasfilm’s Paul Southern, the senior vice president of licensing, in an interview. 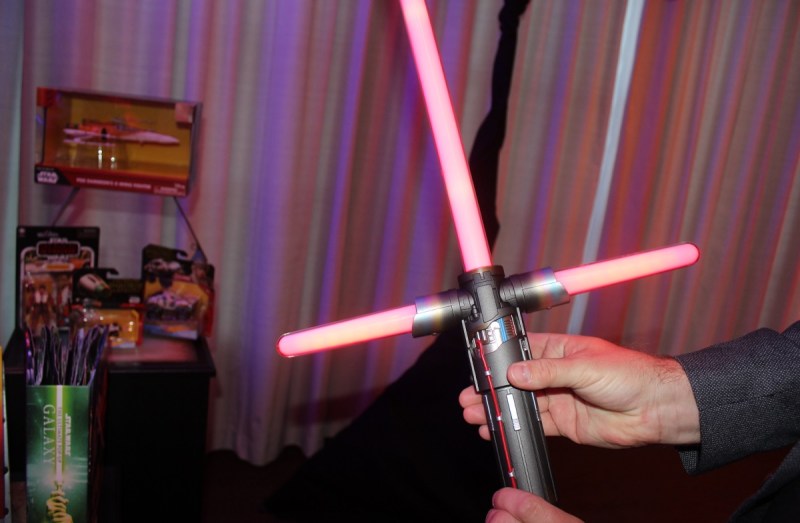 Above: Kylo Ren’s lightsaber is getting another toy.

There were dozens of different toys and other merchandise on display at an event at Lucasfilm. My favorite was a Kylo Ren lightsaber that pulses with a red liquid. It’s very heavy, and you can press a button that generates a green glow as if you’re melting something with the tip. It is different from the pricey lightsabers on sale at the new Star Wars: Galaxy’s Edge at Disneyland. 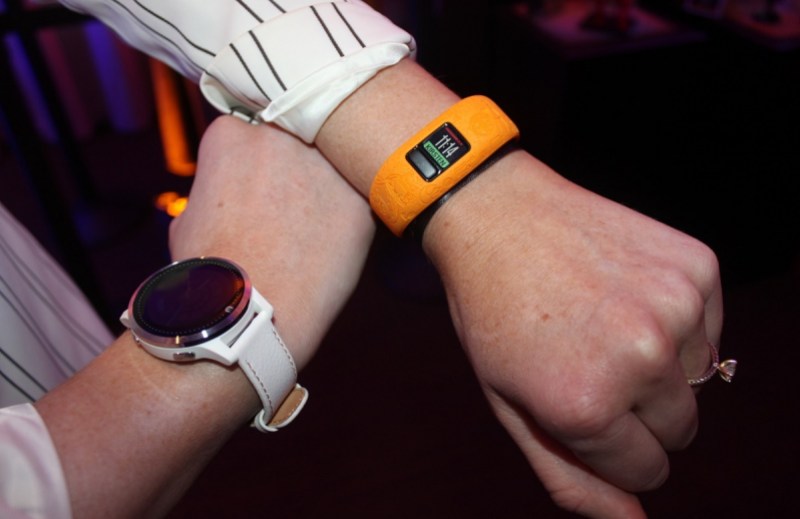 Garmin, the navigation products company, also came up with Star Wars-themed smartwatches such as a white watch that is based on Daisy Ridley’s Rey character, the LegacySeries  Rey Smartwatch. Other tech products include the radio frequency identification wearable for the Disney theme parks, now with a Star Wars theme. 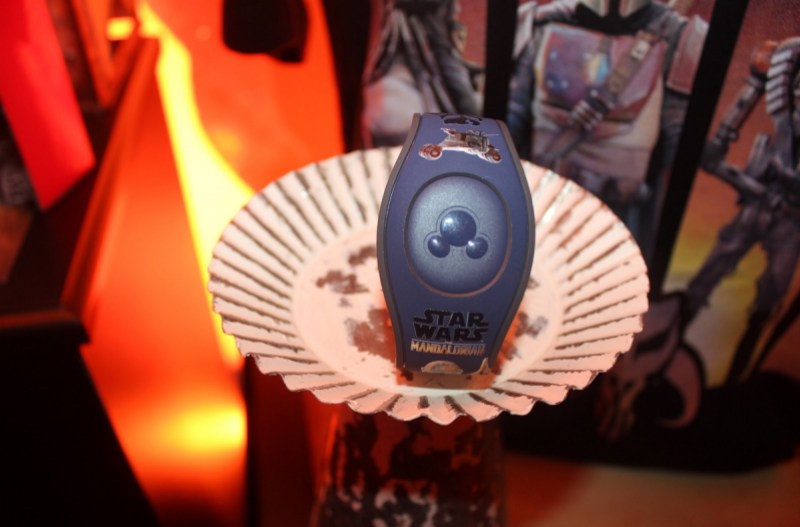 Southern said there are more waves of products coming, some that have been held back so that they don’t spoil anything in the film or other entertainment. He said that the video game itself is seen as its own independent entertainment, not just another form of licensing for the film.

“It has its own story, connected to the Star Wars canon,” Southern said. “It’s a separate, standalone story 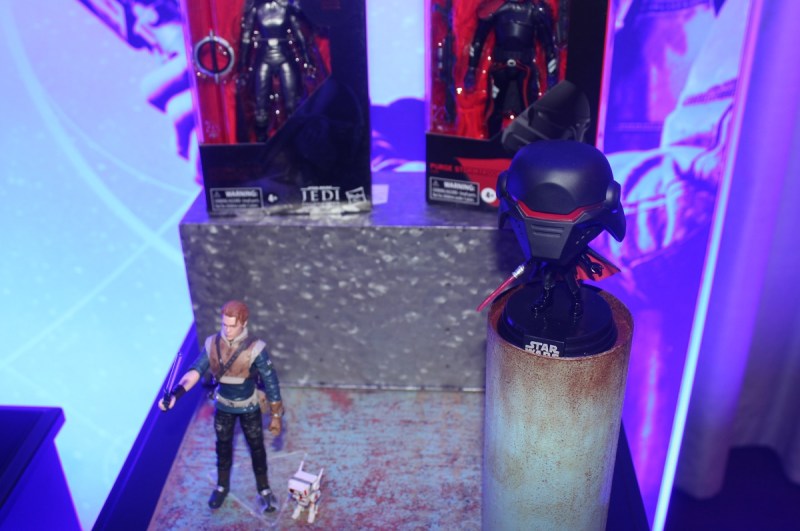 Above: Jedi Fallen Order gets action figures, too.

As such, it has its own merchandise, like an action figure based on the main character Cal Kestis, as well as a comic book, art book, and other products.

“The goal is to very closely with the content creators with the filmmakers and the TV creatives and with game developers to make sure that we are wherever we can, we’re really reflecting the storytelling in their content,” Southern said. “With digital technology and modern manufacturing processes, we can really get the integrity of the characters down to fine detail. We want the storytelling to be a direct connection to the content we sell.”

He noted the unicycle tech created by Hasbro was particularly difficult to build from scratch. Kano also created a programmable Force Sensor Kit, which can detect the presence of your hand. You can use an app to program the lights on the sensor. The app is part of an effort to use tech and Star Wars to teach kids how to program.