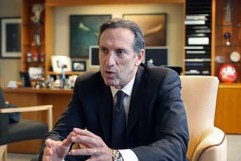 Starbucks, one of the first companies to install Wi-Fi networks in its coffee shops in 2003, will remove all fees and registration requirements from the service beginning July 1. CEO Howard Schultz (pictured) announced the plan this morning at Wired magazine’s Disruptive by Design conference in New York City.

Starbucks describes its new networks as “free, one-click Wi-Fi.” That’s a big improvement from the previous system, which required users to haul out their credit cards or sign up for subscription or pay-as-you-go access through AT&T, which won the Starbucks account from original provider T-Mobile in 2008. Schultz told the conference audience that, in short, customers had told the supergiant latte chain that they would be more loyal to the brand if they didn’t have to fiddle with login screens to get online.

The simplified, hurdle-free Wi-Fi networks are part of Schultz’s attempt to refocus the Starbucks brand around coffee, lightening the focus on other products and services. Wi-Fi and the Wall Street Journal will be freebies designed to bring people into the store for their coffee, rather than trying to monetize the networks.

(Not to brag, but in a Wired article in 2003 I urged Starbucks to do exactly that: Operate free wireless networks to lure nearby laptop users, as the 600-store Schlotzsky’s Deli did at the time. The current coffeehouse fad in San Francisco is to offer free Wi-Fi but remove electric power sockets from the customer area, so laptop users can’t entrench themselves for longer than their batteries will run without a recharge.)

A Starbucks press release lists the details. Not only will laptop users be able to connect without hauling out their credit cards or handing over personal information in the form of an account, they’ll also be able to see additional in-store content created by a partnership between Starbucks and Yahoo. The Starbucks Digital Network, as it will be called, will offer The Wall Street Journal’s WSJ.com site for free to people surfing in Starbucks stores.

Starbucks, founded in Seattle in 1971, hired Schultz in 1982. Schultz became chairman and yielded the CEO seat from 2001 to 2007, but returned to his President and CEO roles in 2007 in an attempt to turn around the company, which had closed 600 underperforming stores from its worldwide roster of 6,400-plus sites.