Games in the explore-expand-exploit-exterminate (4X) strategy genre can last forever. That’s not just a commentary on how long they can often take to finish, because they can also last forever as viable products on PC gaming marketplaces like Steam. And publisher Stardock is planning an update to one of its games to keep it going even longer. 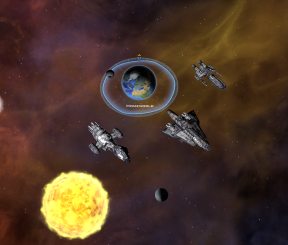 Above: GalCiv III: Crusade enables easy ship customization and sharing in case you wanted to pilot the Mal Reynold’s Serenity, for example.

Galactic Civilizations III, the 2015 sci-fi strategy game, is getting something of a reboot in the form of its Crusade update on May 4. You can get this downloadable content without owning the original game for $40, or you can buy it as an add-on for $20. GalCiv III: Crusade introduces a number of major features that should make it more complex and interesting. Some of those additions include a Civilization Builder, a simulation of the galaxy’s citizenry, and upgraded graphics.

More important, Crusade could give a boost to the game’s player engagement, which has fallen off in favor of other 4X games like Sid Meier’s Civilization VI and other galactic sims like Paradox’s Stellaris. By giving existing fans extra content that should deeply change the game and by giving potential new players an easy way to get on board with the action, Stardock could jump start interest in this series.

In a post on the official forums, Stardock chief executive officer Brad Wardell explained that this is almost like the fifth major release in the series after the original in 1993, the reboot in 2003, GalCiv II in 2006, and then GalCiv III in 2015.

“Crusade is a top-to-bottom update of the entire game,” Wardell wrote in a post.

Here’s a quick breakdown of some of what’s new and different in Crusade:

For more about how Crusade is different from GalCiv III proper, check out Wardell’s full guide on the update right here.