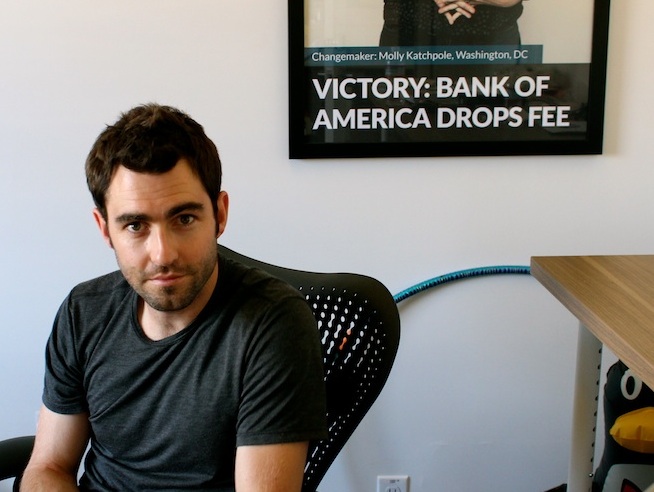 Startups often say their technology will change the world — a claim that seems wildly optimistic at best.

But step into the San Francisco offices of Change.org, the online petitioning site that is arming ordinary people with the tools to start revolutions, and you’ll be swept up by the mission. You won’t be alone. The movement is about 25 million people strong and is growing at a rate of 2 million memberships per month.

Can an individual spark a revolution?

Governments and corporations, they say, will be forced to listen if hit by thousands of signatures on Change.org, an army of Twitter and Facebook fans, and a few well-placed newspaper articles.

I meet Ben Rattray, the company’s charismatic CEO (pictured above), in his corner office. He’s weary from frequent travel: we joke about the “networking opportunities” during the red-eye flight from New York to San Francisco on Sundays. It’s typically jam-packed with tech execs returning from East Coast trips.

Directly behind his chair, a single photograph is framed in an otherwise sparsely decorated room. It’s the face of Molly Katchpole, the 22-year-old nanny who took on Bank of America. In November 2011, Katchpole’s victory was affirmed when 300,000 people signed her petition and the bank dropped its new $5 monthly debit card fee.

This is one of many recent campaigns that caught the attention of the global media. On Change.org, a trio of high school girls secured CNN’s Cindy Crowley as the first female presidential debate moderator in 20 years. One of the site’s members rallied hundreds of thousands of people to put pressure on the South African government to crack down on “corrective rape,” a term used to describe the horrific practice of a man raping a lesbian with the aim of ‘turning’ her heterosexual.

This post is part 3 of our “startup culture” series.
Be sure to catch part 1 and 2:

Something has shifted in recent years. Political activism is no longer the realm of the youthful and naive. Obama’s election and re-election were fueled by social media, and protests against SOPA and PIPA were staged on Twitter. Social media has created a culture of transparency that is making a site like Change.org truly effective.

“The strong thesis we hold is that people aren’t born apathetic, they are trained to be,” said Rattray.

“If you show them that their voice matters, you can radically change behavior.”

The company is hiring at a rate of two people per week and forecasts revenues of $15 million this year.

The blurry line between profit-making and change-making

And this is where Change.org has faced some criticism. Some say the company has crossed the line between change-making and profit-making; Clay Johnson, author of “The Information Diet” told the Wall Street Journal he has “huge problems” with the site as it is a “lead-generation business disguised as a social-change organization for whoever is willing to pay them for the email addresses.” He continued, “It’s dangerous to monetize ‘change’ because there’s an economic incentive to sensationalize.”

Certified as a B Corporation, the company makes its money through their cause-based ad model. For instance, the World Wildlife Fund might place a sponsored ad on a campaign that supports the environment, or might pay for Change.org to promote an existing campaign. It’s not dissimilar to sponsored tweets or sponsored links on Google.

Rattray claims the company is less concerned with the profit motive than with maximizing impact. To deflect critics, he uses the example of an ongoing engineering project to build a mobile offering that can be deployed in developing countries. This is not intended to make money.

He says Change.org, as a revenue-generating and angel-funded business has been able to offer its employees a competitive salary and benefits. Meanwhile, nonprofits are struggling to hire and maintain talent.

Why work at Change.org?

This week, the company brought on a high-profile CTO, Tom Hughes-Croucher, to lead the engineering efforts. The new hire has a strong reputation in the open-source community, and has worked as a technical evangelist at Joyent and Yahoo.

On the engineering roadmap is a plan to incorporate machine learning so members will be matched instantly to a petition based on their pre-existing interests.

“I’m really excited to be starting at Change.org because I know we have such an amazing opportunity to have an impact on the world here as well as some really interesting engineering challenges that come at the scale we operate,” Hughes-Croucher said.

Still, the company has not been able to lure quality engineers that are interested in a sky-high salary and large chunk of equity. “Eighty percent really care about the equity upside and a massive exit,” Rattray told me. “For the 20 percent that care about the mission, we are the fastest growing company in this space.”

The company has openings in communications and marketing, business development, customer support, and engineering. Check out the full list here.