Here’s a neat thing: There’s this startup that spies on a software maker’s customers to help that software maker figure out how to keep those customers happy. The startup, Frontleaf, has been busy with its private beta testing, but today it’s showing off what it can do at a demo day in front of enterprise-focused Silicon Valley investors.

Frontleaf, based in Oakland, Calif., closed a $450,000 round of funding last month with contributions from angel investors as well as the enterprise-focused Alchemist Accelerator, as part of that program’s fifth class.

Frontleaf started last spring. The company’s web-based tool helps software vendors identify which of their end users they need to focus on in order to maximize business.

Frontleaf does this by giving its customers a little beacon to plug into their own software, so Frontleaf can see exactly what its customers’ end users are doing. Then Frontleaf takes data from other sources into consideration — like the sales leads inside customer-relationship management software from Salesforce.com and the customer-service inquiries hitting services like Zendesk.

On top of that, Frontleaf speaks with executives at software companies to get a feel for which metrics they think are important. Those metrics serve as starting points for analysis. For example, for a recruiting software company, the number of job interviews could be a telltale sign of how much end users are getting out of that software.

Frontleaf integrates all of that data. It delivers a news feed of real-time activity and dashboards to show changes in the most critical metrics. It can separate users into categories, so a software company’s employees can make the best use of their time when they want to ensure their end users stick around. 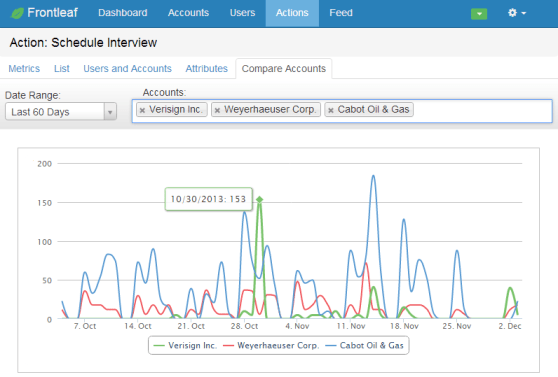 Above: A comparison of a software company’s accounts in Frontleaf.

And it seems to be helping at least a handful of software companies. Of the 10 companies participating in Frontleaf’s private beta last fall, half of them stuck around as paying customers, including Salsa Labs.

The idea is to help far more software companies determine the most important factors in the equation of what keeps end users happy, Tom Krackeler, Frontleaf’s chief executive and a cofounder, told VentureBeat in an interview.

“They’re relying too much on gut feeling or sort of common knowledge, when really you need to be backing this up with, ‘Here’s what our data really tells us,’ and refining that understanding over time,” Krackeler said. “I don’t think customer-retention teams have the right toolset to do that today.”

Krackeler has a good sense of the difficulties of the software game. At cloud software company Convio, he and Frontleaf cofounders Karl Goldstein and Rachel English launched what Krackeler called a “data-driven customer-success program,” because they couldn’t find anything that could help them understand which of the company’s customers were at risk of jumping ship and why.

“We said, ‘Wow, this is a big challenge, it’s a big problem, and it’s a big opportunity, and we decided to leave and start Frontleaf to kind of take what we had learned and make it a product that we could bring to market,” Krackeler said.

As of now, Frontleaf works with software companies on an annual basis. Looking forward, Krackeler wants to keep adding to the startup’s software. One idea is to help it show more up-to-date information about what’s driving risk, he said.

At the same time, Krackeler doesn’t want Frontleaf to become a completely self-service system with no human input from its customers. And that could help Frontleaf differentiate from companies like Totango and Gainsight that already provide analytics tools tailored to Software-as-a-Service (SaaS) vendors.

“I don’t think a black-box, predictive model works for customer churn prediction in SaaS companies,” he said. “I think it’s more complicated than that. It’s a matter of using the customer data that you have to refine and improve your intuition to get answers to questions that in the past you were probably sitting around the table, saying, ‘I think these things are reflecting who’s at risk.”

Time will tell if Krackeler’s hunch is right.