Do tech workers prefer small startups or tech titans when it comes to jobs? Neither. They actually opt for medium-sized companies, according to data collected by job site Indeed.

Unemployment is at a record low, and tech workers are in demand, so they have a lot of options when it comes to choosing a job. It turns out company size is a major consideration.

“When we think of the tech world, we often think of it as binary: composed of tiny incubators hoping their idea is the next big thing, on the one hand, and behemoth corporations with a city-sized campus on the other. But this excludes all the companies in between,” Indeed said in a blog post based on its survey of 1,000 tech workers.

Small companies are most common, but large companies employ the most people 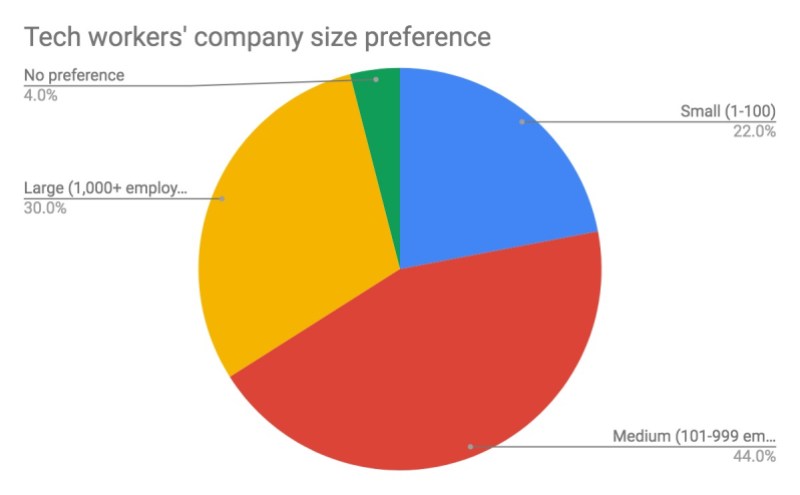 Above: Size preferences for tech workers.

But large companies employ almost half the population (46%), followed by small businesses (35%) and medium-sized businesses (20%).

To figure out the reasoning behind these preferences, Indeed explored the job attributes and benefits tech workers associate with companies of different sizes.

When asked what factors are most important to them in a role, tech workers cite job stability, flexibility and work-life balance, and salary. But when Indeed broke this down by company size preference, different priorities emerged.

But there’s another important factor. Those who prefer a small (35%) or medium-sized company (35%) believe their work will have a significant impact at these organizations. In comparison, only 30% of those who want to work for a big company believe they will have a major impact.

Whether you work for a large or small company, to attract tech candidates you need to offer competitive pay and perks, publicize them, and make sure both are mentioned early in the interview process.

Zappos is an example of a large company going above and beyond to attract talent through perks. Not only does it go big on benefits, such as offering free health insurance for individuals, the company also lavishes employees with extras, like concierge dry cleaning and car washes. 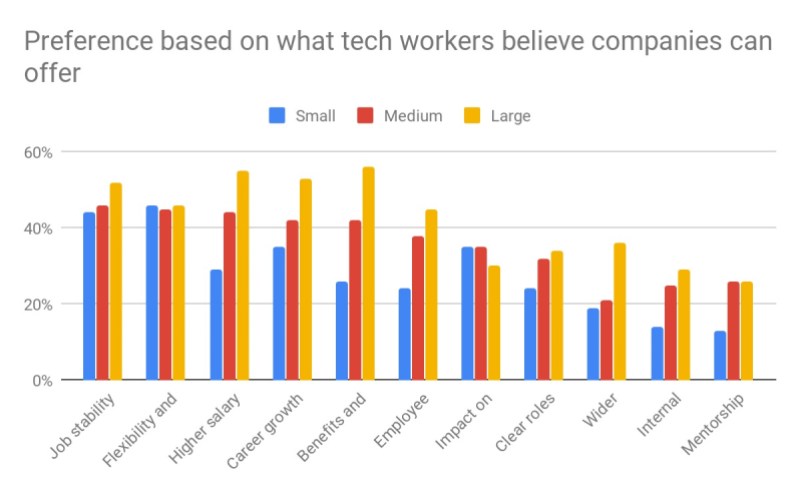 Above: How tech workers view benefits of a company’s size.

Workers who prefer medium-sized companies are most likely to say that giving back to the community and diversity — not only in leadership, but also in their departments and on their teams — are important factors.

Email marketing company Sendgrid is a leader in giving back to the community, pledging to donate 1% of its equity over the next 10 years. It also has a number of employee-led volunteering opportunities, including teaching coding at the Boys and Girls Club and a community week, during which employees volunteered over 1,000 hours in 2018. 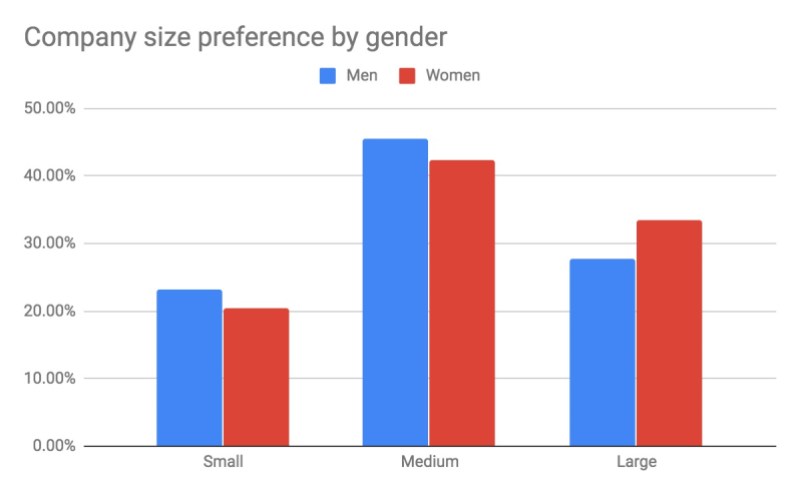 Above: Company size preference by gender

Though medium-sized and large companies are more popular among tech workers, small companies are by no means unpopular: Nearly one-quarter (22%) of respondents prefer them.

More respondents who prefer small and medium-sized companies feel their work could have a bigger impact in these environments. Other surveys have shown similar results. In general, workers at small companies enjoy seeing the impact of their work and feel they are “noticed more often by people who matter.” Most people who have transitioned from large to small companies also feel more appreciated.

For women, flexibility and work-life balance are the main reasons they’d like to work at a small or medium-sized company. And they value job stability regardless of company size. But better benefits and perks steer women toward a medium-sized or large company, and a higher salary is a unique draw for large companies.

For men, job stability is the number one reason they prefer a small or medium-sized company. Like women, they’re also drawn to these companies because of the flexibility and work-life balance they expect from them. Higher salaries are a pull for men who prefer medium-sized and large companies, as are better benefits and perks.

Tech workers associate different attributes with companies of different sizes. Those who prefer a small or medium-sized company are driven by the expectation that their work will have a measurable impact. And those who prefer larger companies do so in part because they expect to get higher salaries.

However, Indeed said a number of factors are important to all job seekers, regardless of company size preference. Flexibility and work-life balance, for example, were valued almost equally by all tech workers in the survey.

No matter how large your company is, focusing on the three most-valued job attributes — stability, flexibility and work-life balance, and salary — can help you attract tech workers in a competitive environment. And you should make sure these perks are publicized. The more you pay attention to specific job-seeker preferences, the better equipped you’ll be to attract top tech candidates.