StartupSearch is a new site that gives you quick statistics and other data on Web 2.0 start-ups. It is built by Niall Kennedy, a former Technorati and Microsoft employee.

Kennedy wants to make it easier for people to find out more about promising young companies (see his blog post here). Once they’ve gotten steady traction in the market place, he’ll retire them from the list. For now, he’s focusing on a hundred start-ups, ranging from Twitter to Digg.

Take the example of Twitter. A profile page gives you quick stats, a map of where it is based, the latest photos tagged with “Twitter,” bios of top executives, and its “traffic” and buzz” scores. The traffic score comes from a blend of Web traffic stats from Alexa, Compete and Quantcast. Each of these sources are broken down on a separate “traffic” page.

The “buzz” page (this is a Flash site, so you’ll have to hit the “buzz” tab) is also based on a blend of factors, including the number of times the company has been cited on the Web lately — using Yahoo and Technorati data — and searched for. See screenshot below. Each company has a product page, listing its products. In the Twitter case, it is just one.

The site also lists a start-ups rounds of investments and investors, and lets you search by investor name too — additionally giving investors a ranking based on the success of their investments.

The site just launched, and so is still a work in progress. The buzz factors and VC ratings don’t mean much right now (by default, a start-up that does well gets retired from the list), but it’s a useful start for those of us who are trying to get a quick read on the youngest companies and how they’re doing relative to each other. The user interface will be improved too, to make it more intuitive, Kennedy said.

Kennedy also says he wants to keep it free. It is sponsored by True Ventures, an investor in news site GigaOM. Kennedy is looking for other sponsors. He said a free resource is more widely useful than paid or proprietary databases. Word has spread lately that such databases are being built by Techcrunch and Guidewire. Those groups hold conferences and request companies to provide them with otherwise confidential data. 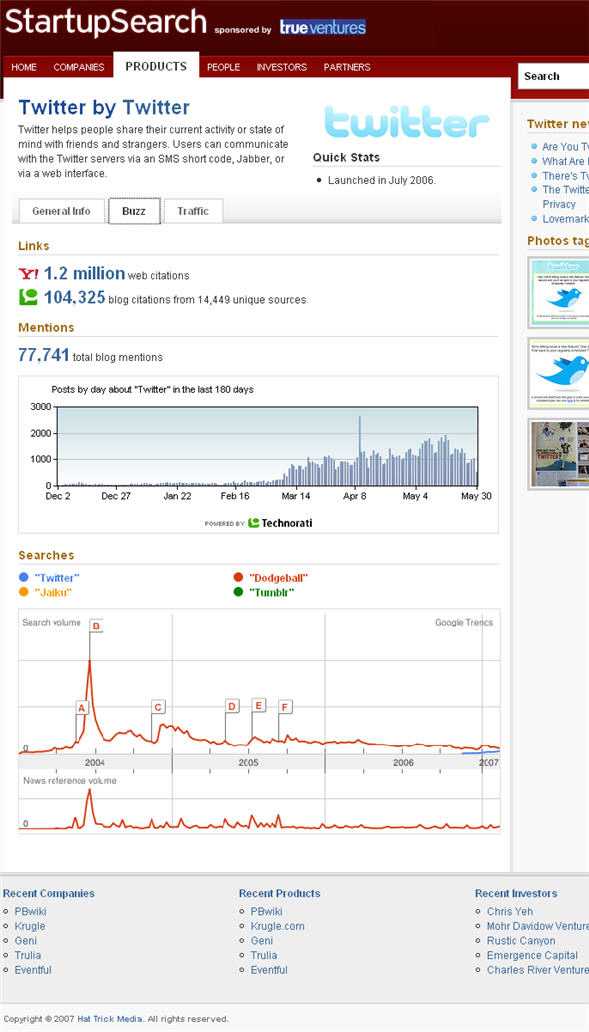