Android has passed Windows as the most-used operating system online, according to StatCounter. The milestone is based on total internet usage across desktop, laptop, tablet, and mobile combined.

More specifically, Android saw usage market share of 37.93 percent in March, while Windows accounted for 37.91 percent. This is the first time Android has passed Windows, though these numbers will naturally fluctuate. iOS followed with 13.09 percent, OS X took 5.17 percent, and Linux accounted for 0.75 percent.

StatCounter measures usage market share by examining aggregate data of about 15 billion pageviews per month across its network of over 3 million websites. The results thus tell a story of what platforms are used the most, as opposed to which ones have the most users (for user market share, you’ll want to look at data from Net Applications). Put another way, StatCounter is saying Android is used more than Windows, when looking at total pages visited, but it may or may not have more users — one person naturally visits more than one page. 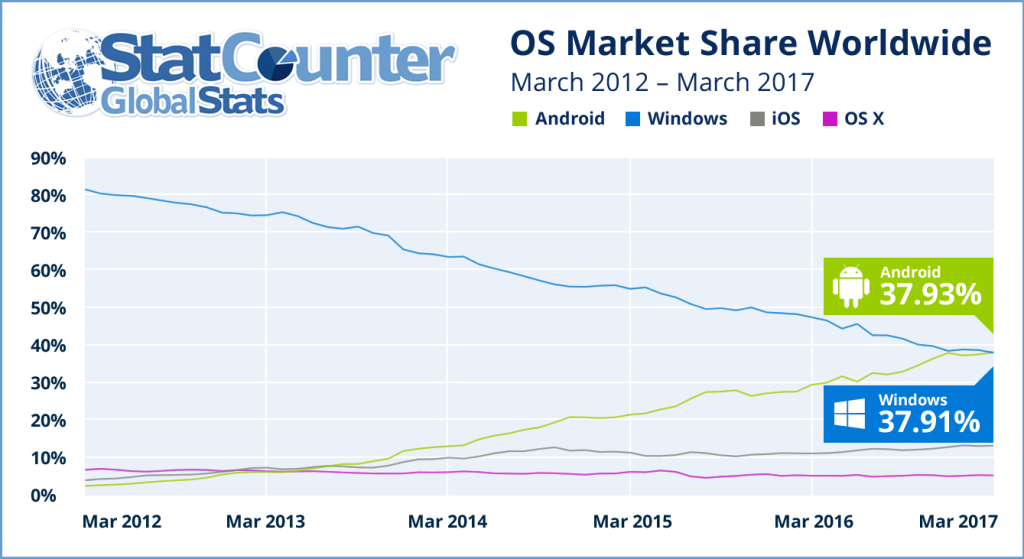 “This is a milestone in technology history and the end of an era,” StatCounter CEO Aodhan Cullen said in a statement. “It marks the end of Microsoft’s leadership worldwide of the OS market which it has held since the 1980s. It also represents a major breakthrough for Android which held just 2.4% of global internet usage share only five years ago. Windows won the desktop war but the battlefield moved on. It will be difficult for Microsoft to make inroads in mobile but the next paradigm shift might give it the opportunity to regain dominance. That could be in Augmented Reality, AI, Voice or Continuum.”

Windows dominates the desktop market while Android dominates mobile, so this isn’t a surprising result. As mobile growth continues to dwarf traditional PC sales, Android will likely increase its lead over Windows.