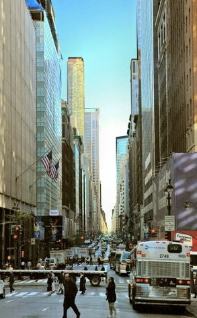 Silicon Alley technologists and Madison Avenue advertising executives have been meeting yesterday and today at the AlwaysOn OnMedia NYC conference. Here are some of the trends people were talking about:

– Ad networks were the darling acquisition targets of 2007, but what are they worth?
– Content versus community ad-targeting is emerging as a major debate
– The gap is widening between the proportion of people online, and the proportion of ad dollars spent online

Ad networks were the darling acquisition targets of 2007 but what are they worth?

The $10 billion spent on aQuantive (Microsoft), DoubleClick (Google) and 24/7 Real Media almost eclipses the entire amount of money spent by advertisers on online advertising in 2007.

Now, some are questioning the entire concept of these ad networks, as big media companies try to reclaim their ad inventory instead of passing it to the networks. “The idea of an ad network is… disaggregating the ad spend from the content. And you can only push that so far before the content becomes less good,” contended Jim Spanfeller, President of Forbes.com, at one panel yesterday.

The Wall Street Journal’s web properties, Facebook, MySpace and other large sites, are opting for guaranteed revenue from Microsoft and Google.

We’ll see some big media companies start to reclaim their ad inventory in 2008. One of the biggest companies in the business — which I just heard about but won’t name — is in the process of aggregating all of its web properties into an ad network. While I doubt it will be able to do a good job of monetizing ad impressions, the large sales forces at it and some of these other companies are going to try.

Ad networks are now going to have to battle stepped up publisher efforts in addition to each other for dollars. Hopefully this will fuel improved targeting technologies, new methodologies and ultimately increased profits. One thing is for certain: Not all of the hundreds of ad networks on the market are going to get acquired. Not all of them are going to be able to court sustained brand dollars beyond a test buy here and there. Madison Avenue has too much structural inefficiency to give them all time for a sales pitch.

Content vs community is emerging as a major debate:

In the TV world, advertisers attach ads (like beer) to pieces of content (TV shows) that are associated with specific audiences (men, ages 18 to 25). The problem is, online advertisers, including many tech start-ups, are trying to attach ads to content in the same way. But the advertisers don’t want to get close to user-generated content, like party pictures of people drinking beer on Facebook.

But, online ads should follow users and communities, since users are the ones to decide what content they want to put where, says David Carlick, Managing Director at Vantage Point Venture Partners.

“[I] say no, now you [the advertiser] are sponsoring the consumer—not the content online, but what they want to do online. If they want to go on MySpace and look at half-naked drunk photos, who are you to say that’s not good for my brand? You need to go where the people are and sponsor what they do, and not attach yourself to the 5% of content that looks like TV.”

It’s a minority opinion in the ad industry, but as Jeff Jarvis notes here, a potent one. Digital content is less about free-standing web sites these days, as users share videos, blog posts, and widgets with each other across sites, and as big media (like CBS) starts to push their content out to multiple distribution partners. At the same time, digital content is starting to flow off the PC and onto mobile and ipTV platforms.

This dual flow is changing how we interact with digital content and ads. It’s starting to push a proliferation of ad formats (beyond pre-roll, overlay, interstitial, banner, etc) and ad targeting paradigms (beyond contextual, demographic, social, behavioral).

As an example, Ben Bajarin, a futures TV strategist, mentioned situational targeting, what a user is doing as they’re using a mobile device: “How do we get situationally relevant content to them?”

We can expect to start seeing more ad models that allow for the ad message to travel around with content, or that, like behavioral targeting, follow the user regardless of the content they’re consuming. Perhaps we can even mesh the two approaches together, as Facebook’s Beacon, widget companies like YourMinis, and start-ups like ShareThis are starting to do.

The gap is widening between the proportion of people online, and the proportion of ad dollars spent online:
People are moving online faster than dollars are, and that will continue for a while (latest Comscore stats here). It’s still too hard to buy digital media ads, and too easy to buy millions of eyeballs on broadcast. Sean Finnegan, former chief executive of Omnicom Media Group Digital (more on that in a minute), says one challenge “is for a brand marketer to get a single or sequential messaging to the multiple touch points out there. That does implicate [people who create the ads themselves]. Agencies can no longer rely on that single 30-second spot [ad on television]. There have to be hundreds of iterations of it. Then you get into the buying part.”

Note: For more on branded advertising, see this article I recently wrote.

The opportunity to develop new forms of advertising that reach the growing online audiences is pulling some big-media executives into the startup world. Finnegan, for example, who spoke on several panels at AlwaysOn event, just defected to advertising startup Vibrant Media to serve as its chief marketing officer. Paran Johar, another industry heavyweight, left his post as EVP of Digital Marketing, North America at McCann to take a post as CMO of well-funded mobile start-up JumpTap.

If these start-ups simply needed good marketing they’d hire an agency instead of hiring a CMO. My bet is that these startups are looking for an inside track to advocacy on Madison Avenue, higher profiles and ultimately, brand dollars coming to their new ideas.

(Picture of Madison Avenue via.)