Technorati‘s annual State of the Blogosphere report captures the shifting demographics of blogging. This year’s report shows that bloggers are becoming more mainstream, are using more tools for social media and closer engagement with their readers, and are expanding to new platforms such as mobile phones.

Technorati hosts lots of blogs and provides a search engine for them as well as a portal for all things about blogs. About 25 percent of all bloggers are already engaged in mobile blogging. And 40 percent of those who report blogging from their smartphone or tablet say that it has changed the way they blog, meaning they write shorter and more spontaneous posts.

As for social media, the lines between blogs, micro-blogs (such as Twitter), and social networks are disappearing. Blog posts are increasingly shared through social networks.

Women are becoming more prominent in the blogosphere as the “mom blogger” category takes off. Those female bloggers are far more likely to write about brands, which in turn are attracting advertising to the female blog sites.

Bloggers are also quite optimistic about their medium. Over half of respondents plan on blogging more frequently in the future. Some 43 percent plan on expanding the topics they blog about. Bloggers who get revenue from blogging are working more this year than last year. And 48 percent of all bloggers believe that more people will be getting their news and entertainment from blogs in the next five years than from traditional media. About 40 percent of consumers agree with that last point, even as consumer trust in mainstream media is dropping.

Technorati said 7,200 bloggers voluntarily responded to its survey this year; that was its largest response ever. About 64 percent of respondents said they were hobbyists. Some 51 percent of the hobbyists say they blog to express their personal musings, and 74 percent say they measure the success of the blog according to their level of personal satisfaction. Last year’s survey said 72 percent called themselves hobbyists.

Part-time bloggers account for 13 percent of blogs. About 61 percent say they spend more than three hours blogging each week, and 33 percent say they update their blog at least once a day. Part-timers blog to supplement their income or blog as part of a full-time job. They report an average non-salary income of $6,333. About 63 percent of the part-timers say they measure the success of their blog by the number of unique visitors, while 56 percent do it for personal satisfaction.

Self-employed bloggers make up 21 percent of bloggers. They blog full-time or occasionally for their own company. Some 57 percent say they own a company and have a blog related to their business. About 19 percent report that their blog is their company. About 65 percent say they manage the blog by themselves, and 62 percent say they have greater visibility into their industry because of blogging.

One number that is missing is the number of blogs. It is getting increasingly difficult to track blogs across all platforms, so Technorati evidently gave up on the attempt. Penn Schoen Berland conducted the Technorati survey on the web from Sept. 21 to Oct. 8. The margin of error is 1.2 percent. The consumer survey was conducted by Crowd Science across Technorati’s Media network. 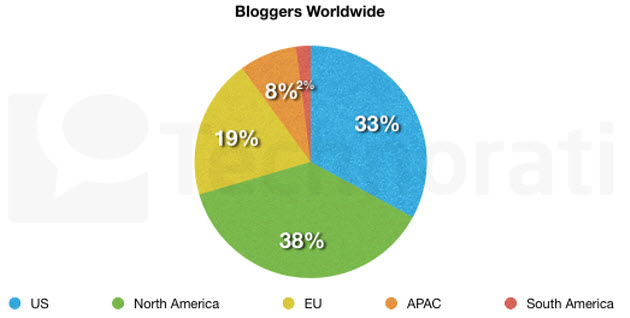