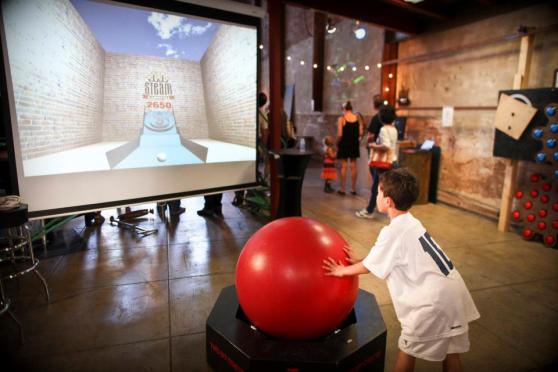 The STEAM Carnival is your typical geeked-out carny attraction, with fire, lasers, robots, and LED lights. Just another night at Burning Man or the Maker Faire, right?

But this carnival has a mission: To get kids excited about science, technology, engineering, and mathematics — the STEM disciplines that many educators feel are especially critical — as well as art.

Better yet, it may be coming to a school near you.

STEAM Carnival is the brainchild of two Los Angeles-based engineers and entertainers, Brent Bushnell and Eric Gradman, who do business as Two Bit Circus. The pair were involved with Syyn Labs, a collective that produced an enormous, complicated, amazingly fun Rube Goldberg contraption for an OK Go video a couple of years ago. Together, they’ve been spending several years putting on shows with their inventions, which combine LEDs and Arduino chips into interactive entertainment and education experiences. Now they’re about halfway towards a $100,000 fundraising goal on Kickstarter, and with 20 days to go, I’m pretty confident they’ll hit that target.

By dropping an A for “art” into STEM, you get STEAM, which is not only a cooler word, but also a more inclusive, all-embracing concept. The STEAM notion comes from John Maeda, the president of the Rhode Island School of Design (RISD). Once they heard about it, Bushnell and Gradman latched right on.

“As someone with a strong engineering background, I was starting to burn out on engineering, until I discovered I could also make art with it,” said Gradman, during a recent phone interview. “Discovering that I could use science, tech, engineering, and math to make art transformed my life.”

What’s more, art is suffering from many of the same problems as STEM education is: Lack of funding and the absence of strong champions in many school districts. As a result, it’s hard to get kids excited about it.

The STEAM Carnival hopes to tackle that with a clever, interactive approach to the old-fashioned carnival. A few months before the carnival arrives in town, they’ll send project kits to participating schools. Kits might include parts for children to make musical robots, or perhaps battlebots. Students will spend the next few months building things based on the kits.

Meanwhile, Gradman and Bushnell will be putting the finishing touches on an array of modernized carnival attractions, from ring-the-bottle games with fire effects to a Tesla-coil-enhanced strength test, where instead of a puck ringing a bell after you slam down a sledgehammer, you get to see a blue spark rising up. They’ll load the carnival onto a boxcar and put it on the rails.

Once it arrives in town, the STEAM Carnival will include games and attractions you can play, but it will also include shows that incorporate the kids’ projects.

With the $100,000 funding, the duo will be able to put on a preview show, ship out kits to selected schools in L.A. and San Francisco this coming Fall, then put on the full carnival in the Spring of 2014, first in L.A., then in San Francisco.

See their Kickstarter video below.