Last week we covered Jawbone’s noise-cancelling bluetooth headset, but this week STEP Labs debuted a headset technology that STEP chief executive Robert Mitro says will blow the competition out of the water.

Mitro says STEP’s technology creates a virtual acoustic bubble six inches from your mouth, so that all the other noises are blocked away. He says its minimal processing power, instantaneous voice transmission and lack of voice distortion give STEP an edge over its competitors. It also doesn’t require a skin sensor.

The benefit is that bluetooth headsets enabled with STEP’s technology allow clear, consistent voice communications in severe, high-decibel noise environments, such as a rock concert or a trade show. But the technology goes beyond wireless headsets and cell phones. STEP aims to be the “Intel inside” of all things audible, including auto (voice recognition), medical (ultrasound), and military (sonar/radar). Watch the video here.

The company showed off its STEPware Headset Monday at the Consumer Electronics Show in Las Vegas. It used a talking mannequin called Nadine to demonstrate clear voice reception even in a 92 to 95 decibel range. It’s in stealth partnership with three headset manufacturers in Asia, Europe, and the U.S. to release a bluetooth headset “soon.” 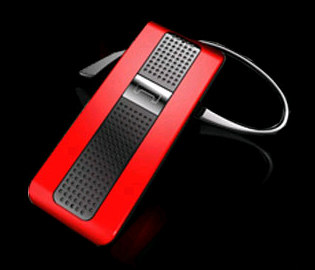 “We think we have the story of 2008. We feel we’re superior — in every way — to anybody else,” says Mitro, who worked 17 years at IBM and has been involved in eight successful startups, seven of which had successful exits, he says. Mitro has registered a number of patents for its “voice separation” tool.

The company has just raised a $6.5 million in a second round of funding from Gabriel Venture Partners, which led the round, Individuals’ Venture Fund, Garage Technology Ventures, Garage Canada, North Coast and individuals.

The company, founded in 2003 by a host of engineers, has Dr Jon Taenzer on staff — one of the “top five” acousticians in the world, according to Mitro. STEP spent three years building intellectual property and then brought Mitro on board as Chairman and CEO. He also personally invested in the business, although he won’t say how much. After Mitro came on board the company decided to focus on the bluetooth headset market, because it was the easiest to get into. Now they’re expanding beyond headsets. The company installed the technology in a Cadillac XLR convertible, which was driven top-down at 70 mph and still produced clear voice reception, he said.

STEP Labs’ second financing round actually closed in October, but a chance encounter on an airplane with an investor — whose principal investment is in a headset manufacturing company — led to STEP opening the round back up. Another investor, Scott Chou, a partner at Gabriel Venture Partners, said he once threw a cellphone headset out his car window because the quality was so poor. He said headsets using STEP’s technology are better than any other he has used.

We haven’t tested the technology yet, but when we do, we’ll let you know if it lives up to the hype.