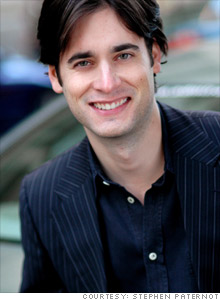 As the battle between Hollywood and high tech reaches a fever pitch, serial entrepreneur Stephan Paternot has an idea that strikes at the lifeblood the movie biz: funding from independent producers.

Inspired by AngelList, Paternot founded Slated, a private marketplace for accredited investors to track and back independent film projects.

“What you’re seeing with Hollywood is the result of a dysfunctional incumbent desperate to save itself,” said Paternot. “What we need is not just new methods of distribution, like Netflix and Hulu, but going farther up the food chain, to find new platforms for creating big budget independent films.”

Parternot has long been ahead of the curve. He founded The Globe, one of the earliest attempts to build an online social network. It was the most spectacular IPO of the dot-com boom, and also one of the biggest busts when the bubble burst. His experience with the public markets got Paternot thinking about alternative systems for funding.

“Hollywood is bleeding the investors in their own films dry,” said Paternot. “Phase two of Slated will be closer to SecondMarket, where we act as registered broker-dealer and make sure that the investors who risked the most on producing these films get to see their fair share of the rewards.”

A good example of “Hollywood accounting” would be “Harry Potter and The Order of the Phoenix”, which took in $938 million in revenue, yet still produced a $167 million loss. In cases like this the distributor, Warner Bros., still makes a bundle, but the film and its backers, set up as a independent corporation, wind up in debt.

How is this possible? You can get a more detailed picture in this episode of Planet Money, which details how Disney paid itself more than $200 million in distribution fees on the Nicholas Cage vehicle “Gone in 60 Seconds.” The film made a lot of money for Disney, even while the corporation created to produce “Gone In 60 Seconds” was a loser on the official accounting.

“I’ve been investing in ideas around crowd sourcing for a while now. I backed IndyGoGo and Lending Club.” Paternot told Venturebeat by phone. “To me, finding more efficient ways of allocating capital is going to be the next big wave of successful internet companies.”

Hollywood and the tech industry have come to view one another as an existential threat, even though they depend on one another in many ways. Many in the tech industry thought SOPA and PIPA, bills backed by the entertainment industry, would destroy the internet. In response Paul Graham, the Svengali of of the startup community, posted an essay calling for ideas that would kill Hollywood.

Just like AngelList, Slated will need to establish a critical mass of well-respected talent and investors if it hopes to succeed. “We know that social proof is one of the big factors that made Angellist succeed,” said Paternot, who has been learning the movie business since 2004 as the founder of Palmstar Entertainment.

So far it has signed up producers from notable indie films like The Kids Are All Right, Waiting for Superman, An Inconvenient Truth, and The Station Agent. On the actor side it has projects starring names like William H. Macy, Sam Rockwell, Liv Tyler, and Felicity Huffman. Slated claims to have over $100,000,000 in capital lined up on the investor side already.

Why can’t the small studios and specialty divisions of Hollywood handle this business?

“Unfortunately, Hollywood remains inefficient, insular and opaque, always acting as an agent between investors and the projects that need their capital and collecting its ‘fees’ on the backs of investors,” Paternot declared. “Combine this gatekeeper mentality with the closed communication silos of the agencies and studios, and the results are massive inefficiencies across all levels of the industry, especially in the movement of capital.”

It’s far too early to tell if the film industry will take to this new marketplace. But if the growth of pledges on Kickstarter and shares on SecondMarket is any guide, there is very healthy appetite for new channels through which to invest in the private projects which were once the domain of Wall Street and Hollywood.