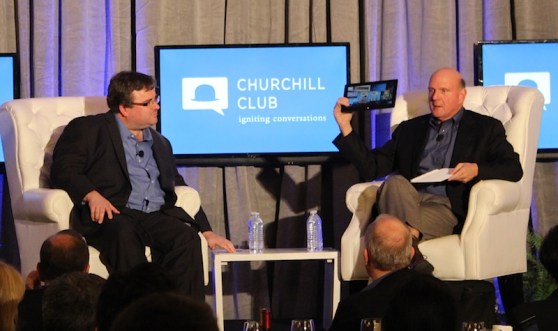 SANTA CLARA, Calif. — Steve Ballmer has all his troops lined up, and he’s ready for a massive, multi-pronged attack on the entire tech universe.

Consumer services, devices, software, enterprise services, video game consoles, Internet telephony, media and entertainment content — Microsoft stands ready to deliver it all. And to hear Ballmer tell it, Microsoft is not only in a great position to succeed at all of these businesses, it might be just about unstoppable. And it all comes down to Windows — in its desktop and mobile varieties.

“The ecosystem of Android is a little bit wild,” Ballmer said.

“Strategically, we think there’s a place to be the best of organization and the best of diversity. We think there’s an unmet need with the operators. From the consumer perspective, all these darn phones look basically the same, and there’s a lot of opportunity to have a different point of view.”

Ballmer appeared onstage with LinkedIn founder and executive chairman Reid Hoffman for a discussion hosted by the Churchill Club, a public-affairs forum in Silicon Valley. About 760 people attended the event, packed into the ballroom of the Santa Clara Marriott for a dinner of hotel chicken followed by disruptive discussion. It was the largest Churchill Club event in a decade.

It was a rare chance to see two giants of the tech industry speaking together at the same time. Hoffman founded LinkedIn in his living room in 2003 and built it into a public company whose market capitalization is now somewhere around $10 billion. (Hoffman also now serves as a partner at venture firm Greylock Partners.) And Ballmer is the longtime CEO of one of the biggest software companies of all time.

He’s got more modest goals than immediate total domination, however.

In fact, Ballmer said, wireless carriers are clamoring for a third alternative to the current high-end leaders, Apple and Samsung. Microsoft is just the one to deliver it, he says.

“We’ve got a customer set that wants an alternative; we’ve got a differentiated point of view” — and the product, he says, is appealing.

And there’s more innovation to come.

“If anyone thinks we’re at the end of the hardware innovation chain in pocket devices, I think that’s nuts,” Ballmer said.

The installed base of Windows 7 systems — over 670 million worldwide, Ballmer said — will help drive the success of both Windows 8 and Windows Phone 8. Those who have Windows 7 will want to upgrade, because it’s faster to boot, uses fewer system resources, and offers more IT controls. And those who have Windows-based enterprise applications will want their employees to use Windows 8 phones to access them, because those phones will integrate more seamlessly with existing client-server and cloud based applications that use Microsoft’s architecture.

“You really want to be on Windows and Windows Phone with client applications. We will have volume, and I think that will be clear soon.”

Ballmer spoke about the challenges facing Microsoft now as it transitions to a less PC-centric world, although he didn’t drop any bombshells or unveil anything particularly surprising — unless you count his amazing level of confidence about the potential for Windows Phone 8, the company’s mobile operating system, which currently has a market share somewhat comparable to that of RIMs — that is to say, a tiny, single-digit slice of the overall smartphone market.

For instance, Hoffman asked Ballmer how Microsoft was managing its forays into hardware manufacturing with the Surface — a move that has angered many of its original equipment manufacturer (OEM) partners.

“Carefully,” Ballmer said, to chuckles from the audience.

More explicitly, Ballmer described the careful dance of negotiating with OEMs and other partners to drive innovation forward and stated that Microsoft has taken a different approach in each market. For instance, it went it alone in the game console market when developing the Xbox because there was no way get hardware partners excited about the idea of selling consoles at a loss and making that up through sales of games. In mobile, Microsoft carefully designed a set of specifications and worked closely with hardware makers to create Windows Phone-based handsets. In the PC sphere, Microsoft continues to support the very open standards of the market while creating its own hardware, the Surface, to extend the market. In each case, it took the approach most appropriate to the market and to the innovation needed.

“There’s no way something like Kinect gets invented unless you’re doing both hardware and software,” Ballmer said. But now that it exists, Microsoft is extending Kinect into the PC ecosystem, where PC makers can use it to extend the capabilities of their devices.

Ballmer’s not worried about the possibilities for freemium models or inexpensive web content to drive down the value of software that people actually want to pay for. Ballmer noted that the recently-released game Halo 4 did $220 million in sales in its first day or two.

Perhaps the most characteristically enthusiastic Ballmer moment came when Hoffman asked him a question from the audience: What aspect of the consumer reaction to Windows 8 surprised him the most? 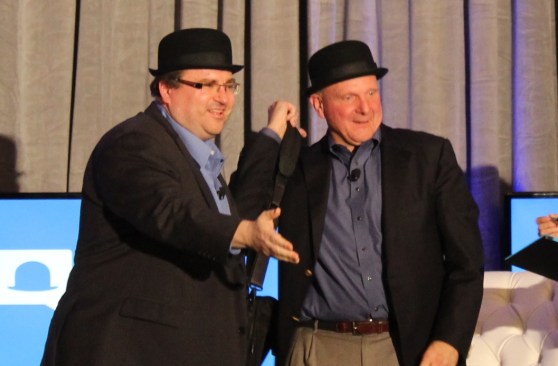 Above: Hoffman and Ballmer wearing bowler hats, a symbol of the Churchill Club.