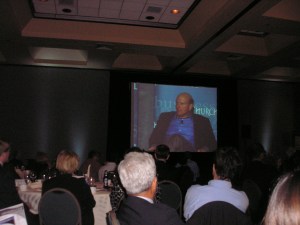 You can always count on Steve Ballmer for a good chuckle. I always shake my head at how this guy became the chief executive of Microsoft when he should have been a hoarse-voiced football coach. The ever-charming Ballmer was on stage tonight at a Churchill Club event in Silicon Valley. Ann Winblad, venture capitalist at Hummer Winblad Partners, interviewed him for an hour on a wide range of subjects.

Ballmer showed a few cards, expressed some opinions, and then cracked jokes when he couldn’t talk about something. Regarding the economic crisis, he said he didn’t have “anything all that interesting to say” on the impact on Microsoft’s business just a week from the end of his fiscal quarter. But he noted there was economic “bouyancy,” meaning the economy wasn’t sinking, because the rest of the world isn’t hit as hard as the U.S. Consumers also haven’t been hit as hard as the banks.

“Nobody is quite sure how bad the fallout will be, either from the credit crisis or” the expected bailout, he said before the crowd of more than 500 people at the Hyatt in Santa Clara, Calif. “People I talk to are now relatively optimistic and they feel better than you would if you watched CNBC all day.”

Ballmer talked about Project Red Dog, which will express Microsoft’s belief that applications shouldn’t be based in the Internet, or cloud, alone. Rather, apps should run as “software plus services,” which distributes processing across both the cloud and the desktop computer. He said he couldn’t talk Project Red Dog now but Microsoft would reveal it in about six weeks at its next developer conference in Los Angeles. It’s a cloud-computing service that Microsoft will launch for application developers. Presumably, Red Dog is Microsoft’s answer to Google’s App Engine and Amazon’s web services.

Winblad quizzed Ballmer about competition from “software as a service” models embraced by Salesforce.com and ad-supported models pioneered by Google. Ballmer argued that Microsoft’s traditional business of commercializing and selling software is still working but the company is also experimenting with alternative business models. Ballmer said Microsoft’s money-losing online unit is a distant third in search but he would continue to pour 5 to 10 percent of total operating income — or billions of dollars — into gaining share in the search market. Right now, Google has more than 70 percent share while Microsoft has just 9 percent.

He pointed to Seznam, the search engine in the Czech Republic, which has more market share than Google and is thus “the best case study out there” on how to beat Google. Winblad said that Microsoft would have to show its usual “patience and tenacity” in the Internet search market. Ballmer responded, “I would call that a way of life.” Asked if Ballmer had any advice for Google on antitrust matters, Ballmer said, “I would probably keep that advice to myself.”

When Winblad mentioned that Windows is still a $25 billion a year cash cow in terms of operating profits, Ballmer said, “I’m glad to have that cow in our pasture.”

On the consumer side, Ballmer said that the company would continue to concentrate on the PC, the TV (including Media Room IPTV software and the Xbox 360), and smart phones. In the TV arena, he noted that “software plus services,” with software both in the devices and at the head end (which serves things such as videos or online game services to homes) is prevailing.

Putting down Apple’s gains with the iPhone, Ballmer noted that Microsoft is strong in the smartphone software market, with a No. 2 position second only to Nokia. He said that Microsoft’s plan of focusing on software only with Windows Mobile would allow it to hit a much broader set of phones than Apple can with its iPhones that use both Apple hardware and software.

He said that all vendors have to do more to make software work across all smart phones, noting that the smart phone market is a lot like the PC market was in 1983, with fragmented standards and interoperability problems.

Ballmer said that Microsoft would continue to buy about 20 companies a year, with a few big deals each year. But the company would also keep spending $9 billion a year, or 14 percent of revenues, on internal research and development. An omen for Silicon Valley: about 10 companies that Microsoft bought are in Israel; hence, not every new idea is coming out of the valley these days. Asked if he thought about buying Yahoo in 2006, Ballmer said it may have been in his head. But that was it for the Yahoo saga.

Joking about Bill Gates’ new acting career in the Seinfeld commercials, Ballmer gave his football coach yell, “He’s hot baby!” Asked what advice he had for CEOs of small companies, he said that leaders should “pick the right business to be in.”

In the Q&A, Ballmer got some laughs. When one guy complained about Windows crashing, Ballmer said he would meet the man later and fix his computer himself. But he also said that 5,000 of Microsoft’s 91,000 employees go to work each day solving that problem and that crashes are becoming less frequent than they were.

Asked about what young kids should study to prepare themselves for future jobs, he said that economics and computer programming should be taught as early as high school to prepare kids for the real world. Asked again how the economic crisis would affect the tech industry, he said, “It’s not clear where it goes next.”